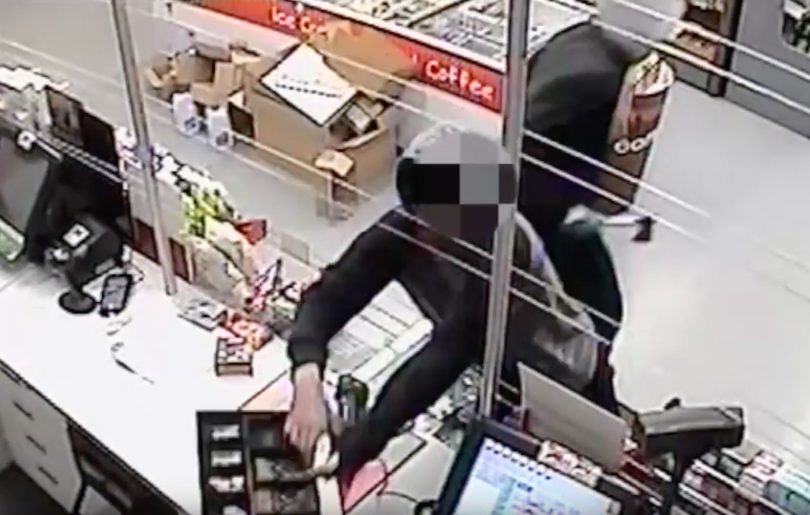 Two male offenders threatened a Holt service station attendant with a hatchet before making off with a small sum of cash and the cash till early today (6 October).

ACT Policing said the pair entered the 7-11 Service Station in Holt about 3.10 am, approached the counter and demanded cash.

The CCTV footage shows one of the offenders waving a hatchet and menacing the attendant, who hands over the till.

When the offenders left the service station, they headed north towards Holt McDonald’s.

The first male is described as aged in his early 20s, around 185cm (6’1”) tall, Caucasian in appearance, of slim build and dark hair. He was wearing a beige bucket hat, black hoodie with a grey hood, blue trackpants and black shoes.

The second male is described as aged in his teens, around 170cm tall (5’7”), Caucasian in appearance and of slim build. He was wearing a black beanie, grey and blue zip up hoodie, black trackpants and white and grey sneakers.

Rob - 8 minutes ago
Maybe if the government concentrated on ACT issues, we’d have a decent integrated public transport system, we’d have a ho... View
News 10

Treena Loiterton - 52 minutes ago
Geoff Richardson what about dumping every single record about war/defence on the steps of the memorial and getting them to ke... View
Richard Grainger - 5 hours ago
That building is simply storage. The cost that the Archives desperately need funding for is to digitise the records. A lot of... View
News 64

Ray Ez - 1 hour ago
Tiger Fit so no memorials for anyone?? Did you think that maybe this sort of thing helps a lot of veterans? View
Ray Ez - 1 hour ago
Ian Pearson you do understand the consultation was not a vote? They asked for people’s opinions. They are under no obligati... View
Ian Pearson - 2 hours ago
Concur - while Stalin might have said that numbers have a quality of their own, presumably the NCA did not agree. View
Business 1

@The_RiotACT @The_RiotACT
Police have not yet released the name of the man fatally shot on the doorstep of his Phillip townhouse late on Thursday night (10 June). Investigations are continuing https://t.co/iXGyIpzjHl (32 minutes ago)