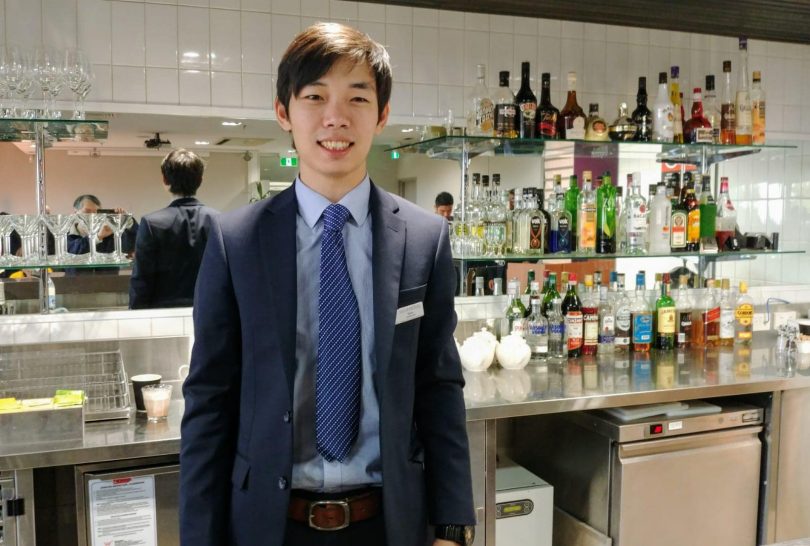 A near-fatal snowboarding accident in 2016 has meant it’s been a long road for Shen Lo to begin work as a qualified chef. Photo: Supplied.

“In Taiwan, we say stand up from where you are falling,” says Shen Lo.

It’s taken three years, but Shen, 28, has recently returned to where he fell during a serious snowboarding accident in 2016 to reclaim the life which was interrupted.

The 2019 ski season brings Shen back to Perisher and a job, as a chef at The Sundeck Hotel.

From the perspective of Cliff Wallis, owner of The Sundeck and now Shen’s Australian residency sponsor, Shen’s accident three years ago was a fraught time.

“Shen had been snowboarding in the Leichhardt Terrain Park when a jump had gone wrong and he landed on his head, smashing his helmet. The call-out to the ski patrol had been ‘code red’ and the prognosis did not look good,” Cliff says.

Adding to the stress of not knowing if Shen would be okay was the fact that attempts to contact his parents in Taiwan weren’t working and Cliff, despite being Shen’s employer for two seasons and his closest contact in Australia, had no right to medical information about him.

All medical staff would tell Cliff is that if Shen did wake up, he would likely not be the same person he was before the accident.

Despite his accident, Shen was keen to return to the slopes this season. “He may be doing fewer jumps,” Cliff says. Photo: Supplied.

“The next hour or so was complete panic – the medical people were desperately trying to get in touch with his family in Taiwan. We had no details on file and fellow staff could not access his phone or email. All that could be done was to put a message on his Facebook page and hope it would be seen,” Cliff explains.

Shen was airlifted to Canberra Hospital and the search for his family became more intense.

“The Taiwanese Embassy was on the phone to us stressing the urgent need for contact,” Cliff reflects. “We were trying to help and we were also trying to feed a full house of guests. Luckily a friend in Taiwan spotted the Facebook post and went round to the family home.”

Waking up in a hospital back home in Taiwan a month later was a crazy experience for Shen.

“On the first day, I couldn’t move at all and I couldn’t believe that it was true,” he says. “My father came to Canberra after I had been in a coma for two days and the nurses told me he came straight to my bed, held my hand and said – no worries, we are together now.”

The experience was understandably hard on Shen’s family. “When my mother talks about the accident, she just cries,” he says, something Shen has used as motivation to achieve his goals.

“Since I was a kid, I really liked competition and liked to win anything and especially after the accident, I really didn’t want to lose my life and my career as a chef, so I did the recovery very, very hard in the first year,” Shen says with a laugh. 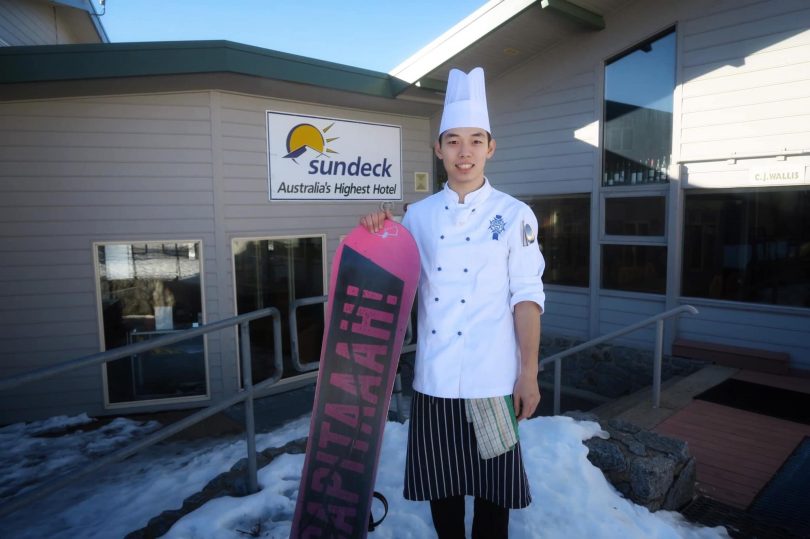 Shen Lo has been able to combine his love of food and snowboarding this season as the chef at The Sundeck Hotel. Photo: Supplied.

When doctors told him after a year he was still too weak to work anywhere, Shen decided to return to Australia and attend Le Cordon Bleu in Sydney, where he graduated in June this year – ready for winter in the Snowy Mountains.

Before life in the kitchen, Shen had been at university studying engineering, but being a chef in Taiwan is a very low-paid job.

“In Taiwan, the money is all for the boss, not for the chef,” Shen explains.

Shen’s loyalty and the skills he gained through his studies have made him an invaluable asset for Cliff and his wife and hotel co-owner Sayaka Mihara, who sponsored him to work for them this ski season at The Sundeck, and this coming summer at the Tathra Hotel. 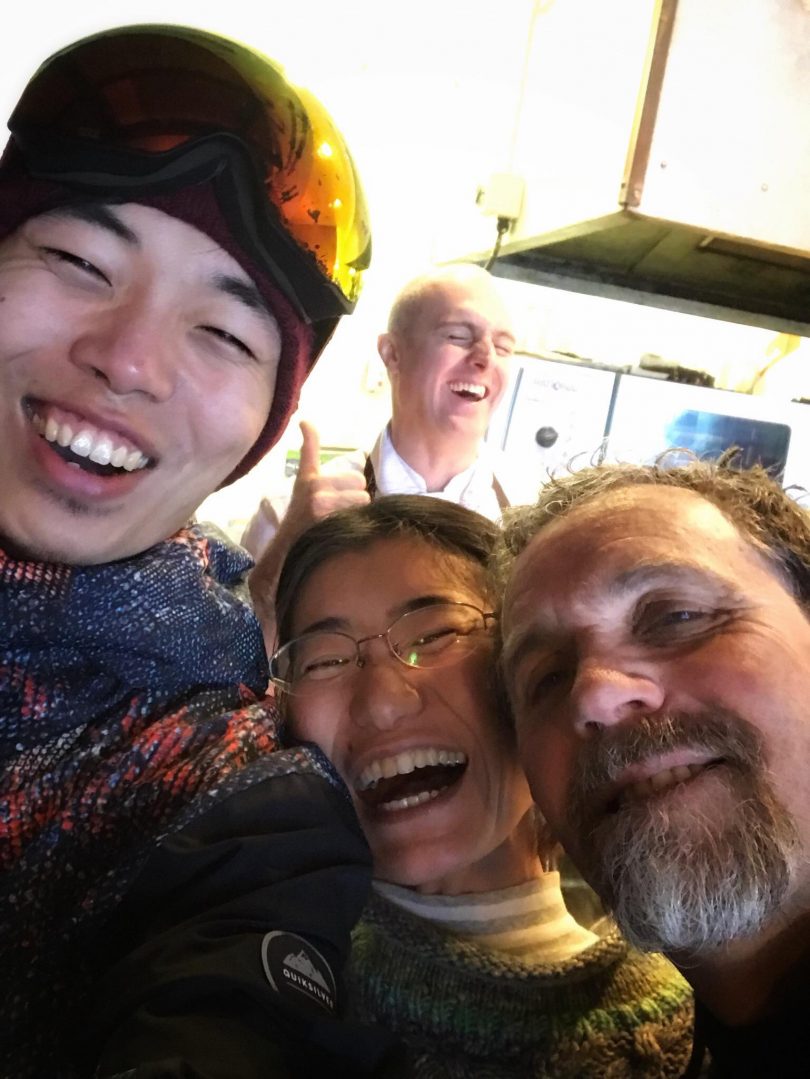 Shen Lo [left] with Sayaka Mihara and Cliff Wallis, who have sponsored him to work permanently in Australia. Photo: Supplied.

“Sundeck was my first interview for a job in Australia in 2015 and it means a lot for me to do the sponsorship here,” Shen says. “Cliff and Sayaka have helped me so much and I want to help them, too.”

Aside from Shen being a qualified chef with a few aches and pains, one other thing has changed since his accident – “We now ask for the emergency contact details of all our staff,” Cliff says drily.

Acton - 39 minutes ago
What about an OH&S assessment of home based work and upgrades of home lighting, heating, furniture and kitchen facilities.... View
Cary Elliot Johnson - 2 hours ago
ACT Gov: "Here is a beanbag. We have a duty of care to your health so please be mindful of sitting upright whilst working fro... View
News 2

@The_RiotACT @The_RiotACT
The ACT Government is continuing to back the full rollout of the ChooseCBR vouchers despite claims from the Opposition the scheme failed to hit the mark with businesses https://t.co/W1eCS3K5Cv (1 hour ago)

@The_RiotACT @The_RiotACT
Cycle to Civic from Molonglo? A plan for bridge connection across the Molonglo River Reserve will shorten your journey https://t.co/ouIExQ6jy0 (4 hours ago)