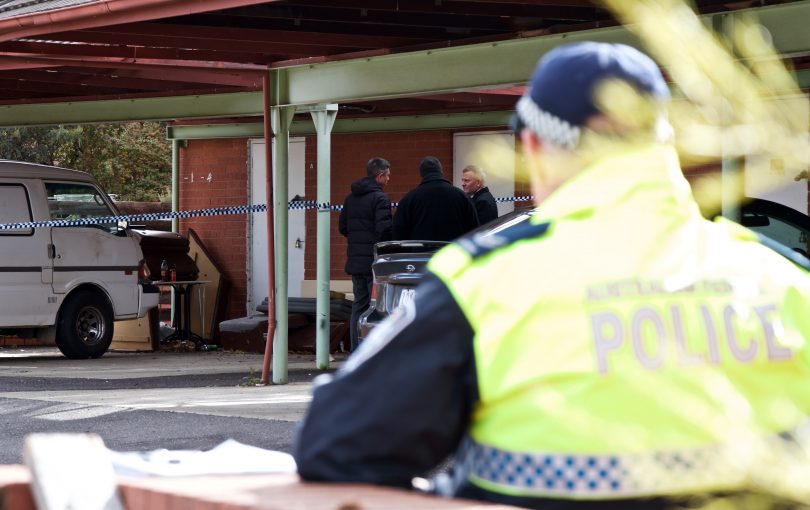 Investigators from ACT Policing at the scene where a 48-year-old man died at Mansfield Place, Phillip. Photo: Michael Weaver.

Updated 12:45 pm 11 June: Members of ACT Policing’s homicide and forensics teams are investigating the death of a 48-year-old man who died from a single gunshot wound shortly after one or more people knocked on the door of the man’s townhouse.

The incident occurred at the end of a cul-de-sac in Mansfield Place in Phillip at about 11:45 pm last night (10 June).

Detective Inspector Marcus Boorman said a woman inside the home at the time of the shooting called ACT Ambulance Service who treated the man at the scene before taking him to hospital where he died a short time later.

“We have located a number of items of evidence that we will be forensically examining and we are also following a number of avenues of enquiry,” Det Insp Boorman said.

Det Insp Boorman would also not be drawn on links to Operation Ironside earlier this week that led to the arrest of 224 offenders on 526 charges in every mainland Australian state following the Australian Federal Police-led operation.

Police have yet to locate the weapon and Det Insp Boorman was unable to say whether the gunshot wound was at close range or the whereabouts of the man inside the home before he was fatally shot.

Anyone with information that could assist police is urged to contact Crime Stoppers on 1800 333 000, or via the Crime Stoppers ACT website. Quote reference 6821216. Information can be provided anonymously.

9:20 am: A person has died following an incident at Phillip late last night, ACT Policing has confirmed.

ACT Policing and the ACT Ambulance Service were called to Mansfield Place in Phillip at about 11:45 pm on Thursday (10 June).

“One person was assessed at the scene before being transported to hospital with life-threatening injuries. The person later died at hospital,” an ACT Policing spokesperson said.

Investigations into the circumstances of the incident are ongoing. Police have cordoned off an area surrounding Mansfield Place.

“Please be aware there is a police presence in the area and there is no threat to public safety. Sections of Mansfield Place remain closed and people are asked to avoid the area,” the police spokesperson said.

Where in Phillip is Mansfield Place ?

TheSilver - 59 minutes ago
There is literally no good evidence that "social distancing" or "wearing masks" can reducing risk. At best you can say we don... View
phydeaux - 2 hours ago
Quite so. To put some rough numbers on it, 2017 was a peak flu season in which near 1200 people died, but the 4-year average... View
chewy14 - 3 hours ago
Can't remember when anyone said anything about compulsory flu booster shots? We are talking about Corona Virus, which is sign... View
Community 1