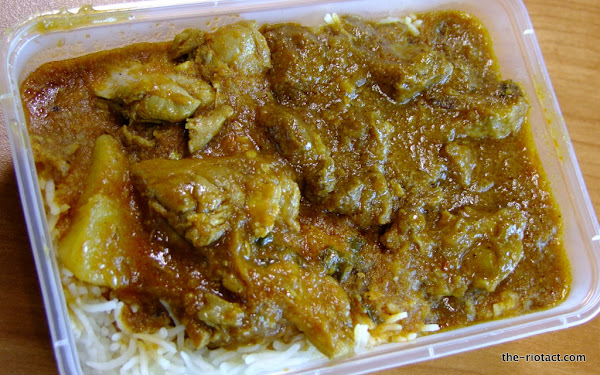 The Burmese Curry Place in Civic is a much loved institution that has trained its customers to queue in elaborate ways so that tasty Burmese Curry can be dispensed at maximum speed.

For a while there was a struggling cafe next door called Pistachio which never seemed to offer anything uniquely different from every other cafe in Civic and eventually expired.

Into that space have moved gentlemen of sub continental appearance and a sign offering two curries for $8.50.

So it’s more expensive than the Burmese curry.

Also once you’ve been inducted into the cult of Burmese curry; know which line to stand in to order, which one to stand in to collect, know the dishes by their numbers, know how to apply Burmese condiments… well we all get a little invested in the joint.

So for the last few weeks I’ve been thinking I should give the curries a go, but haven’t quite managed to make it through the door.

Today however the Burmese curry queue was heading out the door and onto Alinga Street.

So I went into the cafe formerly known as Pistachio.

And was very pleasantly surprised to see a goat curry bubbling away in the bain marie.

The staff are also quite possibly the friendliest of the sub $10 lunch providers around. (They do, however, lack the iron efficiency of the Burmese).

Not having to join a queue 20 deep can make up for a lot of inefficiency though.

I ordered chicken and goat.

I have to say it was actually really good. The goat was pretty much everything I could ask of a goat curry.

The food was spicy without being overwhelming (I could have done with more cowbell personally, but I’m not exactly the mass market), the rice was great, and the portion good.

The signs say they’re halal as well if that’s important to you.

Well worth a try, especially if you like a goat curry.

(For more $10 lunches in Civic check the tag)

t2owe - 2 hours ago
I really don't care about what they say about the Libs. Given the antics of the Barr government, just how much more damage co... View
t2owe - 2 hours ago
How about a change of government. It's way over due,. ACT government is consult in name only, and planning is off the wall.... View
Lifestyle 7