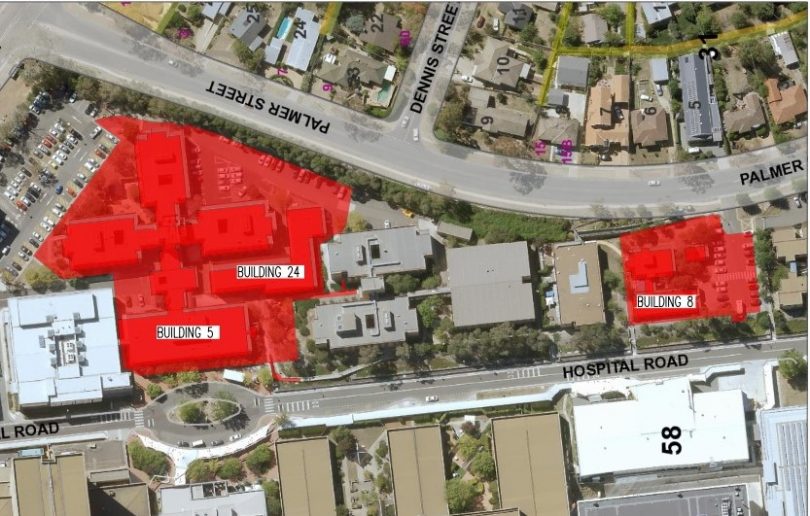 The buildings to be demolished to make way for the SPIRE project. Photo: DA application.

The ACT Government is moving ahead with the $500 million project to expand the Canberra Hospital, lodging demolition plans to clear the way for construction of the Surgical Procedures, Interventional Radiology and Emergency (SPIRE) Centre to future-proof health services on the Garran site.

The plans say existing Building 5 on Hospital Road, and Buildings 8 and 24 on Palmer Street, comprising more than 9,000 squares of floor space, will be demolished, as well as surrounding paved areas.

The demolition will also see a number of trees removed, services disconnected and landscaping of affected areas.

There are no registered trees, rare or endangered species or remnant eucalypts in the demolition area, but there are nine regulated trees, the removal of which will have to be approved by Transport Canberra and the City Services tree unit.

All other trees within the assessment areas can be removed without needing approval.

Twenty-one parking spaces will be temporarily removed as part of the demolition of Building 8 and the car park nearby, but an additional six spaces will be gained further south, adjacent to Building 9, resulting in a net loss of only 15 spaces.

The plans say demolition is not expected to generate any significant traffic during and after the proposed development.

The demolition plans come only days after Garran residents complained about the siting of the new Emergency Department entrance on Palmer Street and potential traffic and safety threats to children riding to and from Garran Primary School opposite the hospital on Gilmore Street.

The residents have launched a petition that also addresses concerns about parking and helicopter noise from the helipad.

The ACT Government and community are now in talks about those concerns but the ACT Health Directorate was not required to consult with the community before lodging the demolition application.

Where will the departments/units currently operating in these buildings go? It doesn't say in the story...

They are relocating to other areas that were made vacant when UCH opened.

Wonder where the tradies will park as there is bugger all there now.

The UC Hospital should have been built in Tuggeranong instead of a few metres down the road from Calvary.

Sounds like it would be better to have kept the original hospital!!!

Start a new over the other side of the hill near the Monaro Highway, fresh field site spread it out as much as you like and make proper access and parking available....not all scrunched in and compressed. Probably cheaper too!

Dave Phillips building 5 also houses the IPTAS accomodation that both pts and their carers use for when they travel to Canberra Hospital for outpatient appointments & treatment.. length of time varies from overnight to weeks at a time... that should be more of a concern for the general public as well as those people from interstate requiring the use of the hospital services & treatment...

When will the main building be replaced 🤔

Built like the old Canberra hospital and unfortunately we know how that went. They were built to last would cost a fortune to tear it down

The government needs to investigate alternative strategies to address the growth needs of the hospital. This should include investigation of land to the west of Yamba Drive currently used for parking and previously for the CIT. A land bridge over Yamba Drive could integrate this land with the hospital.

There is a concern the government’s unstated intention is to expand the hospital by closing Garran primary school. The government should rule this out a as the school serves a strong community purpose and has strong enrolments.

And where will the poor patients go when this knock down rebuild takes place? Why not build another hospital as this on is crowded enough.

Janet Ilchef building a hospital isn’t hard. Staffing it is. There is a world wide shortage of qualified and experienced nurses and midwives.

Belinda Napier true but where will they work or be treated while this demolition is going on?

Janet Ilchef the buildings being demolished are mostly non clinical spaces as far as I’m aware, or are used only for outpatient appointments, so won’t reduce the number of inpatient beds during the construction phase.

Janet Ilchef she is right

The building being demolished is the building that all the bosses are in - it’s an old demountable.

bj_ACT - 32 minutes ago
That’s a really interesting read A nony mous. We deserve to know more research and analysis. Many of the Oaks and Cedars of... View
A Nonny Mouse - 4 hours ago
The Local Government Association of South Australia commissioned an 'Independent Inquiry into Management of Trees on Public L... View
bj_ACT - 6 hours ago
I’d certainly like to see some peer reviewed stats on the tree falls in Canberra. I noticed on radio last week the TCCS exe... View
News 10