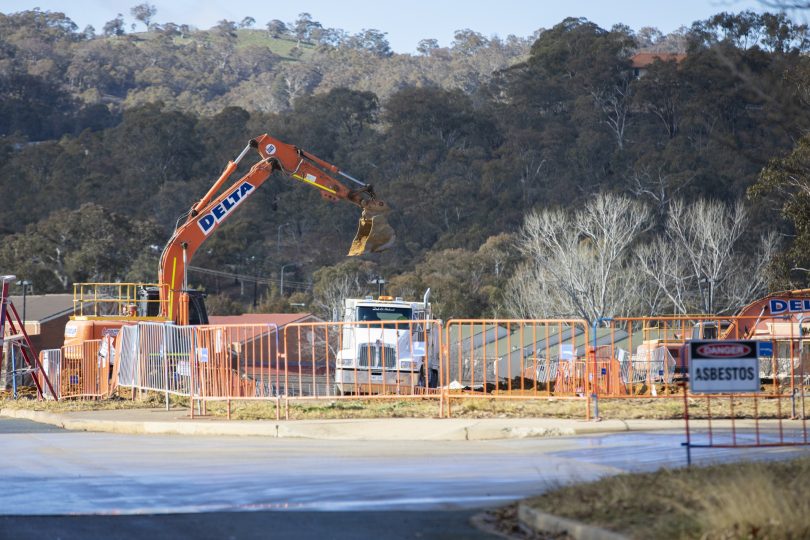 Work is continuing on the site to prepare it for construction. Photo: Michelle Kroll.

Canberra Health Services has lodged plans for a temporary 1100 space staff car park on the site of the former Woden CIT to service the Canberra Hospital while it undergoes major infrastructure works over the next four years.

The secure $3.78 million surface facility will plug parking gaps created by the future upgrade of the Centenary Hospital for Women and Children and the construction of the $500 million SPIRE project.

The site on the corner of Hindmarsh Drive and Ainsworth Street in Phillip (Block 17 Section 1) has now been cleared and contaminated soil around the former buildings’ footings will be removed over the next few months.

The works will include asphalt surfacing, street lighting, and the construction of boom gates at three existing driveways.

The fenced site will also include a single-storey guardhouse and communications and CCTV facilities to ensure the safety of hospital staff, many of whom work at night, and their vehicles.

There will also be a bus shelter as a shuttle bus service will take users to the hospital campus.

Traffic Control Devices will be implemented in Ainsworth Street to deal with the additional traffic flow entering the temporary car park, as well as extra line marking.

The plans propose that two ”poor quality” regulated trees be removed for kerb layout of the car park but trees to be retained on site will be protected and maintained during the works. 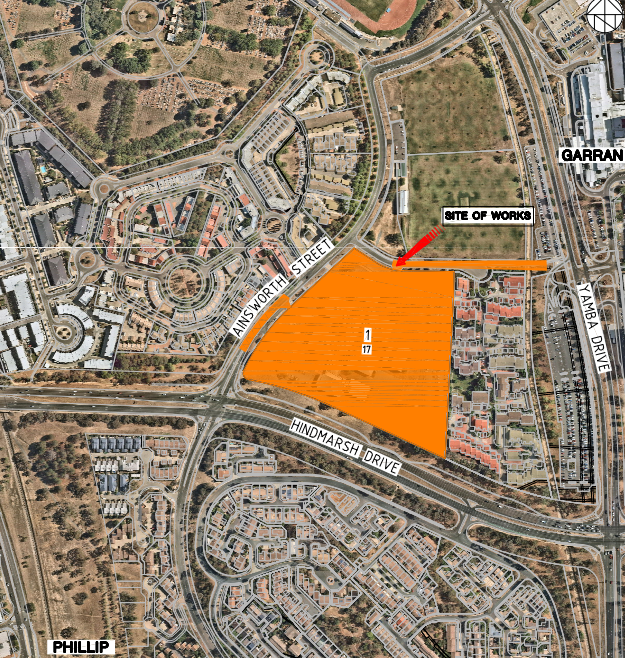 The car park is a short walk or shuttle bus ride to the Canberra Hospital campus. Image: Indesco.

The project is on track to be completed by October 2020.

Woden Valley Community Council had pleaded for the CIT buildings to be repurposed but Health Minister Rachel Stephen-Smith said earlier this year that friable asbestos had been found and demolition had been recommended as the best option.

She said the Government would work with the community to consider options for future use of the site after SPIRE was completed.

The government says the new surface car park’s more than 1100 additional parking spaces will benefit hospital staff, visitors and construction workers while the new emergency, surgical and critical healthcare facility and other projects are being constructed.

It is expected to open before the main SPIRE works start next year. The SPIRE project is due to be completed in 2024.

“We will continue to investigate long-term parking solutions at the Canberra Hospital campus as part of the Master Planning process. Input from hospital staff, consumers and local residents will be an important part of this process,” Ms Stephen-Smith said.

Barry Finch - 43 minutes ago
Absolutely agree. Canberrans and the ACT Government should be able to decide on all issues affecting us, rather than falling... View
jorie1 - 4 hours ago
I support s.122 of the Constitution. You cannot just decide to change the Constitution because you feel like it. The people o... View
Andrew Turnbull - 5 hours ago
Paul Irving ok, now putting your own bigotry towards people of faith how about the actual issue itself. aside View
Lifestyle 33

Michelle Paul - 1 hour ago
They probably have to keep wearing their ring until the show is over.To throw us all off. View
News 73

Julie Macklin - 2 hours ago
Samuel Gordon-Stewart I'll try that next time. Thanks. View
Capital Retro - 4 hours ago
I can see the logic in what you say and thanks but this assumes that the person checking the others in knows who the others a... View
Samuel Gordon-Stewart - 5 hours ago
Julie Macklin With the NSW app, if you don’t have it installed, you can scan the code with your camera and be directed to a... View
Motoring 6

David Tickner - 3 hours ago
Alan Davey, sad but so true mate. So many whingers out there these days, with nothing better to do with their life unfortunat... View
Opinion 5

steve2020 - 5 hours ago
It's cross-cultural and inter-cultural collaboration. No different to many football teams or workplaces, for example. View
Kieran Livingstone - 6 hours ago
“What right do I have to answer such a question when I am steeped in white male privilege?” View
Maya123 - 6 hours ago
“Isn’t this a bit of a oxymoron… ur stating issues of Aboriginal culture while u have a all white band… seems ur just... View
Community 1

Ol L - 6 hours ago
Scary figures for these retrospective energy improvements. All homes September 2019- ‘The cost of the retrofits ranged betw... View
jorie1 - 7 hours ago
Well said @Acton. The price of the property dictates what you get. If you want to rent a 6 star energy efficient modern updat... View
jorie1 - 7 hours ago
I agree that a world view of housing should be to provide shelter first, and most houses in Australia do provide shelter. But... View
Opinion 12

JC - 7 hours ago
You could probably go back to Tuggeranong actually. And the reason is the design and the underlying principle that underpinne... View
News 2

Capital Retro - 8 hours ago
The workers should be in quarantine also. And why they are in a hotel is a mystery - they should be in a tent camp in the bus... View
News 22

Karen Feng - 8 hours ago
yes. current method seems to allow people to suffer till they die. My dad had cancer and he wanted to be euthanized. I was go... View
Opinion 27

Capital Retro - 8 hours ago
As well as being an apologist for the un-needed light rail, JC has also become a consultant for "Fix My Street" which is spon... View
Capital Retro - 8 hours ago
Well, it was pointless to replace one existing and successful mode of transport with another. The same "urban renewal" missio... View
show more show less
*Results are based on activity within last 7 days

@The_RiotACT @The_RiotACT
Dreaming of cocktails on the coast? A refreshed @CorrigansCove Resort in Batemans Bay could be the perfect spot for your next getaway https://t.co/2JGOZd9wkS (2 hours ago)