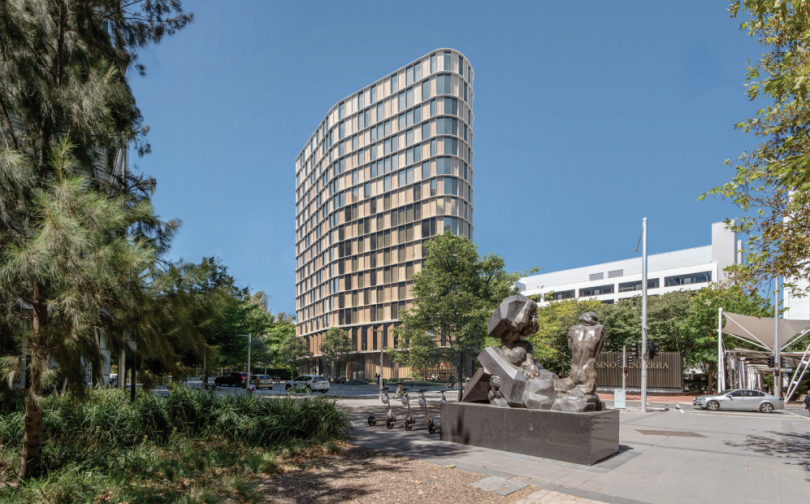 Plans for a 14-storey Holiday Inn Express hotel at the casino end of Civic will be seen as a vote of confidence in the national capital’s economy and tourism credentials after the impacts of the COVID-19 pandemic on the travel and hospitality industry in Australia.

The unveiling of plans by the Salter Brothers group comes after confirmation that Canberra will have its first Meriton hotel, a 16-storey, 207-suite project, in nearby Allara Street.

The Holiday Inn Express project is planned for a car park on Binara Street in front of the Crowne Plaza, and offer midscale accommodation to complement its high-end partner.

It will include 238 hotel guestrooms across 12 accommodation levels, with a lobby, drop-off and loading area at ground level and a guest restaurant, lounge and amenities on Level 1.

But the project will not provide parking on-site, with its single basement housing services and back of house areas.

The proponent expects many hotel guests to arrive by taxi/ride sharing or buses. Other parking needs will be met by Crown Plaza, which has about 220 spaces, and other offsite areas such as those at the National Convention Centre.

The drop-off area will be at the rear of the hotel and adjacent to the existing Crown Plaza porte cochere, accessed via the existing onsite driveway.

Both hotels will operate independently, but together will create a vibrant precinct, according to the pre-DA consultation documents. 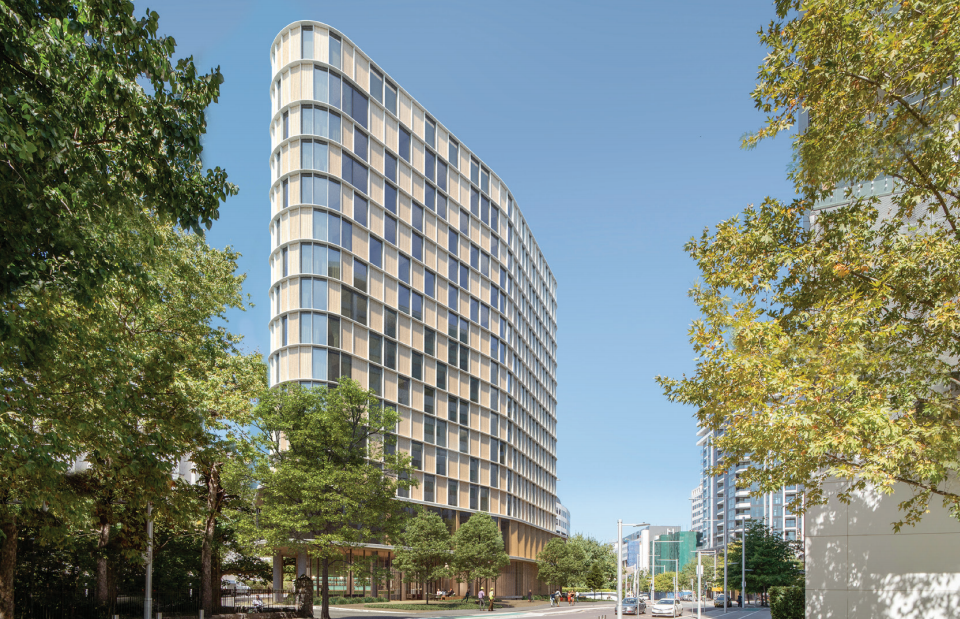 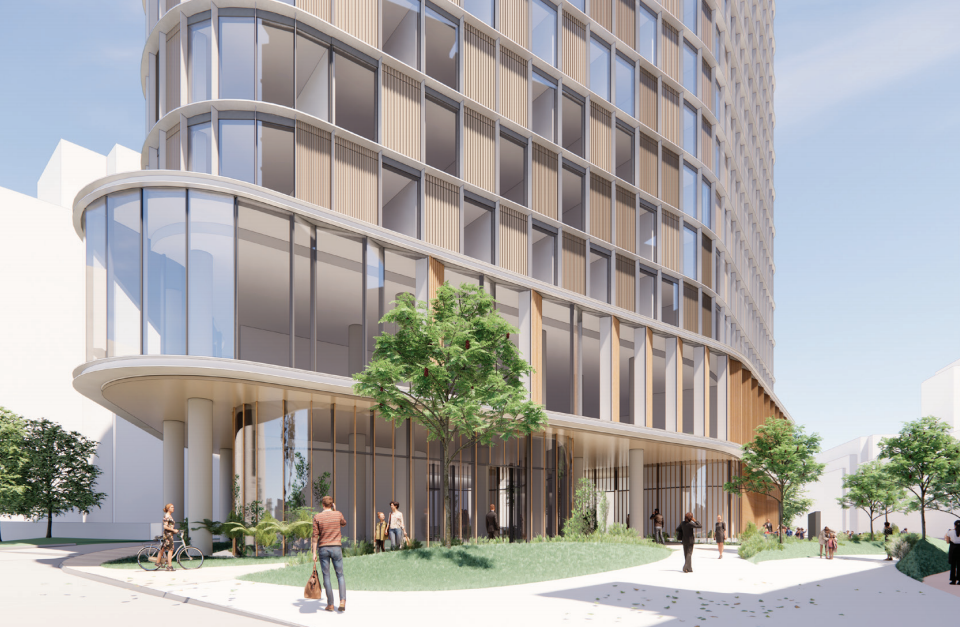 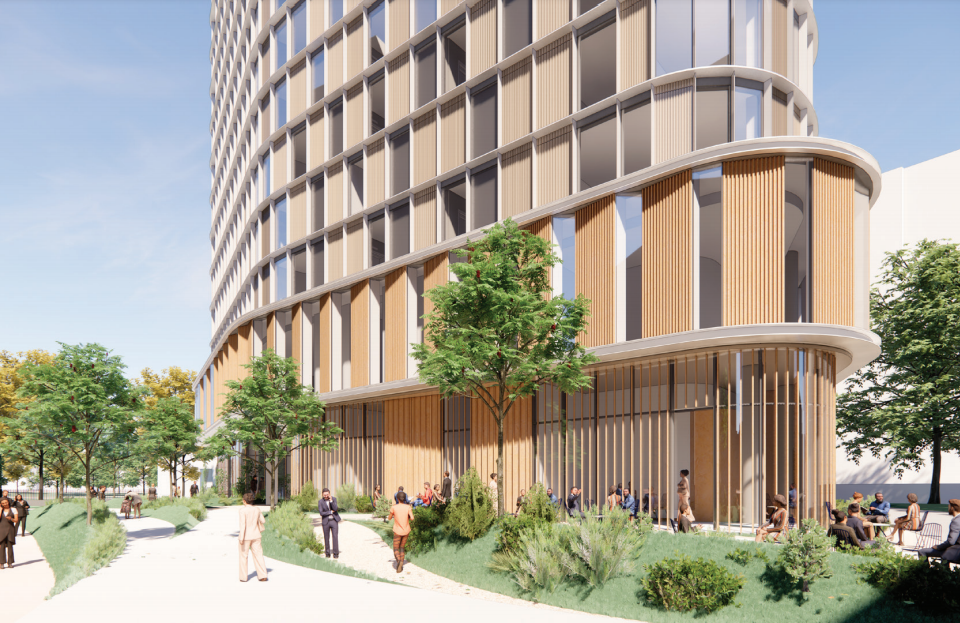 They say the proposal also aims to improve the amenity of the Binara Street precinct, widening the public footpath immediately in front of the hotel and creating a central walkway through the site connecting both hotels.

The proposed pedestrian pathway directly off Binara Street will lead to the central open walkway that directs guests to the lobby and continues to the existing Crown Plaza Hotel entry.

A ground-floor retail tenancy and a café with outdoor seating are also planned.

“The proposed development aims to assist in efforts to attract more visitors to Canberra’s City Centre as the city experiences increased demand from both leisure and business travellers,” the proponent says.

“Its proximity to existing hotels, the Canberra Centre, and entertainment venues such as bars and Casino Canberra make it an ideal location for a new hotel offering.”

The proponent says the project has been designed to respect the environmental values of the adjoining Glebe Park, and verge upgrades will provide better landscaping along Binara Street.

It will also seek to vary the lease to facilitate the development.

A Development Application is expected to be lodged in June 2021, with construction to commence around the end of 2022 and take about 18 months.

READ ALSO The best hotels and resorts on the South Coast

Managing Director of SB&G Hotel Group Paul Salter said in 2018 that the company saw an opportunity to bring a differentiated hotel offering to the Canberra market.

“While the Canberra market has been strong over recent years, the majority of hotel supply that is planned is upscale, with the midscale market remaining under-serviced,” he said.

IHG’s Managing Director – Australia and Japan, Leanne Harwood, said that the hotel would offer fast service in a simple format.

“With faster check-in and breakfast for everyone, Holiday Inn Express gives guests a simple, engaging place to recharge and get a little work done. We think it’s a great fit for Canberra’s savvy traveller,” she said.

The owners of Casino Canberra have been trying for years to redevelop its site and transform the surrounding area into a leisure and nightlife precinct but has been unable to reach a deal with the ACT Government.

The plans for the Meriton and now Holiday Inn Express projects will extend the city’s re-development to the south, after much focus on the northern and central areas.

An information drop-in session will be held between 5:30 pm and 7:00 pm on 6 May at the Crowne Plaza Hotel.

Honestly, there’s no point in writing in to disagree. The government will have already made up it’s mind to approve this and have been proven time and again they don’t take into account the opinions of the people who didn’t vote them in or even those who did.

One “The Government” generally don’t get involved in approvals unless there is a good reason to. The vast majority of projects are approved by the public servants following the planning rules.

Secondly what exactly is your objection to this dfvelopment?

Maybe they will supply e-scooters instead, ha ha.

No it won’t, but that won’t stop it being built.

I have stayed in several Holiday Inn Express hotels in the UK. They were good value, and cheaper than many hotels and motels in Australia. Those in the country (on M roads usually) had parking. I wouldn’t have used them if they didn’t, as I stayed in each several nights, and used them as a base to explore the area. I also stayed in one at Heathrow. I’m not sure if that had car parking, as I was either flying in or flying out, and didn’t have a car then.

With no parking for the one in Canberra, the market must be mainly for fly in, fly out customers. Probably business people, and not aiming at tourists so much, who often have a car.

Who can afford to fly in and out of Canberra?

Why no parking. It would be a 2nd income stream. A question for the ACT tourism board: were do most of the tourist come from?

Pam a home is not designed to be a hotel, but we still use them as one (b&b). The hotel can rent out the parking spots to office workers.

Bit of a shame that nice camelia hedge will be removed

Robert Azzopardi why not participate

Good luck with the no provision for car parking plan.

I would think the developer who is stumping up the money to build this would have done the analysis of their target market and determined that they don’t need car parking.