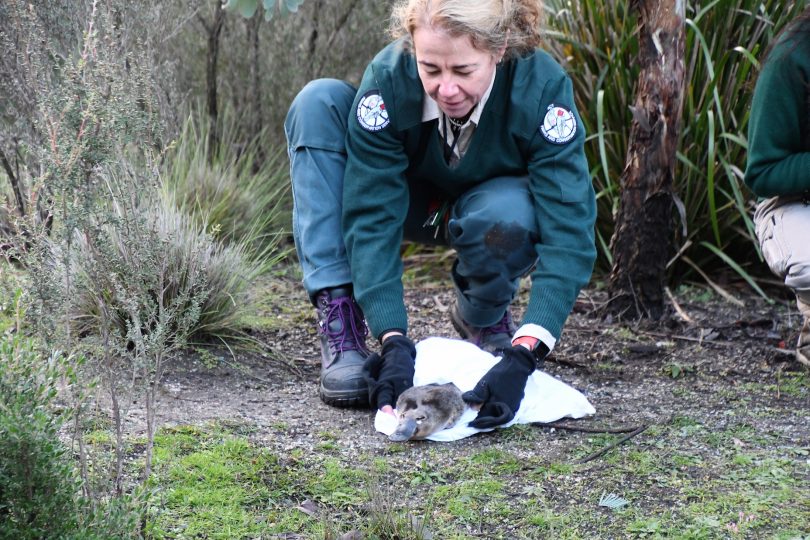 Rescue team member Dr Sarah May from ACT Parks and Conservation releasing one of the platypus. Photos: Supplied.

Three platypuses have returned to their natural home at Tidbinbilla Nature Reserve after a ‘holiday’ at Taronga Zoo in Sydney.

Seven of the egg-laying mammals had to be rescued from an almost dry pond during the summer’s bushfire season after rangers feared their home would be completely dry within weeks.

The remaining platypuses will be released in the coming weeks.

Now there has been sufficient rainfall in the area, the rescue effort has allowed the animals to be returned to their sanctuary which is designed to keep out predators. 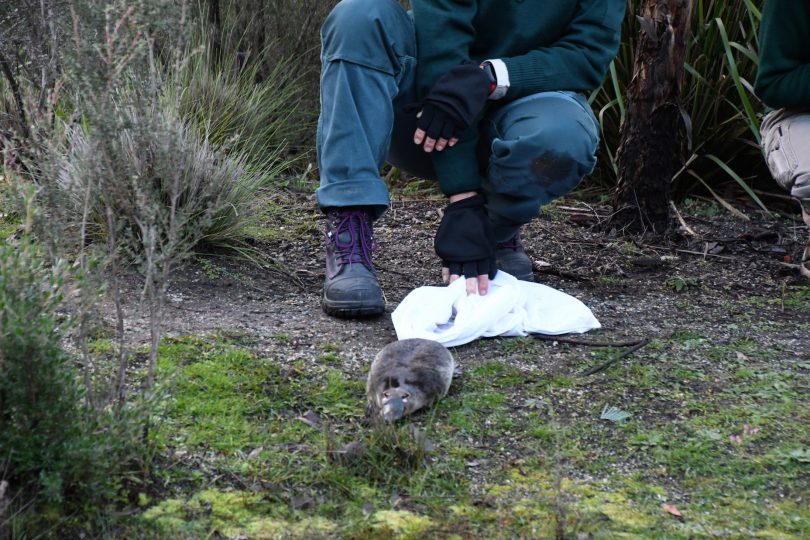 Taronga’s Manager of Conservation and Recovery Programs Andrew Elphinstone said there was real anxiety about whether the platypuses would have perished in the worsening conditions.

“With an ever-decreasing water body comes the reduction in resources, including food. It was feared there were not enough prey items to support the platypus population,” he said.

The rescue mission also helped kick off a new study partnership examining the risks of extinction for the first time.

The study estimated that under current climate conditions, and due to land clearing and habitat fragmentation by dams, platypus numbers had almost halved since European colonisation, leading to the extinction of local populations across about 40 per cent of the species’ range.

ACT Minister for Environment and Heritage Mick Gentleman said Tidbinbilla Nature Reserve, Taronga Zoo and UNSW had teamed up on a research project to better understand the movements and behaviours of these elusive creatures.

“Recent rainfall has since filled the waterways and ponds at the Reserve and the platypus can now return to thrive in their natural environment.”

Mr Gentleman said the platypus were tagged with tracking devices during their stay at Taronga Zoo.

“It’s great to see Tidbinbilla, Taronga and UNSW turning this summer’s devastating weather events into a significant opportunity for collaboration and research.

“I thank our partners for working with Tidbinbilla’s wildlife officers and caring for these iconic Australian animals over summer while the nature reserve experienced extended dry conditions and the threat from fire.” 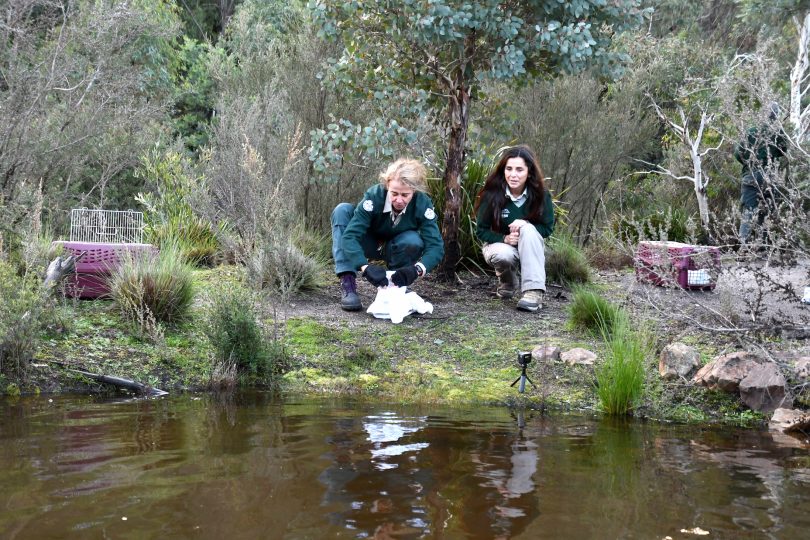 The platypus were released at Tidbinbilla Nature Reserve by ACT Parks and Conservation staff.

“The tracking project will provide never before studied insights into the habitat use, behaviour, and interactions of platypuses over an extensive time period [1.5 years],” Dr Bino said.

“Findings are anticipated to improve understanding of platypus habitat requirements not only specifically for Tidbinbilla Nature Reserve but also for the management of wild populations of platypus.”

Taronga Wildlife Conservation Officer Dr Phoebe Meagher said they were thrilled to be able to release the first three animals back to their home within the Reserve.

“Increasingly, Taronga is being called upon to assist in these kinds of rescue missions because of our extensive experience in wild animal care and management and our commitment to conserving wildlife,” Dr Meagher said.

“During their stay at Taronga, our platypus keepers went above and beyond to keep these animals healthy and to ensure they kept their natural behaviours.

“They achieved this by limiting their contact with the Tidbinbilla platypus, supplying live food for active foraging and keeping them separate from Taronga’s own animals,” Dr Meagher said. 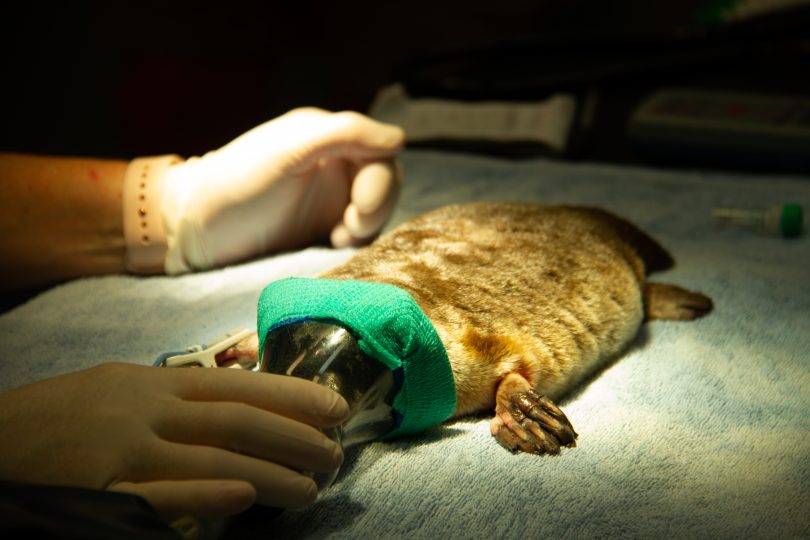 One of the platypuses undergoes health check at Taronga Wildlife Hospital.

Mr Gentleman said Tidbinbilla and other parks throughout the Canberra region were continuing to recover from a very challenging summer.

“Tidbinbilla Nature Reserve remains closed for public safety in response to COVID-19 and we are also working to repair damage from bushfire and floods. We are looking forward to being able to welcome visitors back to the reserve to see the platypus later in the year,” he said.

Further information on ACT’s park and reserve closures, including Tidbinbilla Nature Reserve, is on the ACT Government’s environment website.

Margaret Stamatis-Everett - 15 minutes ago
Catherine Denice , did Uncle Jimmy see this? View
Sue Skinner - 2 hours ago
I never knew that this existed! Susan English have you seen it? View
Katie Erskine - 11 hours ago
So glad we had breakfast there with you Jennifer Lindley . A great piece of Canberra.... View
Breaking 2

chewy14 - 28 minutes ago
Because they were keeping supply mainly centralised early on because of the efficiencies of doing so with a limited supply. N... View
Community 1

chewy14 - 32 minutes ago
So any NIMBY issue is just going to get an uncritical article now where they can claim whatever they want? I heard that the q... View
Opinion 13

Joshua Grech - 38 minutes ago
ACT gov partners with Virgin Australia to diversify transport as aircraft movements between sydney and Canberra are an easy e... View
Jack Horne - 10 hours ago
Charlie Karmenu Flask must have been with Hellstra in the aluminium lined carriages and metallic glazing that stops 5g emissi... View
News 9

Acton - 1 hour ago
The UC says international students continue to study online and are doing well. So there is no need to risk the health of Aus... View
Michael Cameron - 3 hours ago
Shawn Mulgrue 1st..YES! View
Mandy Savery - 11 hours ago
How about delivering on campus for the students that are here? Or even delivering lectures live online instead of videos from... View
Lifestyle 8

Tom Porter - 11 hours ago
Nick Savino can you counter the report. View
What's On 2

The head of an electronics store has been sentenced for stealing almost $60,000 from his employer. The agreed facts in...
Property 16