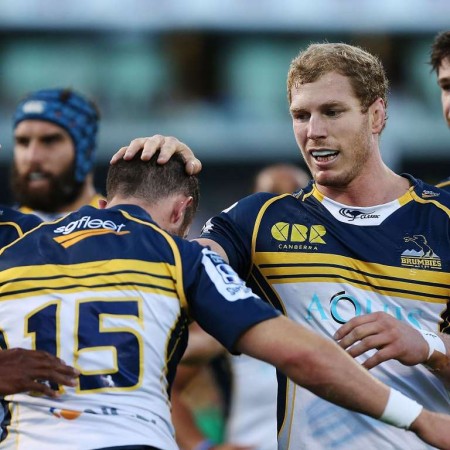 McKellar believes that the 29-year-old could start and perform well straight up. Photo: File photo.

Brumbies coach Dan McKellar expects David Pocock to make his long-awaited return to Super Rugby against the Waratahs in the Brumbies next home match on March 31st.

The openside flanker has been given the all clear by the medical staff and is almost certain to take on the Waratahs at GIO Stadium after the side’s bye this weekend.

Pocock had surgery in January to repair his damaged meniscus which delayed his comeback after taking a year off from the game last year.

McKellar believes that the 29-year-old could start and perform well since “he’s been around a long time now and he is in peak physical condition”.

“He just has to get through a full week of training next week and he’ll be available for selection most likely. He’s done some progressions which are all controlled so a little bit more chaos in terms of what he’s doing in and around that collision area and then we’ll make a call there,” McKellar said.

“To have him in the dressing shed and ready to play potentially will be a big lift and I think that’s something we spoke about when he first got the injury. Whilst it was disappointing, the benefits are four weeks in on the back of some travel, and we get a boost for bringing David back into the team.”

After returning to the winner’s circle against the Sharks to stay within touching distance of the leading pack in the Australian conference, the Brumbies are prepared for a match that could determine whether they play finals this year.

There could also be a battle to see whether Tom Cusack or Pocock will take the field in the number seven jersey against the Tahs with McKellar prepared to look at both options.

“Both options are on. Tommy Cusack has been playing well, so do you bring David off the bench? That is something that I will consider over the next couple of days.”

Isi Naisarani said that Pocock’s return would be a major boost to the home side.

“Pocock is a world-class player, it’s going to be a big boost for the team and the forwards as well when he returns and I can’t wait to play alongside him,” Naisarani said.

How many players in the Brumbies are actually originally from Canberra?