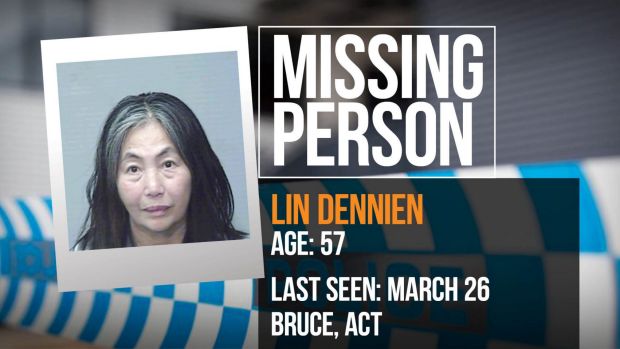 The police have begun an all out search and rescue for missing person Lin Dennien.

Last seen on Sunday 26 March near Calvary Hospital, Ms Dennien is 5’3” and Asian in appearance. She was wearing a brown jumper, black pants and a blue scarf.

The police are calling for anyone with information on Ms Dennien’s whereabouts to step forward. Ms Dennien’s family, who live in Sydney, are being contacted for further information.

The search and rescue operation has mobilised a significant number of police officers, who are working with the State Emergency Services and ACT Parks and Forrest to search the dense surrounding bushland and waterways.

The Belconnen area, in which Ms Dennien was last seen, has a large number of footpaths and water bodies.

“We haven’t been able to contact Lin’s family at this stage. If they are listening we’d ask that they come forward,” said Sergeant Greg O’Ryan, Chief of the Belconnen Police Station.

“In matters like this we do rely on information from the public to assist us in identifying her possible location.

“We have grave concerns for her welfare. We are aware that she has some medical conditions and that intensifies our concerns

“In these sorts of cases, the longer the case goes on the worse the outcomes might be.”

Capital Retro - 32 minutes ago
There are personal liability insurance issues too. Lawnmowers have a habit of hurling stones and these break windows, damage... View
Community 45

Kylie Gordon-wilkins - 34 minutes ago
Work with Ngunnawal elders and community to create places that acknowledge the owners of the land that has changed so much. W... View
Majella Kesby - 12 hours ago
Well they could deal with the African Lovegrass that's overtaking the reserve area behind me before it's completely overrun. View
Tim Gardner - 15 hours ago
Stephen Budge thank god for that..my parents opened up shops in the Tuggeranong valley before there were houses to the south,... View
Community 3

Winkie Wee - 2 hours ago
I think it would be appropriate to have registration to vote for the 16/17 year olds voluntary. If they want to vote, they ca... View
kenbehrens - 15 hours ago
The argument that some 16-17 year olds work and pay tax, therefore all 16-17 years should be able to vote, is ridiculous. The... View
Business 1

Amy Wald - 14 hours ago
Shay McAuley time to upgrade to the newer version of yours. View
Public Sector 4

HiddenDragon - 14 hours ago
Some time in the next 12-18 months, we can look forward to seeing the first of the inevitable articles about how this latest... View
kenbehrens - 16 hours ago
Ongoing issues with Covid probably justify lower density work environments, however, from a management perspective I can see... View
Rob - 16 hours ago
Any small businessperson must be ruing the day they voted for this lot: no territory public servants buying goods at lunchtim... View
News 15

slovenia - 15 hours ago
Yes an explanation is need to the community as to why the pool is closed this summer. And more importantly is the Government... View
Public Sector 3

tfx1 - 18 hours ago
The survey/census could have been more appropriately designed by asking users of government services as to how government bur... View
show more show less
*Results are based on activity within last 7 days

The number of people affected by a possible food poisoning outbreak has risen to 190, making it the largest ever...
Public Sector 4

The days of nine to five, five days a week at the office are over for ACT Government public servants...
Courts & Crime 1

@the_riotact @The_RiotACT
RT @thecanberrapage: Take two for test cricket in #Canberra? The ACT Government has put its hat in the ring to host the Fifth #Ashes Test a… (23 minutes ago)

@the_riotact @The_RiotACT
. @ACTPolicing has released its annual report. The mixed results have lead the #police association to call for more officers https://t.co/YFLit07J4f (54 minutes ago)