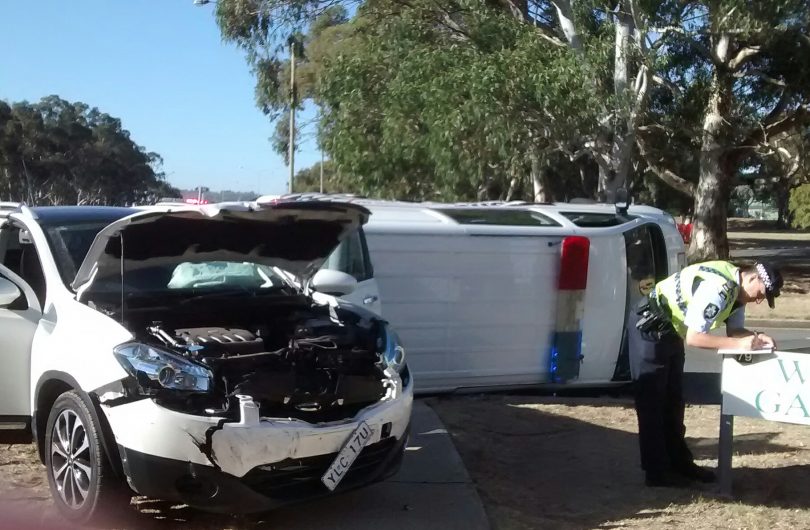 The scene of the accident in Lyons this morning when a police van rolled after colliding with a small sedan. Photos: Ian Bushnell.

Two police officers were injured when their van rolled after colliding with a small Nissan sedan on Melrose Drive in Lyons about 8 am this morning.

ACT Fire & Rescue, ACT Ambulance Service and police responded to the crash, with police closing two lanes which caused traffic to back up in Melrose Drive and Hindmarsh Drive.

The woman driver of the sedan, which suffered minor damage to its front, was shaken but unhurt. 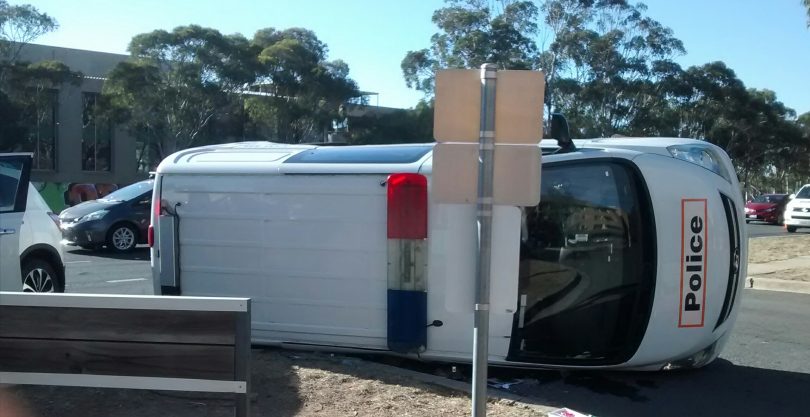 The two officers were taken to Canberra Hospital with minor injuries, according to ESA media.

It is believed the police van’s lights were flashing at the time of the collision.

An ACT Policing spokesperson said the ACT Policing Collision Investigation and Reconstruction Team attended the scene and was investigating the circumstances of the collision.

The spokesperson did not say whether the van was involved in a pursuit or responding to a call.

No further details were provided.

The spokesperson said if anyone witnessed the collision and had not yet spoken to police, they are urged to contact CrimeStoppers on 1800 333 000 or via the website.

The accident was one of several that caused traffic chaos on the south side this morning with the Tuggeranong Parkway and the Cotter Road brought to a standstill in peak hour.

Cheryl Thuillier - 5 hours ago
Garbos don't deal with life threatening decisions daily. View
Lee McDowall - 1 day ago
Nurses should be paid so much more. Garbos think they have a tough job, swap for a day then ask for 12% over 3 years. Nurses... View
Roberta Lynne Anning - 1 day ago
Give them the same pay that the garbos get, and give the garbos the same pay that the nurses get. They just might shut the he... View
Food & Wine 9

Cilla Ong - 9 hours ago
Liu Rui that’s a VERY broad assumption. Would you stand by this assumption and be confident enough to attend one of these h... View
Opinion 42

Cary Elliot Johnson - 13 hours ago
Jennifer White actually just touches on the issue and is the tip of the iceberg that the greater public should know about how... View
Cary Elliot Johnson - 13 hours ago
Jenni Zimoch and allied health workers currently on $30/hr, but according to Jennifer, its just a rubbish issue as is the art... View
David Brown - 16 hours ago
Jo Hann I agree and I think the government should be demanding a rebate. They contracted to provide a service. They have not... View
News 6

Maya123 - 15 hours ago
About time this happened. Well done. View
chewy14 - 16 hours ago
The ACT government once again focusing on the big issues. Well done, not like there are more important things to be done.... View
ssek - 17 hours ago
"Inspectors will have the right of entry to businesses" So, warrantless searches? "Penalties of up to 50 penalty units" Makin... View
Motoring 3

@The_RiotACT @The_RiotACT
Keen to get festive on Christmas Eve with a great night out? We’ve rounded up some top local spots to consider https://t.co/P5iUGeuET0 (6 hours ago)