1. Vehicles and people of interest:

ACT Policing has recovered a substantial amount of stolen property after searching a vehicle and subsequently executing a search warrant on a Waramanga residence over the weekend.

The property, including two motorcycles, jewelry, electrical items, alcohol and an Order of Australia medal, was allegedly stolen during burglaries at a number of Yass properties on Friday (2 October) as well as numerous recent ACT burglaries.

General Duties members from Woden Police Station identified a vehicle of interest at Woden Plaza just before 6.00pm on Saturday (3 October) after earlier receiving information from NSW Police. Police searched the vehicle, which was being used by three people of interest, locating a number of stolen items.

A search warrant was then executed on the alleged offenders’ residence with assistance from the Territory Investigations Group, leading to the location of the stolen motorcycles and further stolen items.

Investigations are continuing however police anticipate that the three alleged offenders, two aged 19 and one aged 17, will be charged with a number of property related offences.

ACT Policing is seeking witnesses after a female was assaulted whilst putting groceries in to her vehicle in Greenway on Saturday afternoon (3 October).

The 20-year-old victim was putting her shopping in the back of her car in the Home World car park about 3.45pm when she was pushed from behind by a male, who then made a verbal threat.

The woman managed to kick the offender a number of times, causing him to flee, before she drove off. She was not injured during the incident.

The offender is described as about 170cm tall, with a medium build and wearing blue pants, a pair of black and white checkered Dunlop Volley shoes and a black long sleeve hooded top with a white skeleton print on the chest. He was wearing the hood over his face, with mesh material covering his eyes.

Anyone who may know this person or who witnessed the incident is encouraged to contact Crime Stoppers.

Two men are expected to face the ACT Magistrates Court this afternoon after the alleged sexual assault of a 17-year-old female in Lyneham last night (October 7).

Two men were arrested after police were called to a party in the suburb about 1.30am this morning (October 8).

The men, aged 19 and 20, will each be charged with two counts of sexual intercourse without consent. 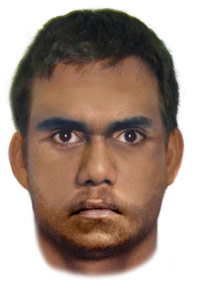 ACT Policing has released a face-fit image of a second offender involved in the serious assault of a 24-year-old man near the Maram nightclub in Gartside St, Wanniassa in the early hours of Saturday September 26.

Police were called to the location around 2.00am after receiving reports of two separate assaults near the nightclub. One victim required hospitalisation for head injuries.

Anyone who recognises the man in the image is urged to contact Crime Stoppers.

@The_RiotACT @The_RiotACT
Police have released photos of three young men involved in a dangerous vehicle burnout recently, and are calling for witnesses https://t.co/aHs03hxBN1 (33 minutes ago)

@The_RiotACT @The_RiotACT
Thinking of buying or renovating: A blindsided Andrew Barr has taken aim at the one-size-fits all approach of the Federal Government's stimulus package for the housing sector, warning it is too generous and may jack up house prices https://t.co/XgVdOjnX0o (1 hour ago)

@The_RiotACT @The_RiotACT
New stamp duty concessions apply in the ACT from today. It means blocks, apartments and townhouses under $500,000 are stamp duty-free until 30 June 2021. It's the latest ACT Government measure to get the economy moving post-COVID-19 https://t.co/CWAyo2cnZJ (2 hours ago)