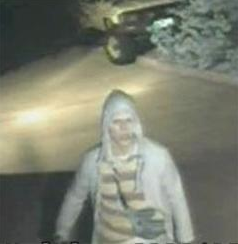 ACT Policing is investigating two suspected arson attacks and property damage at residences in Giralang and Macgregor in the early hours of Sunday morning, May 10, 2009.

Police attended the Giralang residence around 2.55am where the 27-year-old male complainant said that he had been woken by the sound of breaking glass and soon afterward saw flames coming from his car in the driveway.

A short time later, police were notified that a 4WD vehicle also appeared to have been the subject of an arson attack in the driveway of a residence in Macgregor. The complainant’s 51-year-old mother resides at the Macgregor location. Four windows at the Macgregor residence had also been broken.

No-one was injured in either incident.

Police are seeking the assistance of the public in identifying three suspects pictured on CCTV camera footage at the Macgregor residence. Two males were seen pouring what is suspected to be accelerant on the 4WD vehicle.

One of the principal suspects was a male shown wearing a grey hooded top, grey track pants and a horizontally striped red and white (or yellow) top underneath. He was carrying what appeared to be a golf club.

Police are appealing for any witnesses who may have seen suspicious persons or activity such as that described in the Giralang or Macgregor suburbs during the early hours of Sunday morning (May 10) to contact Crime Stoppers.

What about the cops outside Wannaissa High yesterday, guns drawn etc?

I know a few people who have CCTV set up simply because they like playing around with the technology,

They must’ve pissed someone off big time.

2 cars of relatives just happen to be torched on the same night, one house happens to have CCTV set up. I think they were expecting something to happen, and probably know who did it or organised it.

Isn’t that Peter Garrett in that photo????

How do you sleep when your cars are burning???

I know a few people who have CCTV set up simply because they like playing around with the technology, and it is pretty cheap these days. Plus, with broad band you can log in and view what’s been going on from anywhere in the world…

Perhaps the arsonist had found the location of two cars which had cut him up or tailgated and he was getting some payback.

Attacked his home, and his mothers…who did he p*ss off?

Hopefully if this continues they’ll build up a taskforce like they did with the stupid kids on the Southside, it worked well considering they ended up catching the main culprit.

It appears that the rotten little vandal has just noticed the camera, too. I hope they get these kids and that they actually suffer punishment. Everyone pays for this… insurance premiums for that district go up.

You’d have to suspect that the ‘complainant’ probably has a fair idea who was responsible if they were targeting him and his family.

I’m pretty sure they didn’t set it up specifically for vandals. Alot of homes now have back to base security. In fact, I think I have it in my home (I’m renting, came with it), but as there’s usually someone home (housemate works from home), I haven’t bothered to switch it on.

Interesting that the second house attacked had CCTV setup, presumably such an attack was not unexpected.

David Riddell - 7 minutes ago
Can't imagine the waste would be transferred from Mugga as double handling makes no commerical sense. Crs could compete throu... View
Business 18

Rebecca Hosking - 11 minutes ago
Jane Larkin Naomi Feuerherdt Kim Beaumont This is a bit sad 😥 Remember our team photos on the massive reams of paper 😊... View
Acton - 9 hours ago
A local paper that has a rabidly biased weekly column from a once amusing but now worn out journalist who intentionally and r... View
Tom Adam - 19 hours ago
*Riot-Act Rubs Hands *Canberra cries at the loss of the last printed journalism available as all other magazines and newslett... View
News 6

Vindalu - 6 hours ago
I doubt very much whether he is homeless... View
News 14

Sandra Wormald - 8 hours ago
Oh, so that is where the money from the tax payers went, which was meant for bush fire and flood relief ..... View
News 3

George Watling - 20 hours ago
Will Andrew Barr's relentless war with nature never stop. 40,000 trees have been cut down and dozens of our green spaces have... View
News 44

Maria Greene - 21 hours ago
Frank Valzano yeah but how would Brendan or pollies benefit? View
Lifestyle 2

@The_RiotACT @The_RiotACT
As gyms closed around the country during shut down, Canberrans downloaded apps and met in parks, to try to keep their regular fitness routines. But it wasn't just the exercise that everyone was missing https://t.co/603kPx0Cd7 (1 hour ago)

@The_RiotACT @The_RiotACT
Googong has unveiled a new seven-metre high sculpture at the township's entrance. It's designed to welcome visitors to the booming area and celebrate the region's ecology and geology https://t.co/AWpPLqKNnk (2 hours ago)