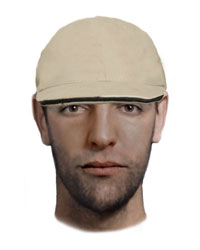 1. It was easier when they could just buy the Sudafed:

ACT Policing has released a facefit of the offender involved in the armed robbery at the Brindabella Pharmacy in Garran on Sunday (May 17).

The male offender entered the pharmacy around 10.40am and threatened staff with a knife before fleeing with a quantity of cash and drugs.

The offender fled in the direction of Palmer Street in a stolen white Ford station wagon with NSW registration plates, which police are yet to recover.

The offender is described as Caucasian, of slim build, aged in his mid-20s, about 5’8” to 5’9” (173 – 175cm) tall, with black hair, unshaven, wearing a dirty white cap, an off-white coloured jacket and black baggy trousers.

Police are appealing for any witnesses who may have seen a person matching this image or may have seen any suspicious activity in the area of the offence to contact Crime Stoppers.

I always wonder what a facefit of me would look like…

Does anyone else get a sense of dread everytime they see a facefit? I am always so worried I will know the person or a loved one will look a little bit too much like them…

consumeradvocatecanberra - 8 hours ago
Most folk don't get it. Canberrans love their cars and have done so for 30 years. It's quick and convenient. But, imagine car... View
Lucy Jane - 8 hours ago
4 day week for everyone but everyone gets a different day off. Will help immensely with traffic congestion and has been trial... View
Ronnie Adams - 13 hours ago
Helicopter 🚁 View
Community 15