1. Foreshore gets a tick:

The Foreshore Summer Music Festival wrapped up late yesterday (Saturday, 27 November), with police praising the overall good behaviour of those that attended.

ACT Policing was responsible for patrolling the outer perimeter of the venue which was sold out. Approximately 16,000 people attended the concert, held on the lawns off King Edward Terrace, Parkes.

A man with injuries was taken into police custody and conveyed to hospital, where he is recovering.

“With the introduction of new liquor licensing laws on December 1, it is great to see the vast majority of people conducted themselves responsibly at this high profile event,” Sergeant Knight said.

ACT Policing last night located two people who had been missing in Namadgi National Park for 36 hours over the weekend.

The 13-year-old boy and his 40-year-old step-father from Ngunnawal were located by police yesterday (Sunday November 28) around 7.15pm after a light aircraft utilising thermal imaging was used. Around 7.55pm the pair were winched to safety by the Snowy Hydro SouthCare helicopter.

The pair had left to hike through Namadgi around the Corin Dam and Bendora Dam area on Saturday morning around 7.30am and were expected to meet up with family members at 1pm yesterday (Sunday). However, deteriorating weather conditions overnight caused concern among the family members and when the pair failed to make the 1pm meeting at Bendora Dam the alarm was raised and a search commenced.

ACT Parks and Conservation Rangers along with members from ACT Policing Specialist Response and Security (SRS) conducted a search of the area using the detailed trip plan left with family members. Unfortunately due to heavy vegetation, poor weather conditions and the rising river level police suspect the pair would not have been able to complete their trek in the proposed time frame.

The pair were found cold and wet but well and have now returned home. 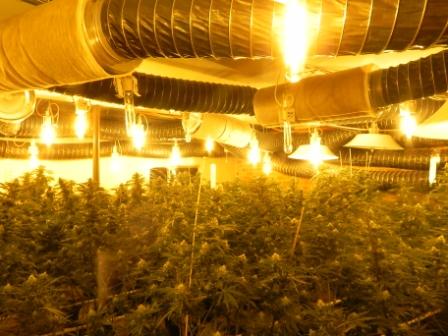 ACT Policing has seized 259 cannabis plants, including 104 mature plants, from a home in Zelman Place in Melba with a potential street value of $5 million. It is the ACT’s largest seizure of cannabis from indoor cultivation.

Acting on information received, ACTPOL’s Criminal Investigations executed a Drugs of Dependence warrant on the residence around 11.45pm on Saturday.

An extensive and sophisticated hydroponics set-up with an automatic watering and ducting system was found inside the house. Most of the plants were located within the triple garage. Some of the plants were as high as 1.5 metres and were ready to be harvested.

The electrical system of the house had been highly modified, with the meter box bypassed and about 80 transformers installed to power the growing lamps and fans inside the premises.

A large team of police were called in to remove the plants overnight and progressively transport the equipment to safe storage.

No people were found inside the house however, police have seized a number of items as evidence and investigations are ongoing. Neighbours have told police that the house appeared to be unoccupied.

Anyone who may have any information about the activity at the Zelman Place premises, any persons seen at the premises, or any vehicles seen arriving or leaving the residence, are urged to contact Crime Stoppers on 1800 333 000, or via the Crime Stoppers website on www.act.crimestoppers.com.au.

BUT, if cannabis were legal, this kind of grow house would still be illegal, so would therefore still be wasting police resources.

“A man with injuries was taken into police custody and conveyed to hospital, where he is recovering.”

A little understated I think, brain hemorrhage and still in an induced coma would be more accurate.

To use the street value then you would expect that to be dried.

Marketing campaign, fraud or just exaggeration?
Can you trust the police to work with numbers?
Is 8 pounds a plant realistic?
Did they test the product before picking up the calculator?

8 pounds per plant would be pretty crappy gear indeed. Shame, it looked like a nice set up albeit a few too many plants.

I suppose saying that it is personal wont get very far.

Unless you are just a nutbag who has to post a one line comment on every thread late at night after a couple of sherrys too many.

To use the street value then you would expect that to be dried.

Marketing campaign, fraud or just exaggeration?
Can you trust the police to work with numbers?
Is 8 pounds a plant realistic?
Did they test the product before picking up the calculator?

If it isn’t the cheerleader for the ‘war on drugs’. How is the war going, cleo? Have you won yet?

Maybe the police know something about the quality of this crop that the rest of us aren’t privy to.

Or maybe they are including the possibility of the dealers offloading bags of leaf to high school kids.

Either way, sounds like a nice set up. Shame about the bust.

Although I’m sure the 155 odd other plants weren’t considered worthless.

Unless you can get 10/15 (at least, based that loosely on getting $3500-$4800 depending how you sell it) pounds off one mature plant (wouldn’t get 1 in my knowledge). You are most definitely right.

nah, that was my fully sick hyundai, bro, eh?

Hiking from Corin Dam to Bendora dam would be a great overnight hike… I wonder if the police and rangers reminded them that camping in the Cotter catchment is illegal. Still, glad to hear that they’re safe and sound – with the weather that moved through and the remoteness of the terrain, it could have easily been disastrous.

That was probably the Tuggeranong festival right next to Oxley haha

Its been infiltrated by the Canberra “jd & coke udl” scene = bogan fights.

No sunscreen allowed – What a bunch of crackpots.

Rosie Jennings - 2 hours ago
Better if there were more mobile units to catch speeding tailgaters. This I was towing a truck home today it was so close beh... View
David Brown - 3 hours ago
That is irrelevant. They are set low all across the country for exactly the same reason. $$$$$$ View
Lisa Baker - 3 hours ago
Maybe they can raise enough $$ so our rates don’t have to rise another +15% yet another year in a year... View
Opinion 5

Shane Westmore - 9 hours ago
Ch.9 are still stuck in the 90s & so are many of their viewers... it's like they want you to order Kayo View
Anthony Chase - 9 hours ago
Its got little to do with football and everything to do with ratings. View
Marlene Valenzuela - 10 hours ago
Possibly not.... Not unusual!! View
News 9

James Manukich - 20 hours ago
Well Done 👌👌👌👌👌 View
Gary Hatcliffe - 22 hours ago
Wacky-doo! View
Nassim Rezakhani - 23 hours ago
Congratulations Jason!! One of the best agents around!! Thank you for the amazing auctions you’ve done for us in the past!... View
News 25

Attorney-General Gordon Ramsay has lost his seat in Ginninderra to the Liberals' Peter Cain while the Greens' Johnathon Davis has...
Breaking 0

@The_RiotACT @The_RiotACT
The end of a relationship can bring some unexpected financial surprises. Find out what you can do to protect yourself from unwanted debt https://t.co/OumLmu6N34 (2 hours ago)