ACT Policing this morning (Friday, May 8) arrested four motorists for drink-driving offences in the city area, with two of the offenders being P-plate drivers with passengers in their cars.

Patrolling the city between the hours of 1.30am and 5am, police apprehended three drink-drivers on London Circuit and another on Parkes Way.

The two P-plate drivers recorded blood alcohol readings of 0.124 and 0.197 respectively. The former reading is six times the permitted blood alcohol content (of 0.02 for a provisional driver) while the latter is almost 10 times that permitted.

Acting Superintendent Daryl Neit, from ACTP Traffic Operations, said that cavalier attitude of these drivers toward the drink-driving laws was appalling and these offenders showed a complete disregard not just for their own safety, but also those of their passengers or other road users.

“It seems that in the early hours of the morning, motorists view their chances of being caught drink-driving as a calculated risk,” a/Supt Neit said.

“What they need to know is that this is when police are even more vigilant because this is a very high risk period . Police will continue with breath-testing operations right through the coming winter period and we’re putting drivers on notice that they can expect to see us at any time of the day or night.” 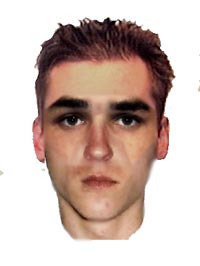 ACT Policing has released a facefit of a suspect involved in the robbery of an 18-year-old male on Yamba Drive, Mawson around 10.25pm on Monday (April 27).

The victim received facial injuries after a silver, four-wheel-drive stopped on Yamba Drive and two males exited the vehicle, assaulting the victim with a steel pole. The offenders proceeded to steal the victim’s mobile phone and wallet before leaving the scene in the vehicle.

About 11.57pm police sighted a silver four-wheel-drive on Drakeford Drive, Kambah and attempted a traffic stop. The vehicle sped away from police initiating a pursuit.

Police would urge anyone who may know the identity of the male pictured or who may have witnessed these crimes to contact Crime Stoppers on 1800 333 000.

ACT Policing is investigating an incident which occurred on Saturday (May 2) on Ginninderra Drive between Melba and Lyneham.

A green Ford Falcon and a black Nissan Patrol have collided whilst travelling towards the city on Ginninderra Drive around 8.50pm. The Nissan has pulled in behind the Falcon and appears to have intentionally collided with the vehicle again.

Both vehicles continued until they stopped by the side of the road near Lyneham, where an altercation has taken place, resulting in the driver of the Nissan threatening the Ford driver with a metal bar.

“About 11.57pm police sighted a silver four-wheel-drive on Drakeford Drive, Kambah and attempted a traffic stop. The vehicle sped away from police initiating a pursuit.”

…and presumably let them get away.

After all, it’s much less hassle to harass honest citizens who don’t run away, isn’t it?

Riiight, Emlyn, and presumably you’re one of those people that think the police were in the wrong with the Clea Rose tragedy? Seriously, you should really stop and think before you post yet another of your anti-police rants.

Freduian slip farnarkler, “….NEITHER party seems to promise heavier sentences…” There were several parties of many hues and a variety of independents running but the majority of voters (not counting the large number who couldn’t be bothered voting at all) opted for the devil they knew.

And even if our pollies not only promised harsher penalties, but actually increased them, we have an independent judiciary who act like they’re working in a discount store rather than a courtroom.

SO next time I see/smell some pithed dude buying a slab at the local bottlo a/super neit of the shrill voice will ensure his colleagues do not take a cavalier attitude to my call. Goota go, think I just saw a pig fly by the window.

SO next time I see/smell some pithed dude buying a slab at the local bottlo a/super neit of the shrill voice will ensure his colleagues do not take a cavalier attitude to my call. Goota go, think I just saw a pig fly by the window.

I don’t think civil libertarians would necessarily jump up and down about heavier sentences. A civil libertarian stands for a free and fair trial, for human rights, for decency, and for proportional sentencing sure. However that is not to say they think the present sentencing is proportional at all. Perhaps they could feel that the harming of another deserves a greater sentence than is currently being dished out.

I think it would depend entirely on the specifics of the proposal.

The civil libertarians would jump up and down about human rights if this city’s whimpish judiciary ever decided to get tough.

Then I’m sure the civil libertarians won’t mind being the ones to tell Joe Citizen his wife/child/uncle/alf/cousin has been killed by a drunk driver.

I’m sure you’re not alone but I doubt if either party has the balls to do it…………unless of course you put up a fake facebook page about one of them.

But I’d vote immediately for whatever party decided to do it even if I had to confront a jumping mass of Civil libertarians to get to the polling Booth.

Problem is that election time, neither party seems to promise heavier sentences. The civil libertarians would jump up and down about human rights if this city’s whimpish judiciary ever decided to get tough.

“About 11.57pm police sighted a silver four-wheel-drive on Drakeford Drive, Kambah and attempted a traffic stop. The vehicle sped away from police initiating a pursuit.”

…and presumably let them get away.

After all, it’s much less hassle to harass honest citizens who don’t run away, isn’t it?

Acting Superintendent Daryl Neit, from ACTP Traffic Operations, said that cavalier attitude of these drivers toward the drink-driving laws was appalling and these offenders showed a complete disregard not just for their own safety, but also those of their passengers or other road users.

Well maybe if the court did a bit more than hand them a restricted driving license and couple of hundred dollar fine people might start taking these laws seriously.

Margaret Freemantle - 3 hours ago
Tegan Martin not sure what the answer is. Somehow, there has to be some pride instilled - perhaps well kept places get reduce... View
May Mac - 3 hours ago
Is the government competing with everyone else to book tradies in to do work? Why don't they have their own, like they used t... View
Tegan Martin - 3 hours ago
The other worst part is that even if they manage to remove them, they'll have no choice but to give them another house, which... View
Opinion 50

iGonePostal - 6 hours ago
I agree. The shared and cycle paths also could do with a massive overhaul so that we have an actual network that cyclists can... View
Sport 4

Nathan Chadwick - 6 hours ago
What a great bloke - had the privilege of being coached by Rourkey at North Shore Bombers in Sydney before he moved to Ainsli... View
Sport 5

@The_RiotACT @The_RiotACT
It could be your dream home - this spacious #Ngunnawal family property is one of the best to go on the market in a year https://t.co/hn7Z1isnmC (4 hours ago)