Prepare to feel the full wrath of the Brumbies, warns Erasmus 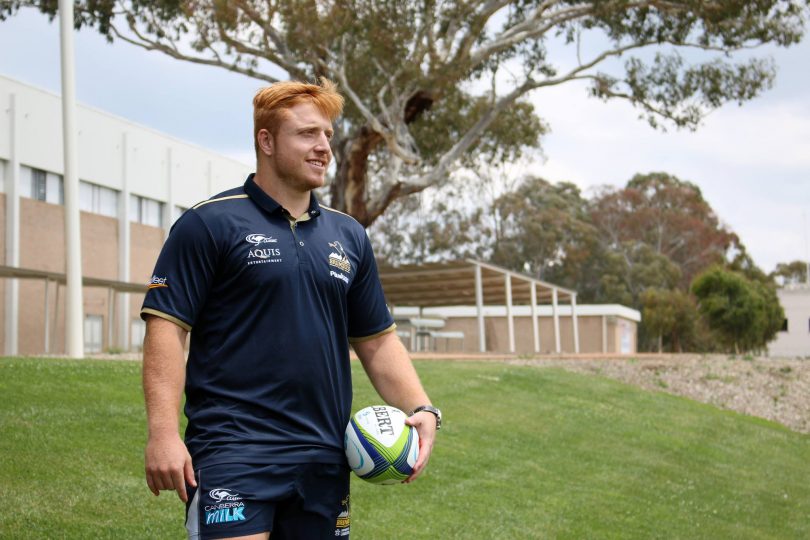 The ginger prop said he knew of the big rivalry between the Crusaders and Brumbies even when he was living in South Africa. Photo: Supplied by Brumbies Rugby.

They aren’t in the greatest form but Brumbies prop Mees Erasmus is warning the Crusaders to prepare for the full wrath of an angry Brumbies side on Saturday night.

The Brumbies suffered their fourth loss of the season with a sloppy performance against the Jaguares on Sunday afternoon and the Canberra side now faces a team they haven’t beaten in almost a decade.

The Crusaders meanwhile are sitting pretty on top of the New Zealand conference and are coming off a 22-point win over the Sunwolves.

But Erasmus has a feeling that the Crusaders are not going to have it all their own way in Canberra and will end Australia’s 36 match winless streak against Kiwi teams.

“[I have a good feeling that] the Crusaders might come here to Canberra and get the full wrath of the Brumbies.”

“I don’t know how many games the New Zealand teams got over Australian teams, but I have a good feeling about this weekend that it might change,” Erasmus said.

“The boys will be rearing to go after the loss. We know that we made a few dumb mistakes this weekend but we will come back hard this week.”

The South African born prop believes the Brumbies need to conquer their biggest hurdle – their mental side – if they are to cause a major boilover in Canberra.

The 23-year-old received his first cap for the Brumbies after coming off the bench during the Brumbies loss to the Jaguares.

“It’s an incredible feeling, just running out there, goosebumps all over and straight into a scrum, so that made me just forget about everything,” he said on Tuesday morning.

The ginger prop said he knew of the big rivalry between the Crusaders and Brumbies even when he was living in South Africa.

“I definitely know about the rivalry. Growing up, I obviously watch the games and it’s pretty big in South Africa as well when the Crusaders play the Brumbies,” he said.

“Its definitely going to be a big challenge playing against New Zealand teams, but I back our team and our squad’s ability to take them on.”

“We just have to iron out a few errors and we will be good.”

Rohit 'Swarley' Singh - 2 minutes ago
Mate you missed out. Those were the good old days. There was this club called academy, where you could be sure to get a staph... View
Rohit 'Swarley' Singh - 5 minutes ago
The old demand a 50 upfront then charge you cause you're cooked again View
Buck Johno - 13 hours ago
From what I remember of night rider busses it was only over summer. View
Food & Wine 26

Ryan Hunter - 3 hours ago
is this a news page or a lobby group? every 2nd article is about cyclists wanting more and more money spent on them. View
Jim Reid - 3 hours ago
Act Gov't is only interested in Geocon developments than anything to help sport nor cycling facilities.....a bit ironic for t... View
Carley Weiss-Kelly - 4 hours ago
Brian Weiss thoughts 💭 View
News 35

theroundone - 4 hours ago
Who's getting punished, though, asides from law abiding rates payers in this city? A racial or sexist epithet is treated more... View
Capital Retro - 17 hours ago
Violent home invasions targeting keys for owners' luxury cars are now out of control in Canberra. Very few details are subjec... View
Daniel Lesky - 19 hours ago
Jason Malcolm could be worse not like she needs to go to charnwood View
News 11

Meg Redmond - 5 hours ago
It’s a waking nightmare Linda Gee the only flight I was able to see tday was 24,000 economy one way View
Linda Gee - 7 hours ago
Jeez, that's not good. 😥 View
Meg Redmond - 7 hours ago
I’m not sure it is Linda Gee he is struggling to get one at 4000.00 showed available to me yesterday he tried to book it an... View
Food & Wine 1

George Frilingos - 19 hours ago
Angelina Mamatas are you still interested? Huge investment. We would need a great business plan, and with people not able to... View
show more show less
*Results are based on activity within last 7 days

@The_RiotACT @The_RiotACT
A trial has been launched to reduce conflict in Canberra hospitals, and make the healthcare experience less stressful for staff and patients https://t.co/PcXGCHUbcG (1 hour ago)

@The_RiotACT @The_RiotACT
Geoff Burton is well known for movies like Bangkok Hilton, but these days the filmmaker is relishing life in the vineyard at Gundaroo’s @GundogEstate https://t.co/2tYfZorXio (3 hours ago)