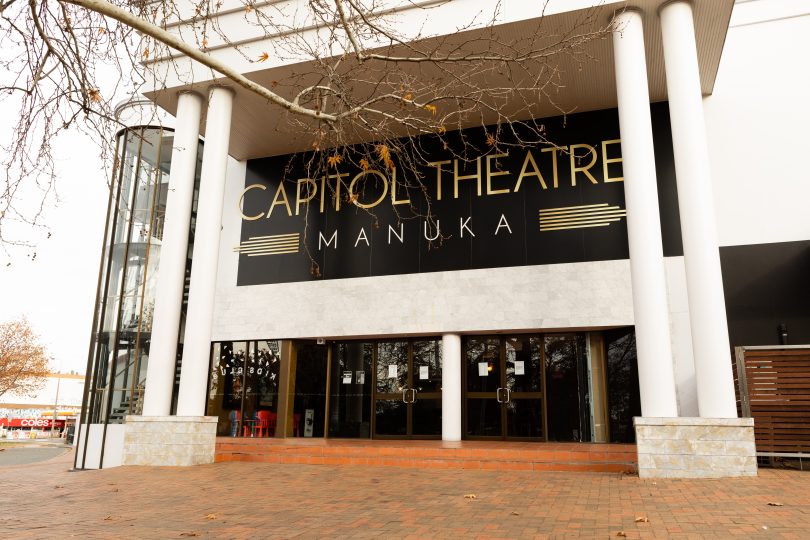 The Capitol Theatre building in Manuka is at the end of its commercial viability. Photo: Daniella Jukic, wearefound.

Fears that a hotel development planned for the nearly 40-year-old Capitol Theatre site in Manuka would see the demise of a cinema in the inner-south have been quashed with confirmation that it will include a modern six-screen complex.

The owners of the site, the Liangis family, is embroiled with the ACT Conservator of Flora and Fauna over a protected tree on the site that is stymieing the development, and will go to the ACT Civil and Administrative Tribunal in a bid to have the mature London plane tree taken of the ACT Tree Register.

But John Liangis said when the staged development eventually gets the go-ahead, the new cinema complex would be incorporated into the hotel, be digitalised and have six screens as there is now but at a smaller scale, with seating from 80 to 120 seats in each space, much like the Palace Electric set-up in NewActon.

He said the current cinema was beyond its use-by date and had reached the end of its commercial viability.

The auditoriums, including one designed as a theatre holding 400-plus patrons, were far too big for a modern cinema complex.

The Manuka cinema is part of the Greater Union chain and the family is negotiating with it to continue operating the new complex.

The current Capitol Theatre building replaced the former structure of the same name that was demolished in 1980, and had a dual purpose as a theatre and a cinema.

Build it, cut the tree down and plant 10 more. Move

For your information the red icon represents the location of the trunk. The coloured area is the area which construction and demolition are prohibited.

That tree is an allergy death trap. Do we really need it??? Can we not plant another 5 trees in the new design that are not so allergic?

How much time do you spend under that tree ? To get allergies...

Just walking past is enough to set off an attack. And I'm not alone

Good on u geocon

Go to Europe, Asia, Africa, South America and you will see buildings 1000 year old (and sometimes older) which are proudly promoted.

Meanwhile here in the ACT we sacrifice any structure that’s older than a fortnight to the altar of ‘progress’.

To be fair, the way most buildings are built on this side of the country these days, the buildings only last a fortnight!

How many trees for the toy train?

The building that pre-dated this one was nicer.

Do we really need another hotel? I know many hotels are worried about occupancy rates as it is let alone more competition coming along?

Kerry Crampton yes our hotels are at capacity...

Should never have pulled down the original building

Jp Romano I protested back then

Jp Romano no, there was a big stink but nobody cared. It was an amazing old building

Just update the cinema, leave the tree there! Enough greed.

Tony Morris that is a redevelopers opinion!!

Margaret Freemantle and agreed by most local residents and businesses.

Margaret Freemantle and also a residents opinion too!

I am so glad the cinema will stay, never went to the cinema as much in my life as the 3 year I lived 3 minutes walk to this old lady.

A new Cinema Complex ,great!! they need to get rid of the outdated cinemas that are there now ,toilets are disgusting ,if Work and Safety went there they would close the place down ,who cares about a bloody tree ,!!

Seems a lot of people have the same opinion as I have !!

That cinema is a mould-ridden cesspit anyway. Needs a complete refurbishment.

Jane Kim - 35 minutes ago
Mary Kingsford different app. The NSW one is part of a bigger site. The ACT’s is far easier. View
Mary Kingsford - 2 hours ago
With the NSW app you sign in and then out. Why with the ACT one is it just signing in? View
Kerri Hallas - 3 hours ago
I got bailed up at the Telstra shop on Friday, telling me it was mandatory!🤨 View
Property 43

Maya123 - 1 hour ago
Most first home buyers I would guess buy in outer suburbs. If they find they have to do this, what is the difference with som... View
JS9 - 5 hours ago
There must be more to the story - as much as a break in rental through sale can see a readjustment of a price, seems very unl... View
JS9 - 5 hours ago
An owner-occupied home is just that however Maya - owner-occupied. A rented property is not - at the end of the day, while yo... View
Opinion 2

JS9 - 5 hours ago
Since really the design of Gunghalin sadly it seems to have all gone out the door in terms of the poly centric design. View
Capital Retro - 6 hours ago
In what way is Canberra "improving"? We have more social disamenities than ever before with ever increasing rates and taxes a... View
bj_ACT - 15 hours ago
Canberra is definitely improving and cities between about 400k and a million have great amenities without the negatives of ma... View
Breaking 4

JC - 18 hours ago
What sections of stage 1 are poorly designed and need fixing. As for the traffic lights you gotta be kidding right? As both a... View
Capital Retro - 20 hours ago
Three things to remember about the light rail: 1. The Greens want it. 2. It's all about urban renewal; it was never about pub... View
Sport 4

Commuters from Woden to the City will be swapping their Rapid buses for light rail once the line is connected...
News 28

@The_RiotACT @The_RiotACT
What's the cost of damage done by climbing CO2 emissions? A new report will give the government a dollar figure https://t.co/FX0qMbpUyH (37 minutes ago)