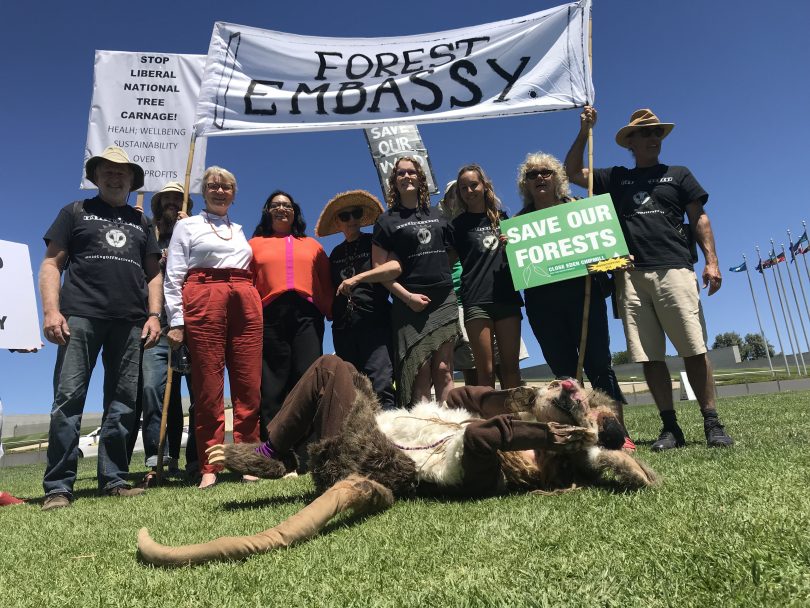 Hundreds of concerned citizens rallied at Parliament House in Canberra on Wednesday, 13 February to protest against the logging of forests around the country. The National Forest Uprising rally was part of a series of protests against the destruction of public native forests throughout NSW and Canberra, in a bid to influence the government to end native forest logging by 2020.

Mr Harry Laing, who lives close to Monga National Park, told the crowd the logging was “mayhem”, labelling it “an economic absurdity.”

Mr Laing said Forestry Corp’s own figures say they might make between $90,000 – $200,000 out of the logging of compartment 517 which borders the historic Corn Trail and Monga National Park.

He said 30 per cent of what was taken was for woodchip and 28 per cent for firewood. Only 22 per cent would go for sawlogs. Mr Laing said the “trees are worth a lot more standing.”

A spokesperson for the National Forest Embassy says “the people of Australia are increasingly worried about the depletion of native forests, particularly in the south-east regions of New South Wales.

“We are urging the federal government to act quickly to preserve what remains of Australia’s diverse ecology,” the spokesperson says. “Our governments have locked Australian forests into another 20 years of Regional Forest Agreements and the IFOAs, with barely any consultation. The people have had enough.”

Prof Don White, Chair of the Nature Conservation Council of NSW said “The Regional Forest agreements struck between our Federal Government and the States 20 years ago have demonstrably failed to provide the solution. However, they have essentially been rolled over recently without any real examination of their effectiveness.

“Forests must remain standing to provide carbon sinks to offset climate change, to provide healthy water catchments and prevent siltation of our rivers and provide the wilderness and biodiverse refuges for our insects, and fauna.” Prof White said. 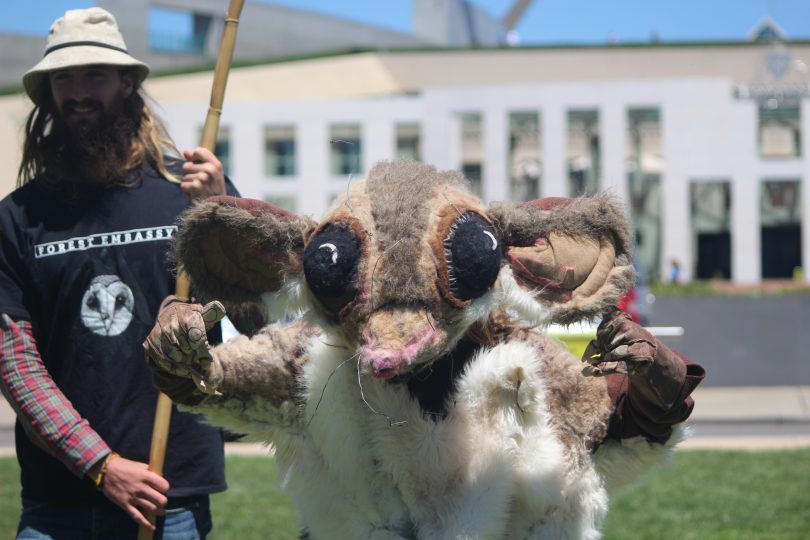 The Greater Glider is one of the endangered animals affected by logging.

“The Federal government’s 20 year experiment in abandoning our forests to the States and logging companies, via ‘Regional Forest Agreements’, has been a disaster – for our forests and wildlife, for our climate and water catchments, for regional communities and sustainable jobs.

“An area the size of 5 MCGs is logged every day in Victoria alone, mainly for woodchips. This is just madness.”

The National Parks Association of NSW (NPA) said “Ironically, the Canberra Uprising took place at the same time as Parliament House was occupied to protest against government inaction on global warming, and Aboriginal people protested against the ecological collapse of the Murray Darling. Together the protests highlight deep and systemic failings in the protection of Australia’s national heritage – and growing public concern about it.” 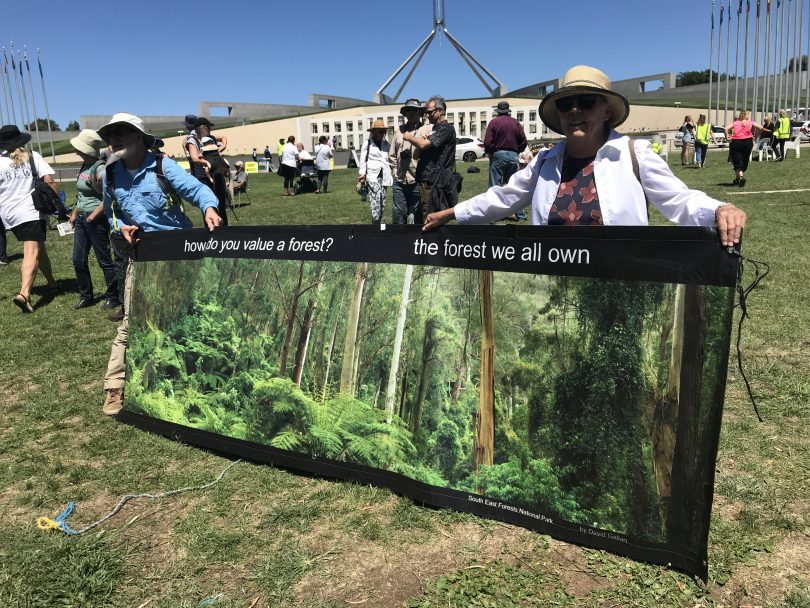 AJ Brown was Blockade Liaison Officer for the South East Forest Alliance in 1989, in the period when over 500 people from all walks of life were arrested in the Bega and Eden region, making it Australia’s biggest ever environmental protest.

Now a Professor of Public Policy & Law at Griffith University, AJ Brown told Region Media: “People don’t understand that there is no sustainability to this type of logging — trees that have taken centuries to grow are not coming back anytime soon.”

“Old growth native forest logging should be seen for what it is: a third world activity. We don’t support it in Borneo or the Amazon, and we shouldn’t allow it in our own environment, which is just as ancient and in many ways more fragile,” he said.

Amongst the protesters were a swag of incognito Australian musical legends with 30 gold records between them. 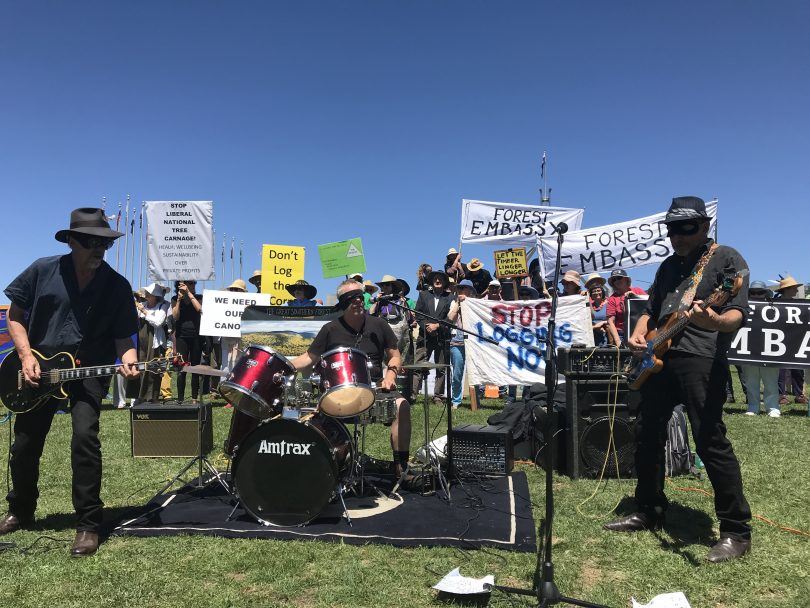 Logging is a tricky issue. Currently we need the products.

So how do we source them? The easy solution is to ban logging here, rely on imported timber and ignore the unsustainable practices that those countries are following.

Another option is to use plantation pine grown here in Australia. Unfortunately pine plantations are a blight on our environment, almost being ecological deserts.

A third option is plantation natives. Yes they may be slower growing than pines, but at least in those decades while the trees are growing they can provide food and other resources for native animals.

Sure harvesting native plantations every four or five decades is very disruptive to the native animals that live there, but at least during that time there have been generations of those animals, which is more than can be said for pine plantations.

Uprising! Hundreds! More like 30, check out the video. The purported Australian musical legends didn’t seem to draw the crowd!

Thats a bit harsh mate, Richard Bergman the Sunnyboys has just come off stage playing to crowds of 6000 a night on a sell out Australan tour. There certainly were hundreds of people standing up to speak up for Forests in Canberra and many more from all over the country – nice try though! I suppose you’re not that keen on wildlife and oxygen though – fair enough. The Lone Band sounded great on ABC Sydney yesterday with the release of their debut single BAD NEWS! Can’t wait to hear more – the Lone Drummer is a dead set legend and I would go anywhere to hear him play, with or without his band.

Again, the Green side of the argument misrepresenting the facts.
Old sinessing trees are nett carbon emitters. Regenerating forests capture carbon in far greater volumes than older forests. The days of logging for woodchips as a primary product are gone…perhaps the higher volumes are due to older generations of foresters and loggers harvesting the eyes out of the resource when silviculrurally it was not the right thing to do. And one last point- forestry is the only truly renewable resource, still form the basis for so much of the construction industry and have permanently stored carbon.
Yes, no doubt I will attract abuse in what by now should be an informed and respectful debate, but I have come to expect this over the years and these are the facts plain and simple.

This seems at odds with the research.
https://openresearch-repository.anu.edu.au/handle/1885/65694

Ben Roberts wrote “Old sinessing trees are nett carbon emitters.” I have searched for siness(ing) on the net and can’t find it used anywhere else but here. Three Dictionaries did not know it. Do you mean rotting trees?