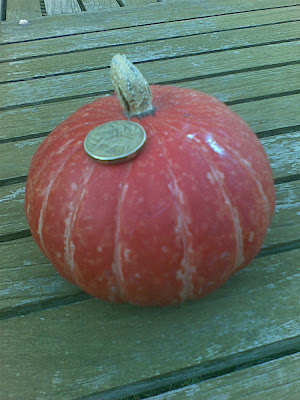 For the past five or so years I have been growing various types of pumpkins in the vegie patch, but have been underwhelmed with some of the varieties in Canberra’s climate.

Both the Queensland blue and Jap varieties produced well, but were a bit tardy on the ripening stage at the end of the season. They were certainly edible, but didn’t quite develop the full range of flavour. I’d say the first cold snaps snuck up on them earlier than they expected.

Butternuts were a little better, but still not perfect.

This year, however, I tried golden nuggets … and they are superb. Smallish pumpkins, but heaps of them … and ripened perfectly despite the latest cold weather.

Another advantage is that they don’t seem to have the same tendency to make escape attempts into new territory beyond the allocated patch.

If you’re into growing your own, try them out, and you’ll be gobbling down a golden shower in May.

I’d always thought that the Jap pumpkins were short for Japanese, but I found out over easter it’s an acronym fiven to the line by the people that developed it. It stands for Just Another Pumpkin … doesn’t sound half as exotic really.

They’re also known as Kent pumpkins. i had no luck with mine this year, the flowers didn’t start til late, and it’d just set fruit when a frost came and the whole lot crumbled like a stabbed vampire.

Lots of people like to talk about pumpkins, Dummett. What do you honestly think you can achieve by these posts?

good to see you went well at skool too!

We only ever used to grow butternuts. Will have to give these a go.

LOL, i think they’ll be dissapointed when they see its about pumpkins

Nah, if anything his post will spawn some freaky jack-off-lantern fetish site…

“you’ll be gobbling down a golden shower”

maybe he has been peeing on them, like a lemon tree?

Meh, golden showers have been around forever.
Thats how Perseus, Blinder of Crones, Thief of Teeth, Slayer of Medusa, Inventor of Quoits, was conceived. (Danaë was locked in a subterranean cellar by her father, so Zeus appeared before her as a golden shower, and doing so got her pregnant…)

LOL, i think they’ll be dissapointed when they see its about pumpkins

We grew these as well. Go great. Next year there will be more.

I think that’s funny … it makes me look upon them extra fondly!

I’d always thought that the Jap pumpkins were short for Japanese, but I found out over easter it’s an acronym fiven to the line by the people that developed it. It stands for Just Another Pumpkin … doesn’t sound half as exotic really.

The coin is there for scale, I reckon. I love these little pumpkins and now Ari’s gone and made me feel all hungry. Actually any kind of pumpkins. Pumpkin is one of my favourite things in the whole world!

Is the 1 dollar coin supposed to symbolise that your pumpkin grew bigger than it? or is it there for decoration..

I think he was taking the piss.. Literally 🙂

Lady across the street gave me some of these; they were delicious and I used the smaller shells as individual soup bowls at a dinner party (containing pumpkin soup, made from the said pumpkins). Great tip and I might grow my own next year.

“you’ll be gobbling down a golden shower”

Elizabeth Ann Thurbon - 8 minutes ago
Kate Bee I don’t know the figures on that sorry View
Tina Maree Williams - 1 hour ago
My other half and I saw the writing on the wall when the eyesore of Whitlam increasingly impinged on our view driving down Wi... View
Demi Naylor - 9 hours ago
Well.. you know.. f they can afford a house or find one suitable to rent.. View
Opinion 66

rossau - 14 hours ago
Commandeering all land and rental property is no avenue to request the government to financially support the practice. Get ou... View
rossau - 15 hours ago
Julie Macklin, that's a great idea. The point is though, an owner has the option on upgrading on the gounds of comfort, cost... View
show more show less
*Results are based on activity within last 7 days

A huge family home in Florey has sold at auction for $1.6 million, setting a record for the Belconnen suburb....
Opinion 73

Whether you’re catering the next big family BBQ or preparing for a Sunday roast, any good home cook will know...
Opinion 73