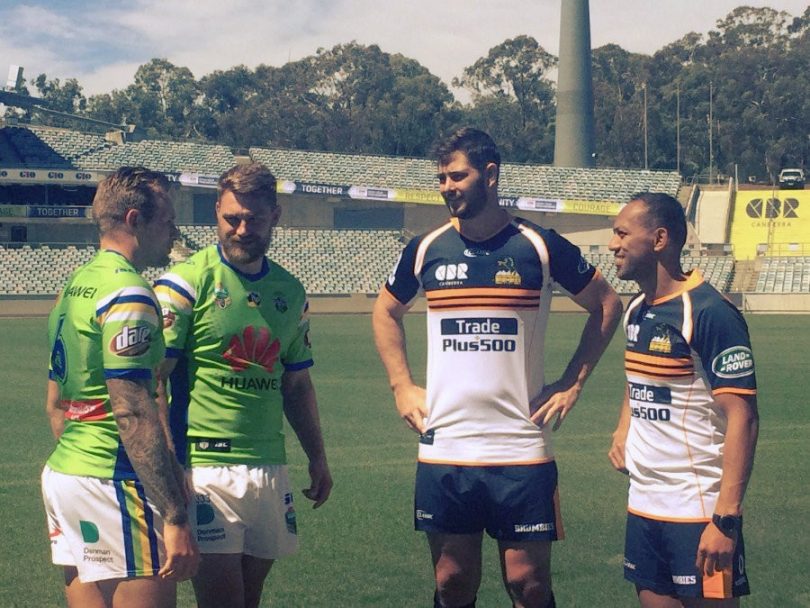 Enjoy double the Rugby at GIO Stadium on the 17th and 18th of March. Photo: Lachlan Roberts.

In an effort to increase crowd support, the Raiders and Brumbies have come together to give Canberra sports fans an opportunity to support both teams for a discounted price.

For the opening home games of the 2018 season, the Brumbies and the Raiders are offering members from each club a free general admission entry to the other club’s game.

Brumbies CEO Michael Thomson said that his side was excited to give Canberra sports fans an opportunity to support both of Canberra’s football teams.

“We are delighted to be able to link up with the Raiders for this amazing opportunity for supporters of Canberra’s football teams. The Brumbies have a long-standing friendship with the Raiders and the chance to take in both matches on a weekend is a tantalizing proposition for any sports supporter in Canberra and the region,” Mr Thomson said.

Canberra Raiders CEO Don Furner said the joint ticket offer was an opportunity for sports fans in Canberra to feast on a weekend of top-level sport, with the Brumbies and Raiders working together to benefit the whole community.

“We are very excited to have the opportunity to deliver this promotion along with the Brumbies, to ensure both codes maximise their crowds for the opening home games for the 2018 season.”

“We’d love to have huge crowds back to back at GIO Stadium and show the rest of the country what a wonderful backdrop we have in Canberra for both rugby codes.”

Brumbies coach Dan McKellar is a rugby league fan, having grown up in North Queensland, and will be there when the Raiders take on the Knights.

“I think it is a great initiative to support both teams because Canberra is a much smaller community than the bigger cities so we have to help each other out.”

To access this offer, members simply need to scan their membership card at the game with special entry aisles dedicated at GIO Stadium.

Non-members can also purchase an adult general admission double pass ticket for only $40, giving you access to both games that weekend, amounting to a saving of 28 per cent.

Tickets can be purchased online at Ticketek or at the gate on matchday.

Judi Pearce - 23 minutes ago
Thanks to this special lady ! I have one of these blankets exactly as pictured. My dear mother (Ollie Dyball) purchased it fo... View
Opinion 29

Grant Hunter - 2 hours ago
Julie Macklin lots of people aren’t jabbed Brownshirt View
Julie Macklin - 3 hours ago
Susan Williams Are you not vaccinated? Vaccinated people mostly don't have a problem with this; only the unvaccinated. It's a... View
Michael McDonald - 4 hours ago
Meegan Ward Well said. View
Property 1