Foxsports have the grim tidings out of Canberra Stadium where the Raiders were humiliated by the Melbourne Storm.

Coach Furner says the scoreboard doesn’t reflect the “attitude” of his side. 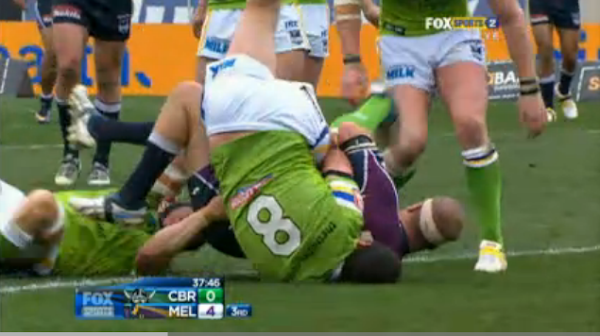 Meh, the Raiders already gave the Storm an embarassing touch-up earlier in the season, and that was more unexpected than the result from yesterday.

Highlight of a dismal match was Thompson’s big hit. Such a pity Dugan didn’t line up Slater in a similar fashion when he was making his trademark dash through the midfield. If you can’t beat ’em, bruise ’em. No doubt the Raiders were totally outclassed in this match though. Furner can bang on about “attitude” all he likes, but when the team plays like an under 12’s schoolboy side his words mean very little.

twas truly a beautiful thing to watch. the dugan sent flying, along with the hopes of raiders fans, as the storm hold the useless to nil. first time at home in 30 years

now all we can hope for is Thompson to get a few weeks on the sideline for his dog shot on kostjayson (sp?) and a top weekend will be complete

Marea Fatseas - 6 minutes ago
David Riddell the waste normally going to landfill in Mugga Lane wouldn’t be enough to meet the proposed CRS target of 300,... View
Capital Retro - 14 hours ago
Double handling makes no commercial sense but the ACT government is worried about that. It is more likely that the waste we a... View
Maya123 - 15 hours ago
I have been in Canberra since way before 2008; 1974 in my case, and I always heard Fyshwick referred to as light industrial b... View
News 45

It was a curious election count watch on Saturday night (4 July) as the ABC's Antony Green tried to make...
News 23

In a recent RiotACT column on banksias, I mentioned black-cockatoos in passing – and nearly all the subsequent comments focussed...

@The_RiotACT @The_RiotACT
The owner of two distinctive office buildings in City West plans a $4.7 million revitalisation for the precinct, with the centrepiece being a new pedestrian plaza connecting them https://t.co/wJkzDPrrJl (57 minutes ago)