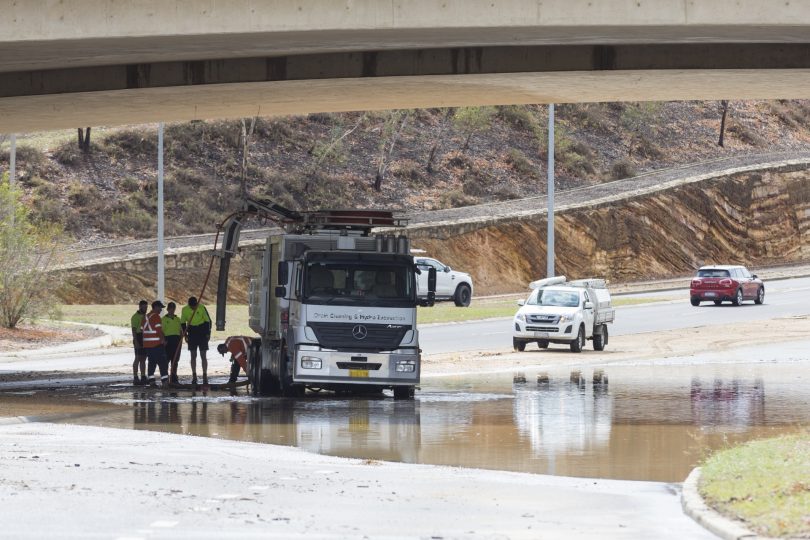 The rainfall of the past few days has not significantly improved storage levels in Canberra’s four dams, and while small increases have been recorded by Icon Water, it will take up to a week before the rain flows into the dams.

General Manager of Icon Water’s Infrastructure Services Group Gerard Brierley told Region Media there has been good rainfall in the catchment area, which has been very encouraging.

“We anticipate inflows to storages to continue to improve and consumption to reduce in the short term. However, there has not been enough rain to significantly improve our storage levels,” Mr Brierley said.

“In the longer term, it will take sustained rainfall over an extended period or a return to average rainfall conditions to significantly increase Canberra’s water storage.”

This morning, the combined levels of the ACT’s four dams was 44.41 per cent.

The Minister for ACT Police and Emergency Services, Mick Gentleman, also removed the state of alert that has been in place since 2 January. The decision was taken due to favourable weather conditions, including the recent rainfall.

However, the ACT State Emergency Service responded to more than 360 requests for assistance since 9:30 am yesterday following widespread rain on Sunday and Monday (10 February).

Some roads in Canberra have also flooded, with ACT Policing warning drivers to avoid State Circle under the Commonwealth Bridge in Yarralumla and Canberra Avenue near Fyshwick.

“The issue is going to take some time to rectify. Stay away from the area,” ACT Policing said this morning.

Crews from ACTSES, ACT Fire and Rescue, Transport Canberra and City Services responded to calls for help regarding leaks from roof damage, with many homes revisited after the recent hailstorm. 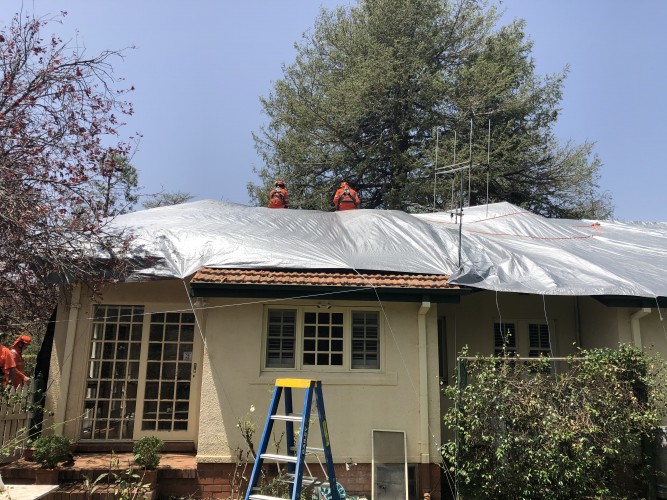 “Our volunteer crews are busy on the ground and are working as quickly as they can to clear jobs. Please be patient as we respond to each and every call out throughout the day,” an ACT Emergency Services Agency (ESA) spokesperson said.

The Bureau of Meteorology (BOM) predicts thunderstorms this afternoon (10 February) and the ACTSES says Canberrans should take steps to keep their property safe.

“Secure any loose items around your property, avoid parking under trees and do not enter or drive through flooded areas.”

Rainfall totals varied with Mt Ginini, near the Orroral Valley fire ground, recording 76 mm of rain. The ESA said the rainfall will not extinguish the fire, although milder temperatures and continued rain have greatly assisted fire suppression efforts. The fire continues to burn in patches but within a secure perimeter.

“The fire is being controlled, meaning effective strategies are being implemented and planned for the entire perimeter of the fire,” an ESA spokesperson said.

“We are taking this time to plan and prepare for containment operations that will take place later this week.”

Some farms in the region have reported falls of up to 85 mm of rain, while the BOM said it had recorded 60.4 mm of rain at Canberra Airport up until 9:00 am on Monday (10 February).

The BOM says there is a greater than 50 per cent chance of rain falling for the rest of the week. 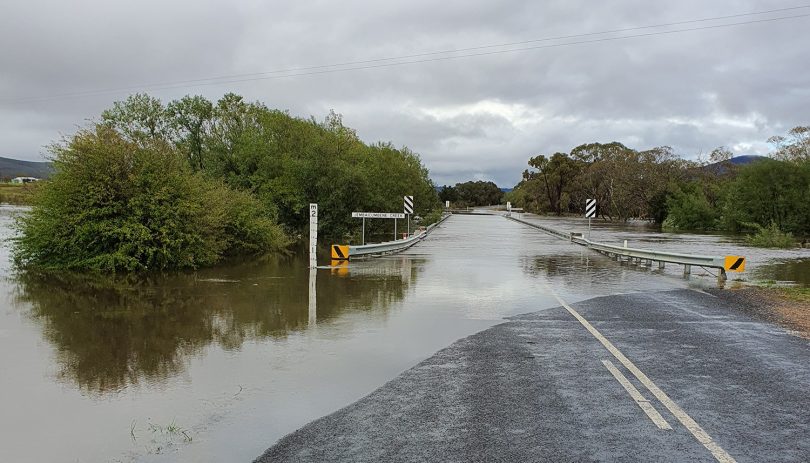 ACT Chief Minister Andrew Barr said January has been a challenging month, with a number of extreme weather events impacting on the community.

“With the state of alert now lifted, the community can look forward to a greater sense of normality,” Mr Barr said.

“We are forming a clearer picture of the impact of this summer of disasters and have already started efforts to support households and businesses to recover. The impact of extended periods of poor air quality, as well as the travel ban from China, will be felt by many local businesses and organisations for some time.”

Mr Barr said the ACT Government will continue to assess the ecological impact of the Orroral Valley fire, which has burnt through about 80 per cent of the Namadgi National Park.

While Sydney and coastal areas recorded flooding rain, the NRMA said it had received more than 7000 requests for emergency assistance across Sydney, Newcastle, Canberra, Wollongong and the Central Coast.

The overwhelming majority of calls have been for flat batteries, flooded engines and flat tyres, while road closures have made it difficult for roadside assistance patrols to reach stranded drivers.

Six months on, the good news is that combined storage levels are now about two-thirds greater than they were in February – but we still have a way to go before we’re back to the peak storage levels of 2016-17 –

Or an economist to reconfirm that we can still have endless growth.

Hmm hot weather and storms in Australia…. almost sounds like a typical summer to me. The doomers can’t seem to separate weather from climate. The climate change cult predicted no substantial rainfall until May, yet none of them foresaw this downpour, yet they want us to believe they know what will happen in 20-50-100 years. They also foresaw the bushfires, please spare me, blind freddy can foresee bushfires in an Australian summer.

Climate change is perpetual – it’s only the things you warmists are predicting that are a hoax.

Looks like ACT is missing out on the deluge.

Ian McLeod 59mm at my place, but at least my rainwater tank is now just over half full.

Ari Rex - 20 minutes ago
Thanks a lot for the interview The RiotACT ❤️ View
Ari Rex - 21 minutes ago
Fenji Stradwick You are so kind 😊 View
Shirley Hadfield - 1 hour ago
Beautiful Shot. Would love to Purchase a copy! View
Food & Wine 33

chewy14 - 3 hours ago
Stephen, I have no idea what you think I have to do with Stanhope but why would I move on from poor planning? If people voted... View
News 3

Chris Hart - 3 hours ago
Jasper Roo seems to be a pattern with Nrma. View
Trish Roberts - 17 hours ago
As a Housing ACT tenant there’s not much I personally can do to prepare. View
Jasper Roo - 18 hours ago
I’m still waiting for the repairs to my roof to be completed from the hailstorm in January. Thanks NRMA 🙄🙄 View
Opinion 52

Geoffrey Bell - 7 hours ago
The money is in the land if you want to upgrade down the track, steer clear of apartments. Rentvest is another way to get on... View
Julie Macklin - 15 hours ago
Rheyce Spears Did your mother and grandmother have male guarantors? View
Andrew Dale - 17 hours ago
A 1 bedroom apartment is all you will get for 350k View
News 19

HiddenDragon - 16 hours ago
A sovereign aerial firefighting force should have been established long since - it could have easily been afforded back in th... View
Lin Van Oevelen - 17 hours ago
John Moulis The cause of the fires was said to be the fast growing grass and undergrowth because of more rain, so that does s... View
Capital Retro - 20 hours ago
Lets debunk this notion now that climate changed was the cause of the 2019 - 2020 fires. The Ororral Valley fire was ignited... View
Food & Wine 31

Lynn Stape - 18 hours ago
agreed... I couldnt think of much worse than cleaning in a hospital at the moment... talk about front line staff.... View
show more show less
*Results are based on activity within last 7 days

Leadfoot drivers beware - the ACT's speed detection net is about to be widened with the addition of two new...
Lifestyle 5

When the night sky lit up with multiple lightning strikes over Black Mountain in January 2019, Canberra photographer Ari Rex...
News 10

The ACT's mowing team is battling to stay on top of exploding grass growth in a season vastly different from...
Food & Wine 33

A short menu that’s long on authentic flavours is a winner in any language. A handful of traditional dishes interspersed...
Opinion 30

The village feel is back in ‘Old’ Kingston! The beautiful suburb with its luscious treescapes and green spaces has been...
News 19

A good drink but region needs much more to break drought

@The_RiotACT @The_RiotACT
The Bega Valley’s iconic history of cheesemaking continues thanks to businesses like Niagara Lane in Kameruka https://t.co/1WZDQivJFV (33 minutes ago)

@The_RiotACT @The_RiotACT
Bushfires and pandemic add extra pressure for new mums in the ACT and southeast NSW https://t.co/DUeAKAq5Yy (1 hour ago)

@The_RiotACT @The_RiotACT
Tiny pardalotes are more often heard than seen in Canberra. But what does their silvery call say? Naturalist Ian Fraser has a few ideas https://t.co/n2a3MyuRZR (4 hours ago)