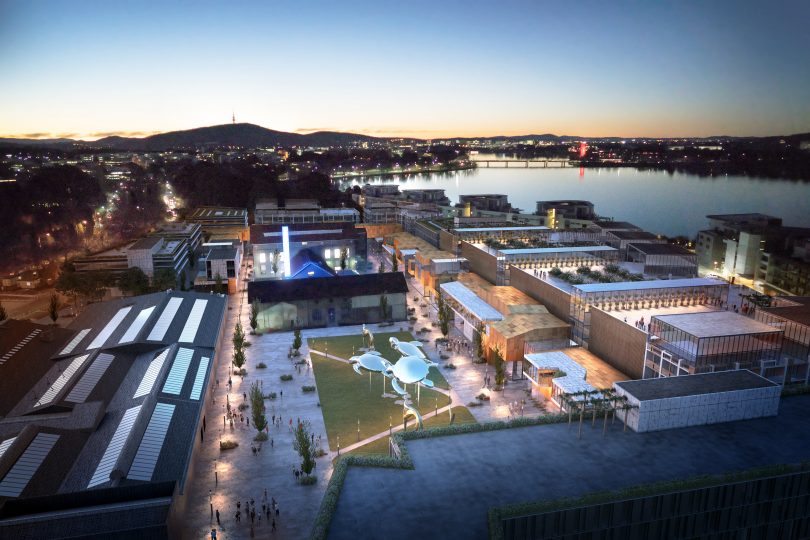 A view of the proposed Kingston Arts Precinct from architects Fender Katsaladis. The concept ignored the work of the 2014 Master Plan. Image: Supplied.

Heritage and community groups have expressed relief that the ACT Government has cancelled its contract with property giant Geocon to develop the Kingston Arts Precinct and the Suburban Land Agency is taking charge of the project.

National Trust ACT president Gary Kent said the organisation was delighted with the decision, while Kingston Barton Residents Group president Richard Johnston, who sat on the Community Panel for the project, said there was “general relief that the group no longer had to deal with Geocon”.

Comment was sought from Geocon, for which this project would have been a signature and prestigious development, but it is leaving all the talking to the government.

The two parties are now involved in commercial negotiations towards a “mutually acceptable outcome”.

Mr Kent said the Trust knew things were going badly and had been worried about the dearth of information about the project in recent times.

“The Community Panel had not met for 12 months, so clearly, there was a lot of internal discussion about how to proceed,” he said.

“We’re really pleased from a heritage point of view that one of the main reasons for the change in plans is to ensure that the heritage aspects of the site are maintained and respected.”

Mr Kent said that some minor changes went part of the way to addressing the Trust’s concerns, but the preponderance of commercial development at the site remained a worry.

Other issues included the tall buildings on Wentworth Avenue obscuring the views of the important heritage buildings, whether it would be fit for purpose for the arts groups, the potential impact on the Old Bus Depot Markets and the four-storey car park.

“I think the government has come to the view that it was simply not tenable any longer to deal with Geocon on the heritage aspects,” he said.

Mr Johnston said Geocon and its architects Fender Katsaladis would not budge on the scheme put to the community in July 2019 which ignored the 2014 Master Plan and offered a concept based on medieval Siena in Italy.

He said the Master Plan allowed for more open space, maintained the vistas and did not propose development along Wentworth Avenue.

The car park to replace the current parking spaces that would be lost was a major sore point as it intersected the view lines and dominated the middle of the site.

“They refused to sink it into the ground a bit to make it less conspicuous and refused to consider any alternatives to putting all the car parking in this massive structure in the middle of the site,” he said.

Mr Johnston said the community was looking forward to a much better, more responsive community consultation process, referring back to the principles and layout of the community agreed and government endorsed Master Plan.

“That’s the starting point,” he said.

READ ALSO As libraries start to reopen, let’s celebrate the impact they have on our community

Both he and Mr Kent lamented how arts groups had been muzzled throughout the process and hoped they would now be able to talk openly about their needs and views on the project.

“There was a view that some of the arts organisations didn’t feel they were being looked after,” Mr Kent said.

He said the complexity of the site and the community demands may have made it difficult for Geocon to see a way through for the project to stack up financially.

“But the government’s responsibility overall is to make sure that the precinct is protected and used to community benefit, not to the return to developers,” he said.

Both he and Mr Johnston said the public-private partnership model had worked with the Canberra Brickworks development in Yarralumla, but in hindsight, it was not appropriate for the Kingston Arts Precinct.

Mr Johnston was glad that the government was now taking the lead.

“We are hoping that the government will now be much more hands-on in managing the process and much more receptive to the community and heritage concerns,” he said.

The government says re-engagement activities will commence as early as December.

As a long term resident of Jardine St. I am keen to see a positive development of this area. But l wonder if the usual government consultation will be to ask the community their opinion…and then do what ever they want. Unfortunately, their past record leaves a lot to be desired.

Thank you ACT Heritage Council for pressing for the legislated heritage requirements to be met. The area’s industrial heritage, rare in Canberra, needs to be celebrated, not hidden by tall buildings.

Yet another gold-plated ACT Government disaster!!!
Seriously, can they do ANYTHING right???
They really are turning the National Capital into the National Crapital.
Time for Barr, Steel, Gentleman, Rattenbury and their quota-driven, tenant-loving, mung bean eating cronies to bugger off to Nimbin and allow more sane and balanced people to restore Canberra to its former glory.

It would be a death knell for the whole marketing/craft place. Only good for restaurants and apartments.

Geocon’s design shows generic four storey buildings stacked up to the street. Then they claimed this will somehow ‘frame views to heritage buildings’ through tiny alleys? I thought it was a joke. Honestly dont know how they could have ignored the supposed ‘master plan’ in the first instance. How did it get so far ?

I’m glad Geocon weren’t given the job to update the Sydney Opera House.

I’m just pleased that we won’t be seeing the sexualised promotion of the development of this historical site that Geocon executives love so much. I can see it now, pictures mixing the old with the new. Oh and just to make it legitimate, all designed by a token woman.!

I guess Geocon couldn’t work out how to put a 17-story apartment box on the site.