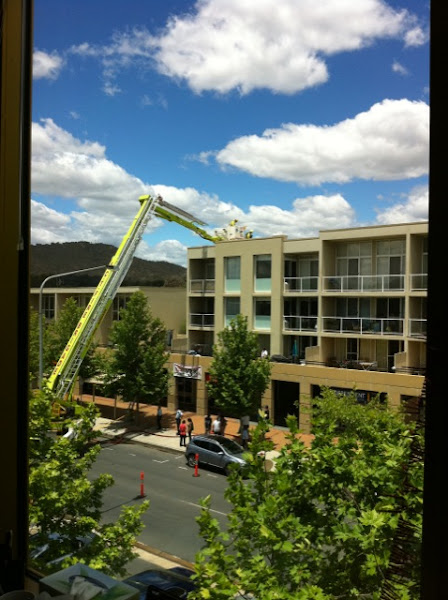 ACT Fire & Rescue on scene at Challis and Cape Streets Dickson at a restaurant fire.

Fire started in kitchen and has been extinguished.

ACT Ambulance Service intensive care paramedics also on scene and have treated one patient for minor burns. Male patient will be taken to the Calvary Hospital.

Approx 80 people have been evacuated from upstairs Coventry apartment complex and surrounding businesses.

Crews continuing to investigate fire spread in roof space, with no fire found in roof at this time.

No fire in roof space at this time.

ACT Fire & Rescue crews are allowing some tenants to return to their businesses and dwellings.

Fire started on a cooktop in the kitchen of the restaurant and deemed accidental.

ACT Fire & Rescue have allowed all residents and nearby tenancies to return to dwellings.

No damage to above apartments.

If you’ve got photos please send them in to images@the-riotact.com .

Just move the Health Dept and Fire brigade to Dickson.

Shane Miller - 11 minutes ago
This is the flow-on effect from such high housing costs in Canberra, so many people are moving out to Yass. View
Jacqueline Bennett - 1 hour ago
And you have to give the tenant 90 days notice. And if they haven't found a place in that time and moved out, then the proces... View
Clarrie Crawford - 2 hours ago
Prior to coVid, government was allowing record immigration. This didn't help the rental crisis across parts of Australia View
Food & Wine 19

Moira Campbell - 1 hour ago
Nicole Fitzgerald this is the place I was telling you about! View
Joanne Trounce - 2 hours ago
Shannon Lee will make sure we do it!🥗🥗 View
Sue Borgo - 3 hours ago
Thanks Sophia- can’t wait to try👍Sounds great! View
Property 21

Colleen Alchin - 2 hours ago
This situation is appalling! Forty minutes from the national capital and you need to buy bottled water to drink and wash clot... View
Tegan Gilchrist - 9 hours ago
Amy LD and the clothes!!! Swapped out all out white sheets for greys. Blazer ruined. I now fill up bottles of water from my p... View
Community 1

Kim Rumble-Kozjak - 3 hours ago
Jacqleequack it was all good fun until the two hour wait in the cab line, in stilettos, without a jacket in -2 🥶❄️ View
News 11

Milenko-Slavenka Jovanovic - 8 hours ago
Penny Ford Djoković is not just one of the other elite players, up to a few days ago, he was voted the players’ representa... View
Margaret Freemantle - 11 hours ago
Rosie Jennings we just don’t know- it would be handy if a copy of the advice was published View
Penny Ford - 12 hours ago
Margaret Freemantle yes that’s true. We don’t really know what he was told. Maybe he didn’t understand but a lot of the... View
News 5

The victim of an attempted bag-snatch outside Belconnen Mall last Sunday (10 January) says her impression of Canberra as a...
Property 24