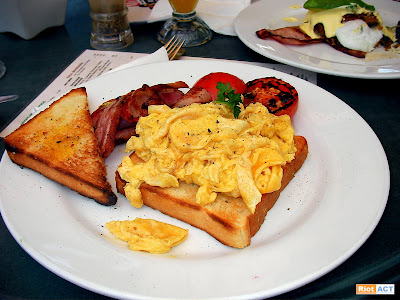 Cafe corner in the Dickson shops is a busy place of a weekend morning. You don’t really choose which of the cafes you eat at, rather taking wherever there’s a spare table with shade.

This means that the cafe which makes the most money is the one which can churn the customers fastest.

We took a seat at Hudsons and enjoyed the talented buskers, playing perhaps a touch too loud.

Ordering at the counter got us a number on a stick and in the time it took to buy a newspaper our drinks had arrived with the food not far behind.

My date’s pumpkin fritters caused her to remark that perhaps pumpkin is not suitable for frittering, although it reportedly tasted fine and the hollandaise sauce was particularly good.

While we were eating our empty glasses were whisked away time is money after all.

The atmosphere is great, but in my opinion there are better breakfasts to be had for the money elsewhere.

Caveat Pumpkin Fritter-Eater. If you’re going to order such a horrendous concoction, you get all you deserve.

Dare I say, you get your just desserts?!

As for ‘order and pay at the counter’, any seasoned (no pun intended) eater-outer should know that this will vary from place to place. If in doubt, ask.

For example, I hadn’t been to Café Essen for ages, so when I stopped in this morning for a superb long black Organic New Guinea, I stepped up to the counter and asked pleasantly what the go was. ‘Sit down and we’ll be right with you’ was the response, and the service and the coffee and the atmosphere was grand.

Slightly more disappointing is the (lack of) regard for customers shown by one of my regular haunts, Bardelis. Last week they were doing some sort of re-furbing, but today the door was shut with no sign nor hint of when or if they will/might be open.

The risk: punters like me find somewhere else for the day, and possibly more permanently.

Hudson’s breakfast is quite ordinary. I’ve had the pumpkin fritters and they were dry and tasteless. And ‘order and pay at the counter’ is fine if you’re a local and know the drill. For my money, Cafe Prego next door does a far better and more interesting breakfast with unique ingredients, and it’s less crowded and more shaded. I will write a review tomorrow and post a pic perhaps.

Or a purloined, secretive photograph of a secondary breakfast that fits the “bill” !!

I love their bread. It tastes like the homemade bread my dad used to bake sometimes. It was such a treat to go there, but I have been disappointed the last couple of times and not been back. I am a simple woman. A nice muggacino or a latte can completely make my day.

That’s a shame, too, Granny. I lurve Deeks’s savoury muffins and their coffee is pretty much universally brilliant (or was). AND the Canadian server/waitress/possible manager or has some interest in it is (sigh!) a brilliant PR person for the place, the products and the ‘je ne sais quoi’. I dithered this morning about going to Deeks or Hudsons but was keen to do a comparative study after the OP.

I used to go to Hudsons, but I had too many bad experiences once they changed hands. I was going to Deeks instead, but even they seem to have deteriorated recently.

Ah no, peterh. I’d say at a guess that their clientele are not likely to be Rioters, nor would the owners be the sort to jump on and e-defend themselves.

what i am interested in knowing is why hudsons dickson hasn’t waded in to RA to defend themselves? nearly every cafe or pub / bar / club that gets a mention on RA seems to find a computer from somewhere and make a comment.

I prefer my virgins young and beautiful … therefore that pretty much rules you men out.

That’s how I look when I haven’t sucked the life essence from young virgins, peterh!

In between fixes as it were ….

that’s me pretty well safe, then. growing up in charny sorted that out pretty quick…
and I am in no way young…

Good thing I lost my V plates a while back eh ?

Me and my Type 0 Negative are safe…for now….

That’s how I look when I haven’t sucked the life essence from young virgins, peterh!

In between fixes as it were ….

Grumble. I’ll try to paste the url again (the code here is bizarre).

you know, that looks nothing like granny! The other granny on the link is waaay too old.

In dire need of sustenance this morning (and to get out of ‘Dodge’) I jumped in the car, told it to drive and find me breakfast, and I wound up outside Hudsons at Dickson. Well, I parked near the ANZ — parking outside Hudsons might attract the attention of the authorities and insurance companies.

Anyhoo, the older serving bloke who’s normally there wasn’t, which is a shame as he has the best ‘Good morning/afternoon, how are you?’ smile in the business. But I still got prompt, friendly service and the ‘Delish’ breakfast was superb: scrambled eggs with diced tomato and onion and thick-sliced mushrooms on a Turkish roll.

The mushrooms could have been pan-fried, and the coffee was good without being great. Overall, good value for money. Unfortunately the weather was not conducive to sitting outside, and I can only stay in a noisy inside atmosphere with its attendant noises for so long before my ears turn on me. So not the place to linger longer. Sitting outside when it’s fair weather is great value.

I’ve sent a pic through for JB to add above if he wants.

Granny, there’s a show about you on tomorrow night:

It looks extremely inspirational! And quite coincidental that I may be hashing on Wednesday ….

I will try not to miss it!

Grumble. I’ll try to paste the url again (the code here is bizarre).

Granny, there’s a show about you on tomorrow night:

Ok. But you have to cook the results!

Mikey Moore - 32 minutes ago
Veronika Sain gotta disagree with you. Besides the aforementioned reasons ensuring water quality would have also been a night... View
Stu Cook - 21 hours ago
Veronika Sain of course it was Veronica. I note you didn’t acknowledge or engage with a single word that Mikey said, becaus... View
Veronika Sain - 23 hours ago
It was a mistake to abandon it. And their prediction of consistent small water flows because there was a drought at that time... View
News 19

Max Robinson - 35 minutes ago
Great. When ANU does this there shall be no more bushfires. Right? View
Peter Robinson - 6 hours ago
Steve Jones , yeah I'm also loving the diesel powered generators to charge the Green electric cars starting to pop up around... View
Kuan Bartel - 6 hours ago
You mean they still had investments in coal and fossil fuels? They should be ashamed and apologising for their actions, not p... View
News 164

JC - 3 hours ago
Stated capacity of the Canberra light rail vehicles according to CAF who make them is 276. I’ve rounded up to the nearest 1... View
chewy14 - 21 hours ago
JC, Stated capacity for the light rail is 238. The new articulated buses carry 109. So for them, it's only around 2 to 1, so... View
Tamsin Walkden - 1 day ago
Lorraine Welling Well said. View
Property 53

Brindie - 4 hours ago
Another example of developers pushing large, ugly apartment blocks. Despite the community views, the shoddy ACT government wi... View
Grant Stevens - 8 hours ago
In between the world's worst pollution levels,thanks to the bushfires View
Sport 3

noid - 1 day ago
Would love to move away from coal but when you look at our top 3 exports, see below, I would like to see some ideas on how we... View
HiddenDragon - 1 day ago
“You need to find a way to provide other opportunities to those communities as they transition out of those industries.”... View
News 1

Canberra Airport is expecting to clinch direct connections to China, New Zealand and Vanuatu within the next eight years and...
News 0

A man who allegedly took a car with a 14-month-old child in the back seat and assaulted the mother in Wanniassa...
News 5

The bikie gang threat in the ACT is exaggerated, according to a new report released yesterday by Attorney-General Gordon Ramsay which...
News 19

It's thirsty work being a dog with all of that walking and sniffing to do. So now Canberra's canines will...

@The_RiotACT @The_RiotACT
While we don't know for sure how Namadgi's lyrebirds have fared following recent bushfires, Ian Fraser is optimistic they've survived to sing another day https://t.co/lNJajy7CB4 (3 hours ago)