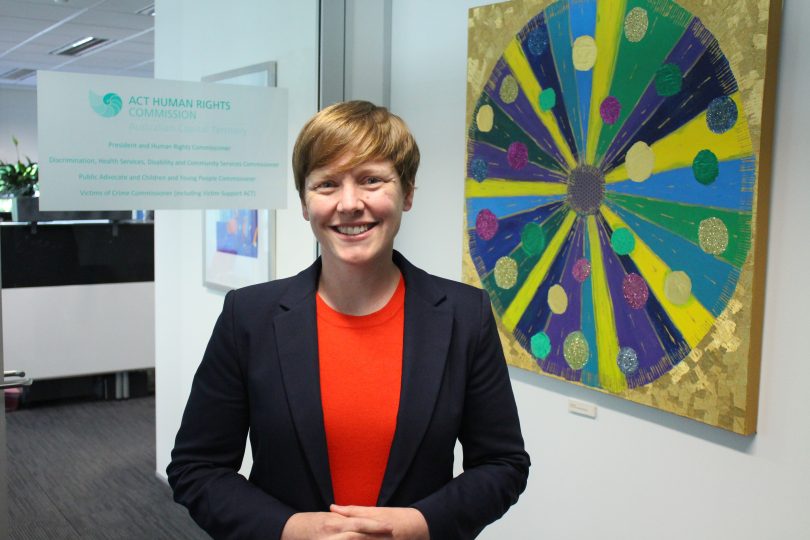 Shifts in ACT crime figures that show a general downward trend in crime but a rise in sexual assault figures in some areas may have more to it than meets the eye.

42,451 total offences were recorded in 2018, an annual fall of 12.7 per cent. This puts crime levels at their lowest since 2014, although the figures also show a spike of more than 30 per cent in Tuggeranong for reported sexual assault.

But the word “reported” is the key here, according to the ACT’s Victims of Crime Commissioner Heidi Yates, who is also a solicitor and has been a longtime advocate for family violence law reform.

“The dynamics of interpersonal violence when offenders are known makes things much more complicated. People often don’t come forward with reports of sexual assault when it’s someone you know and trust,” she says, adding that where the victim is a child or young person or cognitively impaired, and the perpetrator is a trusted adult, “they don’t have radar to measure those activities, they don’t know its a crime”.

Yates says that the shame and stigma associated with being the victim of sexual or family violence can still often make it very hard for victims to come forward. Changing figures on rates of sexual assault can be an indication that community standards and expectations about disclosure are changing and support measures are working, so that people identify crimes and feel safer reporting them.

Yates says that in her early days as a legal aid lawyer, people would often deny experiencing violence before confirming that they had been held in a room against their will, pinched or hit. “Psychological and financial abuse, in particular, is not always easy to identify. There might be coercive, controlling behaviours, and perpetrators using violence will often design situations to make their victims doubt themselves and think they’re crazy.”

Yates says that two out five people still don’t know where to go for help when they have experienced family violence or sexual assault, often happening at the same time. Victims, she says, are often most worried about how they and their children will survive on their own if the perpetrator is paying the bills.

But equally, not everyone necessarily wants to leave their relationship: local analysis from the ACT’s Co-ordinator General for Family Safety shows that many simply want the violence and abuse to stop. “We need to give people options, let them know they can reach out on a confidential basis and that they won’t be pressured to report the abuse,” Yates says. “Safety planning is crucial, but we also need to support people with the everyday realities of life and counter the myths that you won’t be believed.”

Across the Territory, the biggest decrease in crime figures was in the property damage category. There were 18 per cent fewer offences this year, while burglaries also dropped by close to 18 per cent, and there were fewer thefts, assaults and robberies. Even traffic infringements decreased by 14.5 per cent.

Homicides were down 14.3 per cent on last year, but those figures are always compromised by the low rate of offending: there were six reported homicides in 2018, and seven in 2017. Similarly, while a greater number of crimes were committed in Belconnen than anywhere else, it’s also the city’s largest population centre.

Click here for more information, resources, and where to report sexual assault in the ACT.

Why would the massive spike in sexual assaults for Tuggeranong, be due to people in Tuggeranong being more confident in reporting these terrible acts? Why would Tuggeranong women's attitudes be so different to the rest of Canberra? My more likely guess for these sickening results would be a lack of criminal deterrents in the South of Canberra. Surely the obvious answer is the need for the Tuggeranong police to focus on Motorcycle gangs and the resulting reduction in local police focus on crime, speeding, assault etc in Tuggeranong. I never see Police on the beat in Tuggeranong any more but I keep seeing news stories on crime spikes.

Dan Cope - 29 minutes ago
👏 well done Emma. View
Alexandra Mary - 1 hour ago
Jaimie-Lee Peattie it is! So awesome to see more being set up View
Montana ONeill - 2 hours ago
This is good to see and hopefully it grows throughout the region to other areas💙 View
Opinion 51

New details about the Woden CIT precinct and public transport interchange project have been released, as the ACT Government opens consultation...
News 36

@the_riotact @The_RiotACT
The last #terrace homes have been released at The #Parks development in Red Hill https://t.co/LUfvmlEWVT (3 hours ago)