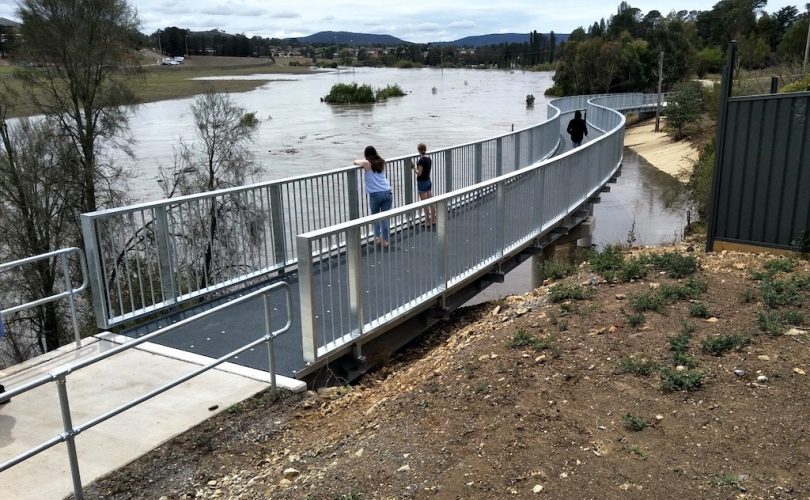 Prolific rail author and photographer Leon Oberg has been capturing the progress of Goulburn’s river walkways through his lens. Photo: Leon Oberg.

Except for a brief passing view from bridges, both the Wollondilly River and Mulwaree River in Goulburn were buried behind willows and weeds for many years.

A visionary network of walkway recently began uncovering and accompanying these silver streams through the town. Since 2016, Goulburn Mulwaree Council has spent $5.7 million on 10km of walkways, drawing hundreds of people alongside the picturesque waterways daily.

The new paths have been busier during COVID-19 social distancing as residents look to get outside to exercise. Seating, rubbish bins and public artworks are being installed in key locations. Residents are riding their bikes, walking their dogs, pushing prams, launching drones high above the landscape to capture the new work, and reminiscing about favourite swimming holes such as ‘The Rock’ from decades ago.

A further $550,000 is budgeted for the project in 2020-2021, and in future years Goulburn Mulwaree Council will look to extend the walkway towards the historic Boathouse and Joseph’s Gate residential development along the Wollondilly River. 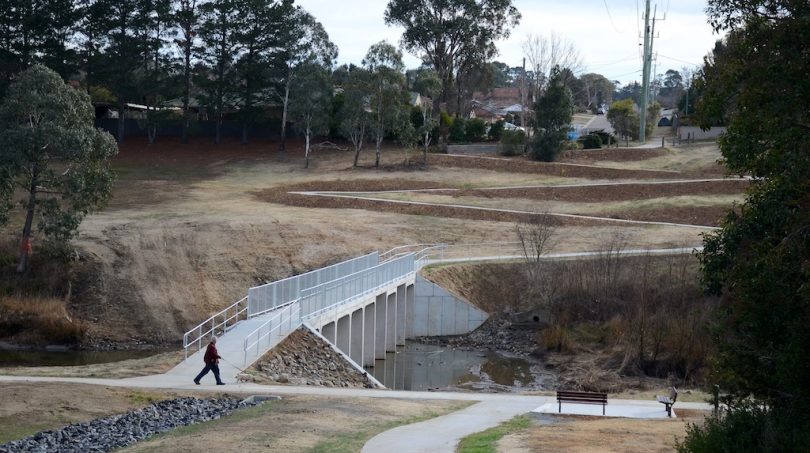 Waste management charges are set to rise 7.5 per cent in the next financial year. The council is planning a major upgrade of Goulburn Waste Management Centre as it continues to reduce reliance on landfill and encourage recycling.

The water availability charge and water consumption charge will each rise 0.25 per cent, with the equivalent increases for sewerage and sewerage consumption also proposed in the plan.

Goulburn Mulwaree Council’s general rates, which are pegged by the NSW Government at 2.6 per cent, will yield $21.393 million. The council says its fees for waste and water remain some of the lowest in regional NSW, and its general rating yield is again pegged at 2.6 per cent, meaning council’s overall yield from rates must not increase by more than 2.6 per cent.

Much of the council’s focus will be on delivering the $20 million Goulburn Performing Arts Centre and $30 million redevelopment of Goulburn Aquatic Centre. Council general manager Warwick Bennett says both projects are part of the most ambitious four-year delivery program ever put forward for Goulburn Mulwaree.

“We are excited to be underway with construction of the Goulburn Performing Arts Centre, with work also to begin on the Goulburn Aquatic Centre redevelopment in September,” said Mr Bennett. “Council will also continue to focus on key infrastructure for our rural communities, such as the Marulan Wastewater Treatment Plant.” 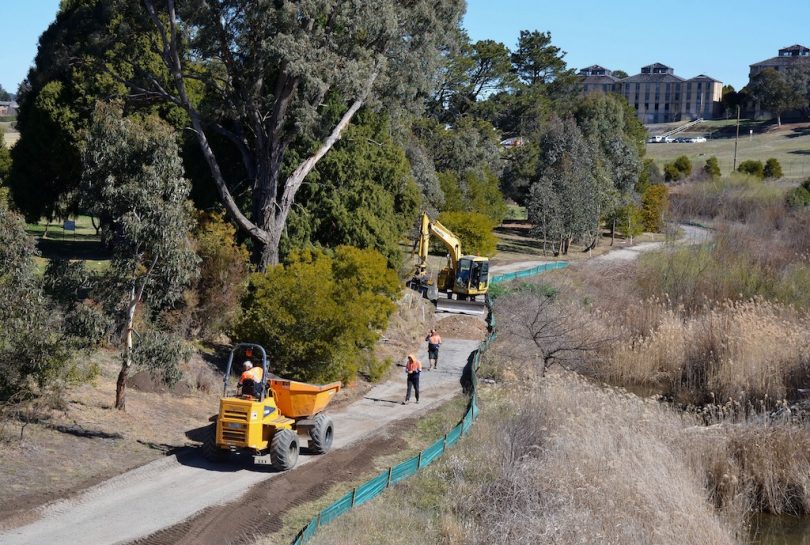 Construction between Tully Park golf course and the Wollondilly River, with the NSW Police Academy in the background. Photo: Leon Oberg.

He said rural roads are also on the agenda, with the short-term focus on Mountain Ash, Windellama and Taralga roads.

In the long-term, the walkways should link to another ambitious project, a rail trail from Goulburn to Crookwell. Council has completed a $16 million grant application for the trail proposal, which supports the retention and re-use of all the large timber bridges and the steel bridge over the Wollondilly River at Goulburn.

The refurbishment, or replacement, of bridges is one of the most costly items in any rail trail development, however it is the old bridges that are appealing to potential rail trail users.

Stephen Saunders - 58 minutes ago
Mr Anderson, it is laughable to quote a skewed “survey” of punters already visiting AWM. Ms Barnes, as ever, a puppet. Ga... View
Property 1

CraigFromCurtin - 7 hours ago
ACT Policing, like most (all?) police jurisdictions in Australia, give up pursuits far too easily. The crims know exactly wha... View
News 1

Lauren Kay - 12 hours ago
I was gutted when I found out Ash. Nigel was so lovely and it feels like I knew him forever. View
Ashleigh McHugh - 12 hours ago
Lauren Kay isn’t it so sad... View
Lauren Kay - 13 hours ago
Drew Forrest I've got a condolence card, but happy to put more cards in a larger envelope if you or anyone up your way wants... View
News 13

@The_RiotACT @The_RiotACT
Loveable goofball Rocco and sweet rabbit Waffle are waiting to find their perfect match. Think that could be you? @rspcaact #PetsoftheWeek https://t.co/RqlUzgo7Dg (13 hours ago)