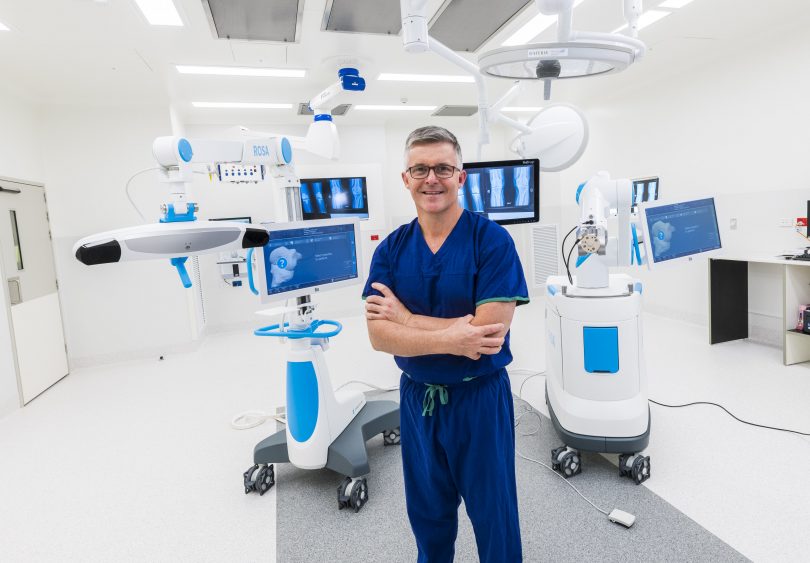 Dr Brendan Klar from Canberra Knee Clinic is the first surgeon in the ACT to be trained in the use and application of the ROSA system. Photos: Supplied.

Doctors at the National Capital Private Hospital now have a new helping hand for knee replacement surgery with the arrival of a new robot knee surgeon called ROSA.

Last Saturday (11 May) was hailed as the day that “changed the surgical landscape in Canberra” as Dr Brendan Klar performed Canberra’s first robotic total knee replacement with the assistance of ROSA at National Capital Private Hospital.

ROSA did not perform the surgery directly but assisted Dr Klar by holding the tools in place, providing real-time 3D models of the patient’s knee and helping Dr Klar make submillimetric accuracy.

The National Capital Private Hospital unveiled its new robot knee surgeon to the public on Tuesday (14 May) along with the success story of 61-year-old Beverly Webb, who was the first person to undergo the surgery in the ACT. 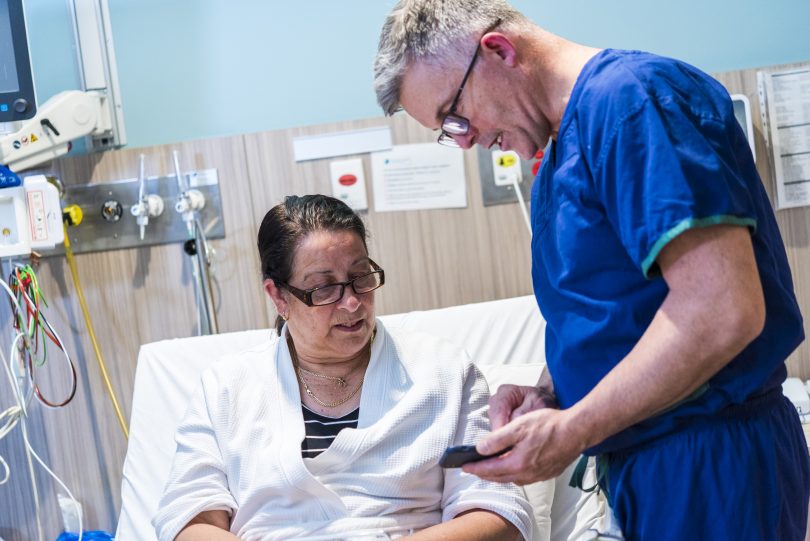 Beverly Webb was the first person to undergo robotic total knee replacement surgery in the ACT.

Dr Klar, who has performed thousands of total knee replacement surgeries since 1994 and is the first surgeon in the ACT to be trained to use ROSA, said last Saturday was a day he had dreamed about.

“Introducing the ROSA robot into my procedures is one of those moments that surgeons only used to dream about,” he said with a smile.

“To be the first surgeon in Canberra to perform a total knee replacement using ROSA is exciting not only for me, but for the whole surgical team in the operating theatre, and for our patient, Beverly, who was excited to be the first on the list when ROSA arrived in Canberra.

“We brought the future directly into the theatre.” 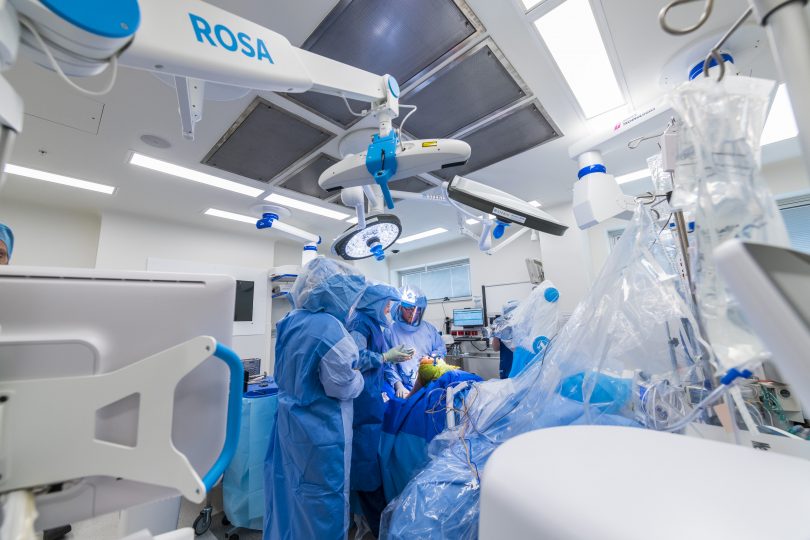 Dr Klar said the accuracy of the surgery under the knife of the robot will hopefully reduce the potential for recurring problems for patients, improve recovery time and achieve consistent results that the human hand and eye together likely can’t match.

Dr Klar said while your average human surgeon might not pick up the fact that the patient’s knee had moved one millimetre, ROSA does, and this tiny change could make a huge difference to a patient’s outcome.

When asked if he was worried about losing his job to the impressive technology, Dr Klar laughed.

“A robot is a tool to enhance the skills honed by expert surgeons through decades of practice,” he said.

“I still perform the surgery but ROSA ensures the accuracy of what we do. With Australians requesting knee replacements at an all-time high, it is extremely exciting to be able to make this technology available to our patients.” 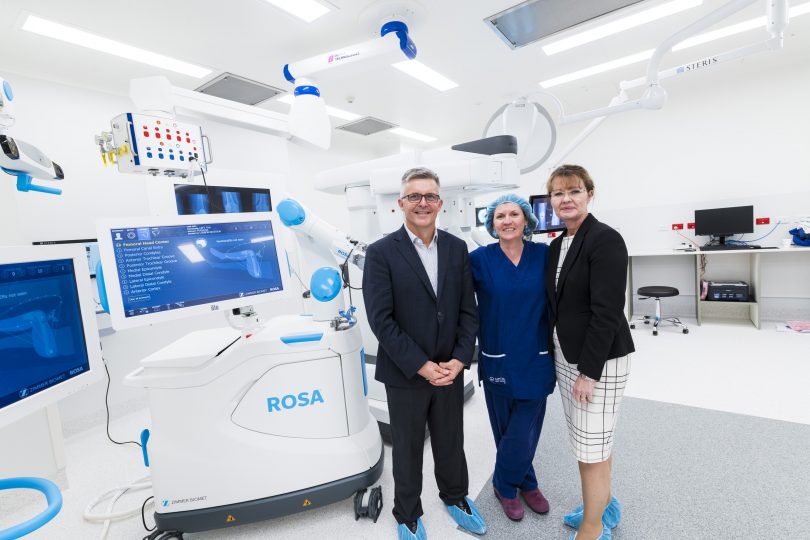 Initially developed for brain surgery in France, the ROSA robot has been used globally and arrived in Canberra as part of a multi-robot acquisition by National Capital Private Hospital.

“The acquisition of the ROSA system, along with a da Vinci robot and the Mako systems, is a continuation of our multi-million-dollar investment and will contribute to making the hospital a robotic centre of surgical excellence in the ACT and southern New South Wales region,” she said.

“Australia has been fortunate to be the first market to gain access to the exciting ROSA technology.

“The engagement of robotics in the surgical process, combined with innovations in implant technology and operating procedures, will likely improve accuracy in total knee replacements, potentially improving postoperative outcomes for patients and getting them back on their feet as soon as possible.

“This is a real game-changer in Canberra.”

JC - 28 minutes ago
There not demolishing more than they build/buy. Biggest issue is they are not building/buying enough to keep up with demand.... View
consumeradvocatecanberra - 3 hours ago
Good on you Mark for stating the bleedingly obvious. What I would like to see is evidence based figures from Housing, prefera... View
Trish Casey - 4 hours ago
Elderly people and those with disabilities are put in ACT Government house and then for gotten or bullied by maintenance View
News 2

Capital Retro - 11 hours ago
David Ward, when you say "there should be massive incentives to buy and own these things" you really mean "subsidies" don't y... View
Opinion 66

Julie Macklin - 16 hours ago
Linda Stapleton I rode to work in the rain. I had wet weather gear to wear. Well, I did until into my 50s. Then I began to ta... View
Stephen Harris - 20 hours ago
Julian Hayes thenif it increases their costs but not their profits then they will stop doing what they are doing and do it di... View
Food & Wine 3

Why this Canberra surgeon uses robotics for joint replacement surgery

@The_RiotACT @The_RiotACT
A major landslide on a regional road between Moruya and Braidwood, in southeast NSW, has virtually landlocked residents, including health professionals who work in Canberra and farmers who rely on Sydney markets to sell their produce https://t.co/GlU9KD5e97 (19 minutes ago)

@The_RiotACT @The_RiotACT
Access Recycling is reassessing its future in Fyshwick and may move to Goulburn in the wake of legislation blocking its proposal https://t.co/e59RVT1RYZ (48 minutes ago)