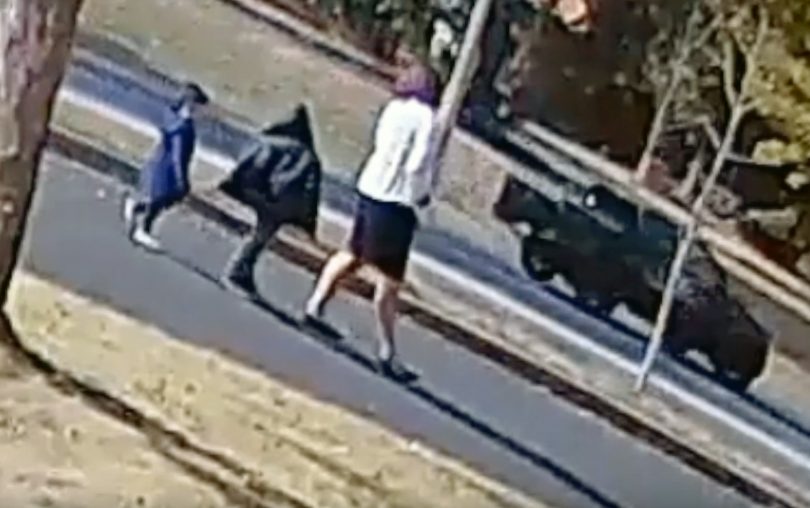 Screen grab of CCTV footage of Safa Annour walking with a woman the day before she died. Supplied by ACT Policing.

Police have released CCTV footage of two-year-old Safa Annour with an unknown woman the day before the toddler was murdered as police continue their investigation into the cause of her death.

Around 1:50 pm on 30 April 2018, Safa was taken to Canberra Hospital where she died a short time later. A post-mortem examination found the child died from blunt force trauma and fatal internal bleeding, which were caused by another person.

ACT Policing has released new CCTV footage of Safa the day before she died as police look to identify the woman walking with the toddler on Sunday 29 April 2018 in the area of Sturt Avenue, Narrabundah.

Police said the woman is not a suspect, but believe she may be able to provide information about Safa in the days before she died.

Two weeks ago, police released footage of Safa on the day she died, with Transport Canberra bus footage taken around 8:40 am in Stuart Street, Griffith showing the child uninjured and waving happily to the bus driver.

Police said they have identified two people responsible for Safa’s care during the time she was suspected to have received her fatal injuries, but would not say what relationship these people had with Safa.

Police believe there are people in the community who have information relating to Safa’s murder, and they are calling for anyone with information surrounding her death to come forward.

Police are investigating the murder of a two-year-old girl Safa Annour, who died in April this year as a result of blunt force trauma and internal bleeding.ACT Policing believes there are people in the community who have information relating to Safa’s murder and are asking anyone with information about the toddler’s death to come forward.Anyone who may have any information that could assist police can contact the investigators directly on 0427 598 207, Crime Stoppers on 1800 333 000, or via the Crime Stoppers ACT website.Read the full story here – ow.ly/eYW230msaNW

Acton - 5 hours ago
Another stunning achievement for the incompetent Greens/Labor ACT government. Along with the highest rates increases, the lon... View
News 72

HiddenDragon - 6 hours ago
Much of the progressive agenda being pursued by the ACT government is fairly standard stuff - not just the ideas, but the arg... View
Ray Polglaze - 14 hours ago
Martyn Tweedie, And so what would your view be of the Federal Labor Party in December 1968? What would the evidence show? By... View
Martyn Tweedie - 15 hours ago
Ray Polglaze my sincerest apologies. "Re-elected" then. View
Food & Wine 19