Scouts’ honour raises $100,000 for the homeless and vulnerable 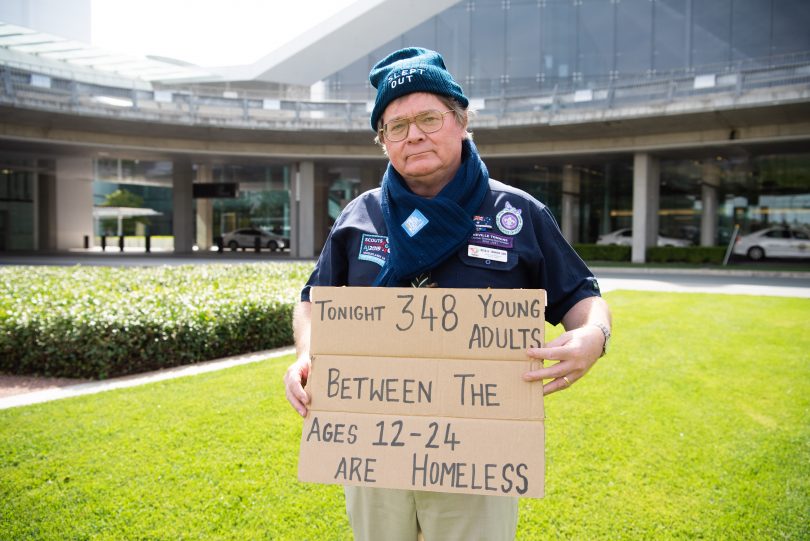 Scouts Chief Commissioner Neville Tompkins is inspired to continue fundraising by his own childhood. Photo: Supplied.

When Neville Tompkins settles down for his ninth St Vincent de Paul CEO sleepout this Thursday (20 June), he does so with memories that stretch back to his own childhood.

The Chief Commissioner of Scouts in NSW (and the ACT’s honorary Chief Commissioner) is a deeply familiar figure to anyone who’s ever had a kid in Canberra Scouts, and was a senior public servant before his retirement.

But well before that, the gently spoken Tompkins was all too familiar with what poverty feels like in the hard midwinter. One of nine children, he grew up in Warwick, on the Darling Downs. It was a close family but one with very few material goods indeed.

“I had five sisters, and in my childhood, there was no such thing as girls’ or boys’ clothes or shoes,” he recalls. “You took what you got and were grateful to have anything.”

As a student, Tompkins knew hunger, living below the poverty line in his first years at university. His later experiences as a senior figure in the international Scouting movement showed him what dire need looks like in developing nations.

It made a powerful impact on a man whose life was already dedicated to public service and community, and eight years ago, Tompkins set himself a target for the St Vincent de Paul CEO sleepout. Never one to do things by halves, he aimed for $100,000 – and now, he’s done it. As of this week, he has personally raised $101,300.

Neville says he was directly inspired by the story of a homeless single mother and children sleeping in their car in the middle of Canberra’s winter who were struggling to afford food, let alone keep the car running to stay warm.

“Not only did Vinnies support that family with emergency accommodation and meals, but their Clemente program helped the mother to complete her university studies. She is now in full-time employment and secure rented accommodation. Vinnies gave this family, including the two young children, hope for the future.”

“We are so grateful for Neville, and people like him, who return year after year to the CEO Sleepout to raise money for Vinnies. His fundraising efforts have made a massive difference in the lives of so many Canberrans. We thank him for his commitment to continue raising awareness of poverty and homelessness,” said Barnie van Wyk, CEO of St Vincent de Paul Society Canberra/Goulburn.

And Neville will be there this year too, his life busier than ever after his retirement several years ago. “When I reached that magical age in the public service of 54 and 11 months and the super was beckoning, I thought right, time to really do some good for people if I can,” he says.

The next plan is to set a new fundraising goal and Neville says he’ll be braving the chill as long as his health can sustain it.

After eight sleepouts he has some experience to offer to fellow CEOs who might be a little softer. Neville reckons although grass can be wet, the earth is nevertheless warmer than concrete. He says one of the coldest nights of his life was in 2015 when the sleepout took place on the concrete outside Questacon within spitting distance of the lake.

The Vinnies CEO Sleepout raises funds so Vinnies can continue to assist those at risk of or experiencing homelessness, and continue to expand services designed to break the cycle of poverty. This year Vinnies Canberra/Goulburn aims to raise $700,000 through the event. Currently, the 173 participants have raised $345,064.

The CEO Sleepout event will be held on Thursday, 20 June at Hangar 47 at Canberra Airport. You can make a donation to the Vinnies winter appeal here

Lachlan Johnstone - 16 minutes ago
Shane Cairney so if it were your home would you want the agent to get the highest price possible?... View
Tim Gardner - 4 hours ago
Agents are not being fair in this current market, I know of 2 sales in 2 weeks that the asking price was accepted, then the a... View
James Watt - 7 hours ago
Joel Suryawanshi if you were selling your house, wouldn’t you want your agent to maximise your sale price? Not sure why the... View
Motoring 30

whatwik - 1 hour ago
Shock, horror! - it's true! The NSW Liberal Party wants "to charge up the Nation and make NSW the Norway of Australia when it... View
Capital Retro - 4 hours ago
Still waiting for the details of those mythical fossil fuel subsidies. View
Lifestyle 11

Capital Retro - 3 hours ago
Indeed, 29% were made in China one recent month and most of those went to Europe. Most other EV brands are made in China. If... View
Capital Retro - 4 hours ago
If a diesel engine needs an operating temperature of up to 600 degrees to "clean it up", why do they all now come with Diesel... View
Ol L - 5 hours ago
Tesla’s for one are Chinese made. A luxury car tax on a Chinese car? Please…… View
News 1

Barbara Boswell - 4 hours ago
Have a bus (LR) licence, can I be of help ???? View
Dinora Collins - 6 hours ago
This is a great interim measure we need public housing for women and children every night in Canberra. View
Community 44

Capital Crime Files - 4 hours ago
Sam Warry and wrote about and had an event last year to mark the 80th anniversary of the air disaster. https://www.google.com... View
Lyn Tutt - 5 hours ago
Rayleen Jordon not a helicopter some random light View
Sam Warry - 7 hours ago
Capital Crime Files has done an amazing job at telling the sad story of Keren Rowland. Also goes into amazing detail describi... View
News 1

consumeradvocatecanberra - 4 hours ago
I am a Vietnam Vet and spent 40 years in Defence. I try to keep abreast of the mumbo jumbo that is coming from the Government... View
Community 2