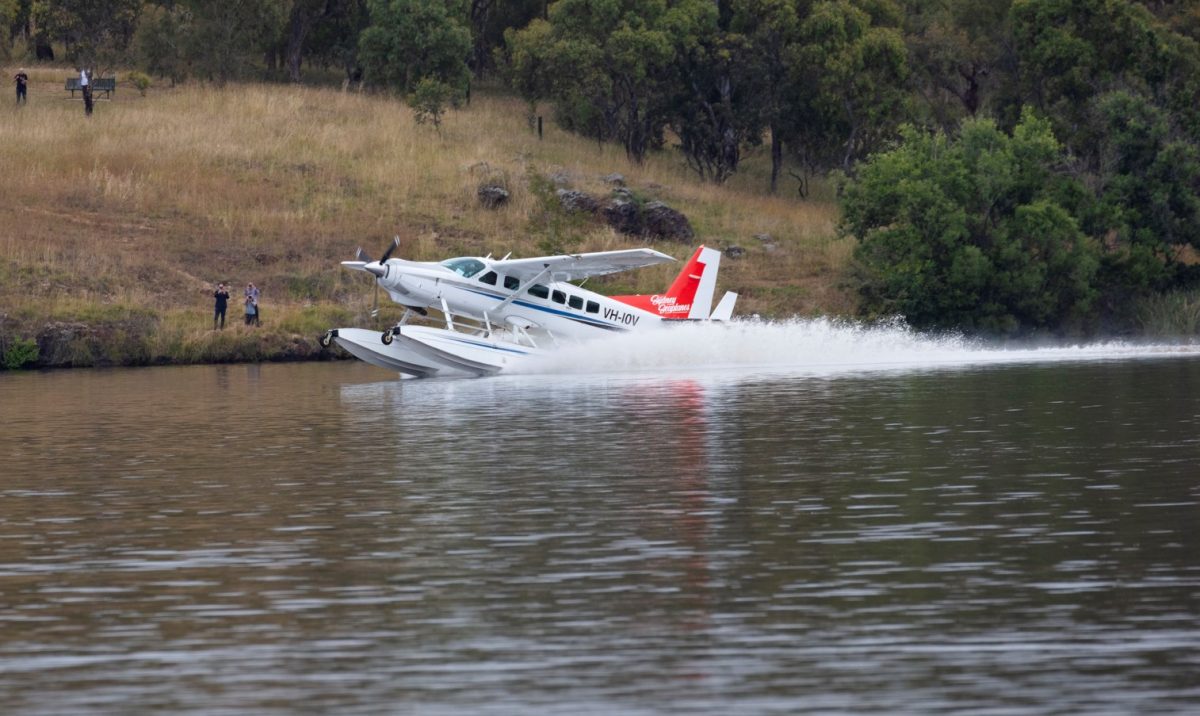 The proposed seaplane service to Canberra is set to become all-electric after the company involved signed a strategic partnership with regional airline Rex to pioneer the conversion of turbine powered aircraft to zero-emission propulsion.

Sydney Seaplanes company Dovetail Electric and Rex plan to develop and certify the retrofitting of electric engines on to legacy aircraft, initially for regional and general aviation use.

Dovetail was formed last year by Sydney Aviation Holdings, owners of Sydney Seaplanes and Dante Aeronautical, a start-up pioneering disruptive electric aviation concepts with a presence in Spain and Australia.

Aircraft will be converted using MagniX engines for which Dovetail is the exclusive distributor in Australia, New Zealand, the South Pacific and Mediterranean Europe.

They are expected to be 30-40 per cent quieter than their donor planes, a selling point for operating on the lake, and 40 per cent cheaper to run.

The propulsion system will integrate the electric motor, battery packs and hydrogen fuel cells into one ‘drive-train’ on an existing airframe. 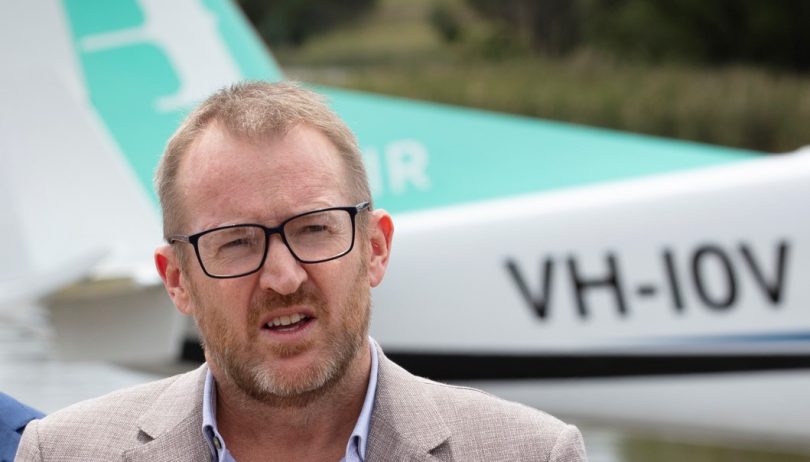 Sydney Seaplanes’ Aaron Shaw: “Our vision is to lead regional aviation across the world into an exciting, new sustainable era. Photo: Thomas Lucraft.

The partners believe conversion of turbine aircraft to electric propulsion promises to bring zero-emissions aviation into the mainstream much faster and more cost effectively than via newly commissioned electrical planes.

Dovetail expects to achieve certification for converted aircraft within four years, compared with more than eight to 10 years for new electric aircraft, and at a fraction of the certification costs.

Rex will provide a test aircraft for the project and support facilities including engineering and technical assistance, maintenance, repair and overhaul support as well as storage facilities and workforce accommodation.

Sydney Aviation Holdings CEO Aaron Shaw said the initiative promised to put Australia on the map as a global leader in the conversion, certification, and maintenance of electric aircraft.

“For the first commercial electric flight to occur on such an historically important aviation site as Rose Bay just adds to our enthusiasm for this groundbreaking project,” he said.

“Our vision is to lead regional aviation across the world into an exciting, new sustainable era before leveraging the IP, approvals and facilities we establish into larger aircraft and longer flights as improvements in electric propulsion technology enable.”

Rex Deputy Chair John Sharp said the airline was excited to be at the forefront of developments in sustainable regional aviation and helping national efforts in achieving the target of net zero emissions by 2050.

“Australia, with its very high utilisation of regional aviation and large number of aircraft capable of conversion, is a perfect incubator for the electric aviation industry,” he said.

“Dovetail promises to deliver the holy grail in aviation: true sustainability; lower maintenance and operating costs and also less waste as a function of the reuse of existing aircraft.”

The National Capital Authority gave qualified backing to the seaplane proposal last December and is conducting further work – including lake user guidelines, infrastructure needs and licensing conditions to protect heritage values – before making a final decision in the last quarter of 2022.

The seaplanes proposal has been controversial with most consultation submissions opposed to the idea, although the ACT Government and the tourism industry have been supportive.

It will only take one water-bird strike to bring it all undone.

What a great idea it will appeal to some but not all, if it works excellent the only thing i am a bit dodgy about is the electric plane,call me old school and i havent quite grasped the electric thing yet.Maybe one day thats my opinion good luck rex.

Why are people laughing? This is great achievement.
Efing 💩 people

So high speed rail between Canberra and Sydney is not do-able but some niche thing is ? I can see our government signing off on that.

I might have missed this, but why does there need to be a plane service between Rose Bay and LBG? Assuming the ACT Govt will be contributing some of my (and other ACT residents) funds towards this, I’d like to see a definitive cost benefit analysis.

That’s a great development – it will be aircraft of this size where electric flights begin. Personally looking forward to trying this service to Sydney.

How will an electric plane be quiet? Isn’t most of the sound from the propeller throwing air around?

Well it is with piston engine aircraft but remember there is a lot of sophistry with renewable technology.

Even with all their streamlining, sailplanes make more noise the faster they go.

Still needs to be away from the sailing area.

Dreadful idea. Can you imagine the clientele flying from Rose Bay to Sydney? Next thing the wealthy will want to fly their own in. The Lake should be for everybody.

Can you imagine also the clientele flying from Canberra to Rose Bay?

Matt Allan no, I don’t want it dominated by only those that can afford it. There’s a perfectly good airport not far away.

Alex Rea so it’s only for poor people? Make up your mind

Alex Rea I hope it does

Matt Allan you probably have a jet ski too

Not happy as I sail on that lake. Too risky having an airport on a major sailing lake. What’s wrong with the airport near RAAF base?

From the article: ‘Sydney Seaplanes-owned Alt Air wants to provide commercial seaplanes services between Lake Burley Griffin and Rose Bay, Sydney.’ But does the population of Canberra want it? Not the politicians, but the people! 65% of the respondents to the public consultation by the NCA that closed in June last year rejected the idea, yet the NCA seems to be ignoring the wishes of residents.

The 65%, aka the membership base of the Lake Guardians, who seem to want to suck the fun out of Canberra for everyone below the age of 70?

Ignoring the wishes of the lake guardians who screamed the loudest from their aged care facilities, you mean.

No-one has yet fully explained about the attractiveness – for Sydney people – of the planes taking off from and landing back at Rose Bay.

It is nowhere near the CBD and would require additional trips by (e.g.) ferry, taxi, bus, Uber or private car. Road trips would require travel along a very busy New South Head Road.

Gosh, that sounds terrible. I guess there must currently be no seaplane trips to anywhere out of Rose Bay then?

What on earth are you on about? Do you really think people who live in Sydney are unaccustomed to living in Sydney, rush back inside in fright after looking out the front door?

I am not keen on the general idea, by the way, but that is largely self-interest..

8 min ferry to Circular Quay, departing every 15 mins. What a pleasure.

Before EVangelists get over excited, the Li-ion batteries in a prototype electric plane caught fire in January 2020.
https://www.flightglobal.com/airframers/eviation-alice-fire-involved-lithium-ion-batteries-which-ignited-after-hours-of-powerplant-tests/141228.article

Every other day there’s an article about ACT Labor/Greens stupidity but you all keep voting for them, why???

some of us didn’t vote for them……

what if the extension cord snags ??

Simon Gadgets it’s ok. The ACT Government will make it a condition that they have solar panels attached to the wings.

If we get electric Jetskis, can we put them on the lake?

This isn’t going to help community usage of LBG.
Snow family built a big airport 5 km away. Use that.

Steve Ulr It will help the insanely wealthy community who want to pretend LBG is Canberra’s equivalent of Rose Bay.

The noise from airplanes isn’t from the engine 🤦‍♂️