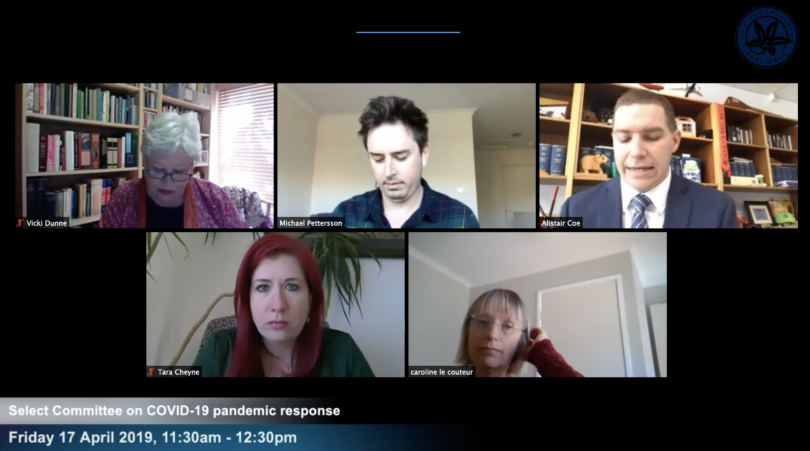 Mr Barr and Under Treasurer David Nicol dialled into the committee hearing – which was being conducted over Zoom – but did not use the video function, citing security concerns with the popular video-conferencing app.

Zoom has been assessed as an inappropriate method for Ministers and ACT Government officials to be presenting evidence, a government spokesperson said.

“As Zoom is not a supported ACT Government application, the government would have no oversight as to how the service was being accessed and utilised and to what level of password protection users had undertaken to set up their accounts,” the spokesperson said.

“Even following basic security precautions such as using password protection, use of a waiting room, tracking and locking meeting attendance and the creation of Zoom accounts using non-ACT system identification or passwords does not diminish the risk.

“The ACT Government provides staff with suitable alternative enterprise software for web conferencing: Cisco Webex and Microsoft Teams. These products have been security assessed as being suitable for use for official purposes by the ACT Government.”

However, Region Media understands that staff and others taking meetings with government have expressed frustration with the functionality and useability of Webex.

Mr Coe said the use of Webex for committee appearances was “not optimal”.

“Given that this is the first hearing with you, Chief Minister, I think it is reasonable for the Assembly committee to seek an optimal way to scrutinise the government during this process,” he said.

“So I unashamedly request that, in the future, you connect via video using the Zoom app.”

“Zoom has been assessed as an inappropriate method for Ministers and ACT Government officials to be presenting evidence,” the government spokesperson said.

“As such, the advice provided to ACT Government is, given the numerous inherent security vulnerabilities of the Zoom product, and the availability of secure alternatives, that the service should not be used for official Government purposes.”

Data security and personal privacy concerns have been frequently raised by government officials, politicians and the public alike as businesses increasingly move online and to working from home arrangements because of COVID-19.

Of recent concern is the COVID-19 tracing app being developed by the Federal Government. The app will track the movements of individuals who download it to make close contact tracing of positive cases easier for health officials.

But Mr Barr said he has raised the security concerns regarding the app with his National Cabinet colleagues when they met on Tuesday (22 April).

“I understand the intent of the application would streamline processes and make tracing easier, but it would need to be designed with privacy at the forefront,” Mr Barr said.

“[National Cabinet] spent a long time discussing the COVID-19 tracing app. I know this has been the subject of considerable community debate here in Canberra and I want to stress to people that this is still a work in progress.

“The many and varied concerns that people have raised at the start of the process have been heard, and we are in a much better position now having heard those concerns, to have in place an app that more people would be comfortable with.”

Mr Barr said he personally raised some issues in the cabinet – particularly around early engagement, a transparent process and privacy concerns – and was pleased with how they were responded to by the Prime Minister and other state and territory premiers and chief ministers.

New Zealand Prime Minister Jacinda Ardern has asked citizens to keep a diary of their movements to make contact tracing easier, an idea endorsed by Mr Barr if residents don’t want to use the forthcoming app.

“If you do not have a mobile phone or are not interested in downloading an app, and you do want to keep a written record of all the people you come into contact with in case you or one of those people test positive, but all means do that,” he said.

“If you are a close contact to someone, or you do test positive, then the phone call will come and there will be an effort to retrace your steps.”

Further work on the app is continuing but it is in a much better place than it was several weeks ago, Mr Barr said.

I accept there are some security concerns with Zoom, but I don't see how the Labor ministers could justify refusing to use it when it was being used for a public hearing.

James Daniels why did the committee choose to use that platform, and who choose it when the ACT Government as a whole uses Cisco Webex? Politicking maybe???

nobody - 17 minutes ago
I agree the trend is away from fossil fuels, so that all our coal derived electricity, gas derived heating, and and oil deriv... View
chewy14 - 2 hours ago
Nobody, Except the clear evidence is that the transition away from fossil fuels is well underway with renewable energy source... View
nobody - 3 hours ago
The day EVs stabilise the grid, will be the day pigs fly. In recent proclamations, this regime has told us that gas will be p... View
Property 1

Stuart Green - 1 hour ago
Scott Bell Thats obvious, they'll light us up for more on the other 4 days... View
Community 14

astro2 - 1 hour ago
If you would prefer to take your own private motor vehicle to the shops then you may continue to choose to do so. However the... View
Deborah Gale - 3 hours ago
Flannie! View
Douglas Ryan - 5 hours ago
Bruce Rossel flanno everyday to become a thing View
News 1

Peter Curtis - 13 hours ago
How is that the Libs can take the incumbents on from the left? They raise real issues. View
Motoring 30

@The_RiotACT @The_RiotACT
They rescued their cattle from the #Braidwood bushfires only to lose their home and herd in the floods - but Peter and Tracia are soldiering on https://t.co/4porXDUR3I (56 minutes ago)