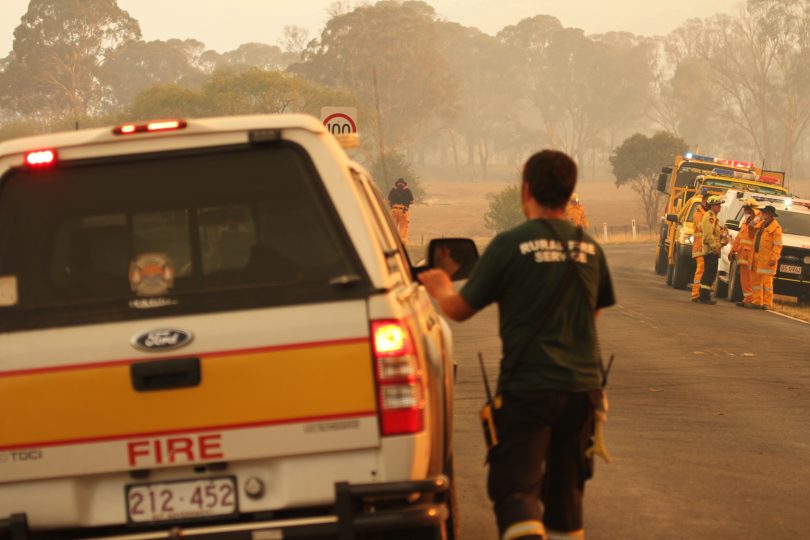 Member of the ACT Rural Fire Service at the Orroral Valley fire south of Tharwa on 31 January. Photos: Michael Weaver.

Explosive claims from a leaked internal document about the Emergency Service Agency’s handling of the recent bushfire season are “totally ill-informed”, according to a distinguished professional Canberra firefighter with more than 32 years’ experience.

Retired Superintendent Pat Jones labelled the stories reported today in The Canberra Times as “absolute rubbish” and hurtful to the people who worked on the frontline of the summer’s bushfires and the Orroral Valley fire emergency.

The document has been described by the ESA as a “‘draft for discussion” document, intended as part of a wide-ranging review. But the raw comments were never intended for public dissemination and have not yet been analysed or evaluated for accuracy.

No longer bound by the ACT Public Service Code of Conduct, Mr Jones (as he is now) told Region Media there are certainly volunteers in the ACT Rural Fire Service who don’t like being told what to do.

He retired from the ACT Fire and Rescue service in February after working in the ESA’s senior incident management team with commissioner Georgeina Whelan from the end of November to the beginning of February. He gave directions that shaped the course of the Orroral Valley fire. 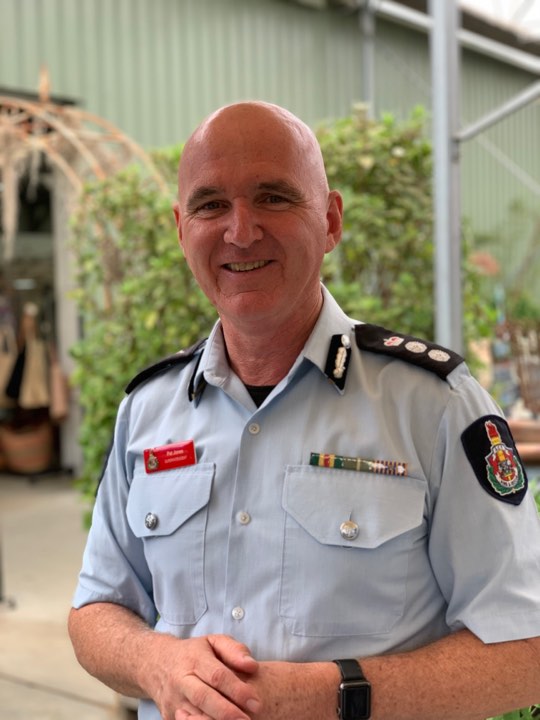 “The comments made today in The Canberra Times are totally ill-informed,” Mr Jones said. “I read the story and thought it was ridiculous. Canberra needs to know how well Georgeina and her team went, rather than people taking potshots a couple of months down the track which aren’t factual and aren’t true.

“We worked really hard at telling the truth during the entire period of the fires and I think it’s unfair that people are now using untruths to tarnish all the good things that have happened.”

He also backed the leadership of the ESA commissioner.

“Georgeina held people to account during that period which some people didn’t take very well, particularly some of our volunteer and rural fire service staff, who didn’t like being told what to do or how to do it.”

However, he said the most annoying part is that people took aim at a leader who should be held in higher regard.

“We had a male commissioner in the RFS in Shane Fitzsimmons who has quite rightly been lauded as a hero, and we’ve got a female leader who is being undermined by people for whatever reason without any idea of what she gave up.

“From 21 November to the 2nd of February, I had four days off in that period and I didn’t see Georgeina have any days off. She gave up going to her best friend’s wedding, she gave up a two-week family holiday,” Mr Jones said.

“She brought a military aspect to what we did, which we’ve never seen before, and it worked really well. She shouldn’t be under scrutiny for having worked so hard.” 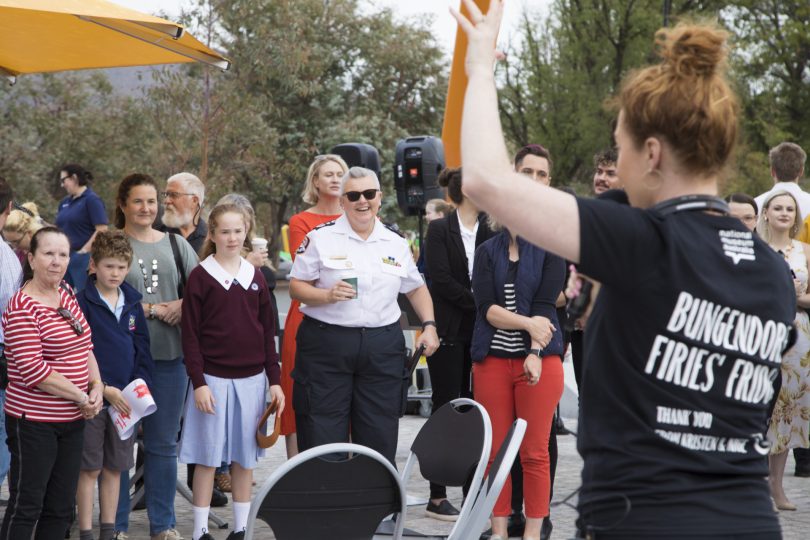 ESA Commissioner Geogeina Whelan watches as Kirsten from Mix 106.3FM hosts the dedication of the Bungedore fridge at the National Museum of Australia in February. Photo: Michelle Kroll

Mr Jones said comments in The Canberra Times describing a “culture that resulted in decision-making paralysis” are absolute rubbish and undermine what actually happened.

“Decisions were being given very quickly from the incident management team to operational firefighters and every day we provided them with what we call an incident action plan that was articulated to every person who went out on the fire ground, so they all knew what our plans were and what decisions were being made for the day.

The Canberra Times also reported that firefighting aircraft were asked to fly at “dangerously low heights” during the emergency because it would make for a “good news story”.

“We gave broad objectives to the aerial firefighting teams and they enacted them in the most focused way that they could. At no time while I was there was any comment made about trying to get good news stories. No pilot would ever risk their licence to get a good news story,” Mr Jones said.

As a professional firefighter, Superintendent Jones had a long list of citations for decades of service and outstanding conduct, including the Humanitarian Overseas Service Medal and Canterbury Citation for his service after the Canterbury Earthquake in 2010. He also has a Churchill Fellowship and received citations for meritorious service, and Chief Officer and Commissioner commendations during his career.

In 2009, Mr Jones was a leader in the response to the Black Saturday bushfires in Victoria. One of Mr Jones’ friends and colleagues didn’t return that day. He says people need to realise the gravity of the danger that firefighters faced at the Orroral Valley fire front lines.

“I had a very good friend who was on the very first truck that went into the Orroral fire,” he said. “I’ve spoken to him since and he said it was one of the most dangerous fires that he’s ever been confronted with. He’s been a volunteer firefighter as long as I’ve been a professional firefighter. He said getting out of there and letting the fire come out of that terrain was the smartest thing they ever did.

“The strategies they used put firefighter and community safety first and that’s all you can ask for.”

However, Kevin Jeffery, long-serving volunteer of the Rural Fire Service and former paid member of the ACT Bushfire Council who now runs the Tharwa General Store, said the morale of volunteer fire-fighters was low after their views had largely been ignored.

“You can’t make volunteers just spray water. You actually have to give them some responsibility because they have huge amounts of experience and knowledge and they also go through huge amounts of training,” he said.

The ESA said it has already commenced a thorough review process of the bushfire season and that more than 38 workshops have been undertaken with volunteers and staff.

“The ‘draft for discussion’ documents collected from all areas of the Agency have been provided to an external consultant, who has commenced a process this week to analyse the honest and unedited feedback received from volunteers and staff as part of the evaluation process,” an ESA spokesperson said.

“The internal after-action review process only works if volunteers and staff are comfortable to express their views and experiences in a safe and supportive environment. Discussing a ‘draft for discussion’ document in the media at this early stage of the review works against this approach.”

I think the issue is that the Canberra Times wrote the article – they are after a head line and people to pay for their subscription service. I was absolutely gobsmacked at some of the ridiculous fear inducing reporting from the CT during the Orroral Valley Fire – rather than be a trustworthy news source they were like a tabloid magazine. Some fact checking and responsible reporting might go a long way.

And cheers to the ESA and the fabulous leadership which at the end of day along with all of the firefighters (paid and volunteers) kept us safe.

Well said, the leaked information was clearly biased and wholly unreliable! Stating that planes deliberately flew low for a good photo op is just ridiculous! No pilot in their right mind would risk the lives of the crew and the aircraft for such a stunt!

Meaning what exactly? As opposed to the volunteers who are miffed that they didn’t get what they wanted? Yeah, sounds about right. Pat has an abundance of experience in fighting fires both urban and rural. I would take his advice over any part timer who thinks they know everything because they volunteer on the odd weekend. And before you jump down my throat, yes, I have volunteered and I know the culture very well.

Good to see the white-anting after the fact in a bid to reduce the amazingly good job done by the upper leadership and members on teh ground has begun. Why does there have to be “blame” anywhere here?

Exactly, lessons learned after these events are supposed to better prepare for the next time but it seems that there is an increasing need to blame people for not knowing what nobody knew. As they say hindsight is 20/20.

The politics and the personalities are ultimately secondary issues – with increasingly nasty summers on the way, we need to do all we can to get beyond the point where residents of large parts of Canberra (not just the “fringe” areas) are expected, for a couple of months of the year, to be on the edge of their seats, and ready to pack up their lives at very short notice, and head for somewhere safer.

If we can have a Bush Capital with proliferating high-rise towers and trams, we can have one without risky fuel loads, too.

I think they all did a bloody amazing job out there!

Onya Pat, you guys did an amazing job