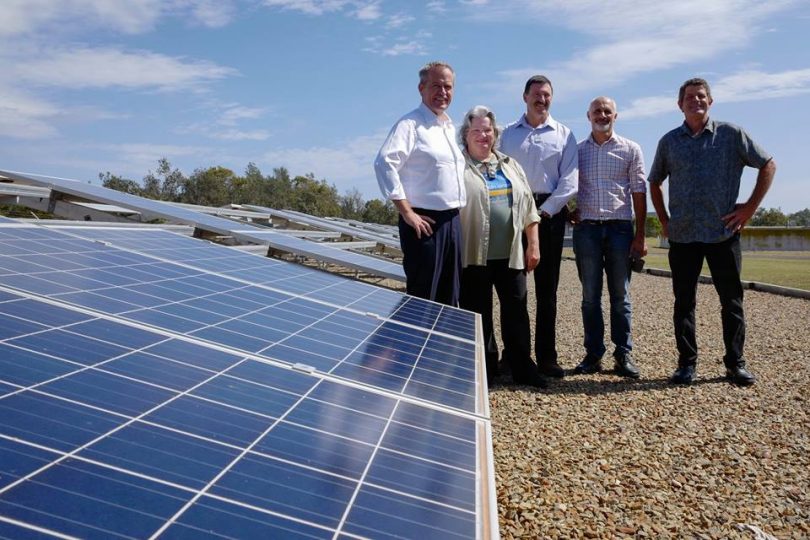 Tathra’s history in both addressing and living with climate change has seen it placed at the front of the queue for one of Bill Shorten’s $10 million Community Power Hubs.

In the Bega Valley for the announcement yesterday (29 January), the Opposition Leader named Tathra as the first Power Hub location as part of Labor’s $100 million Neighbourhood Renewables Program.

“Labor will work with local communities, local councils and renewable energy groups to determine the best location for the Hub, but the benefits of the Hub will be felt across the Far South Coast.”

Pointing to the Tathra community’s numerous human signs on the issue, the most recent of which read ‘Renewable Energy Now’, Mr Shorten suggested Tathra had shown leadership that was now being rewarded.

“What we see in Tathra is a description of what is happening [across] Australia – the people of Australia are ahead of the Government of Australia,” he said.

“The Tathra community is already ahead of the game when it comes to renewable energy. It was the birthplace of the Clean Energy for Eternity group which has focused on encouraging individuals to invest in renewable energy sources and engaged in fundraising activities to put solar panels on community infrastructure.”

“I am sure our recent bushfires have been part of this as well, we have actually borne the brunt of climate change,” Dr Nott says.

“This allows us as a town to move towards our next goal of 100 per cent renewable energy.”

How the Hub will work will evolve over time it seems.

When asked for more detail by Region Media, Mr Shorten described it as a series of projects that deliver cheaper power and renewable energy.

“The Hub will bring legal and technical expertise to the passion of community ideas.”

Dr Nott says: “This gives us an opportunity, we have been working on a strategy for 100 per cent renewable energy in Tathra for some time.”

“This gives us the opportunity to work together – the community, with local, state, federal government to come up with a strategic approach to powering our town with renewable energy.

“That will involve a range of different generation and storage technologies – like the exciting field of pumped hydro and batteries, and how we reduce our energy consumption.”

Around 2 million Australian homes currently have rooftop solar. Mr Shorten says the 10 Community Power Hubs around the country will allow low and middle-income earners to “embrace the clean energy revolution”.

“This is the future, Australia should be an energy superpower,” Mr Shorten said.

Clean Energy for Eternity will host a public meeting on 19 February to explore the idea of the town moving towards 100 per cent renewable energy by 2030. The meeting will be held at Tathra Public School from 6:30 pm, with former Liberal Leader, John Hewson a guest speaker.