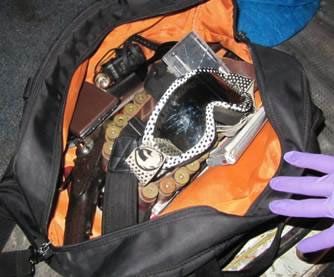 ACT Policing seized a shotgun, ammunition and other items from a van parked in Gowrie late on Thursday night (July 10).

Around 11.20pm, suspicions were aroused when Tuggeranong Patrol officers ran routine checks on a white Mitsubishi Express van parked in Dalziel St, Gowrie. The van had no front registration plate and the rear plate was reported stolen.

Checks revealed the van had been stolen in late June. Police received permission from the owner to access the vehicle and found a shotgun, ammunition, and other items, including torches, stolen power tools and a balaclava inside. A gunsafe with a cut lock was also found in the van.

It is still to be determined whether the firearm was used in the commission of an offence. All the items will be subjected to forensic analysis. Police investigations are ongoing.

Police urge anyone who witnessed suspicious activity in the area of Dalziel Street on Thursday or may have information regarding this incident to contact Crime Stoppers on 1800 333 000 or via act.crimestoppers.com.au. Information can be provided anonymously.