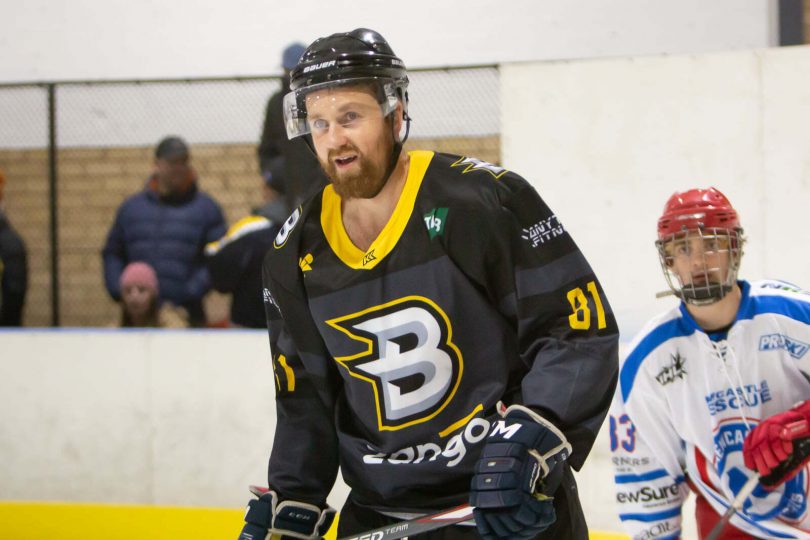 Matt ‘Wombat’ Harvey will play his last match for CBR Brave after playing since their inaugural season in 2014. Photo: Scott Stevenson.

CBR Brave will celebrate 40 years of ice hockey in the ACT with an exhibition game against legends of the now-defunct Canberra Knights.

The Brave took over as Canberra’s ice hockey team in 2014 when the Knights folded due to financial troubles and poor performance on the ice.

The exhibition game on Saturday, 4 December, aims to commemorate all the efforts of Canberra ice hockey players, staff and supporters, past and present.

Also being celebrated on the day will be the career of Brave captain Matt ‘Wombat’ Harvey, one of the founding members of CBR Brave, who will play his final match in the yellow, navy blue and white.

Matt is heading back to Canada for a year, and the exhibition game provides an opportunity to farewell the Brave faithful.

“I would say the sport and the culture in Canberra is fully embraced by everyone in the community,” he says.

“From the players who play the game, to the fans who come to watch the game, it creates an atmosphere that makes it the best place I’ve ever played.”

From humble beginnings, the Brave quickly rose to the top of the Australian Ice Hockey League (AIHL). Matt says there was a sense something special was brewing from that inaugural 2014 season.

“Even in that first year, we had a good team that made it to the final four,” he says. “From there, we’ve just been progressing, gaining momentum and getting better every single year to the point where we’ve probably been the top club for the past three years in terms of statistics.

“I didn’t see that happening. It came as a major surprise to me. I think we just had all the right ingredients with management and players.”

Matt believes the club will benefit in the long run from having some established names absent in 2022, describing it as a “really good chance for up-and-coming players to gain experience”.

Despite this, he certainly isn’t tempering expectations heading into 2022, saying the Brave can win it all and hinting the club will likely be in a strong position for some time to come.

“What we’ve done so well is create the most important thing: a culture based around passion, winning and commitment so I think even with a few changes in place, we have all the key ingredients of a squad that can play through all levels,” says Matt.

“When other people can see how fun it is to play here, how good our team is, and how serious we take it, that all comes from a place of passion and fun.”

Matt says he is looking forward to seeing some of the “old wizards” return to the ice on 4 December.

Proceedings will start at 5:30 pm on 4 December. Entry is free to all 2021 CBR Brave members and sponsors with ticketing allocations. They will also receive a priority window ahead of the 2022 Australian Ice Hockey League season. Tickets for non-members are available online starting at $20 via the CBR Brave website. There’s a 700-person capacity at the ‘Brave Cave’ on the night.