Simon’s planning a park for Chisholm 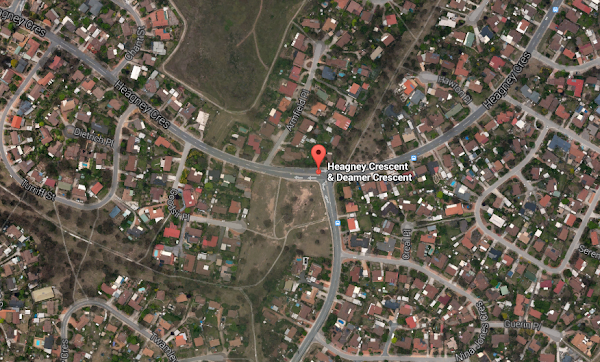 Simon Corbell has announced progress in his plans for a Chisholm park:

A vacant block in Chisholm, previously earmarked for development, has moved one step closer to becoming a park today following a move to change the land’s zoning.

Chisholm section 590 is on the corner of Deamer Crescent and Heagney Crescent, Chisholm.

The community’s wish to see the land turned into a park goes back to the establishment of the suburb in the 1980s when the land wasn’t developed and a small play area was constructed on the site.

Following a proposal to subdivide the land in 2011, strong community support for the retention of the site as public open space prompted the Government to start a process to formally recognise the site as a park.

The government made a commitment in July 2012 that this block would not be sold for development, but would instead be retained as a park for the local community.

While parkland is an appropriate use for the current zoning the government has recently been approached to officially name the park the Caroline Chisholm Park.

“This variation is an important step that, if approved, will give proper status to this popular area of open space which could then be formally named Caroline Chisholm Park,” Mr Corbell said.

Can’t we just build a gigantic wall around Chisholm and turn it into the ghetto it truly is?

Can’t we just build a gigantic wall around Chisholm and turn it into the ghetto it truly is?

Waste of time and money: those Chisholm ingrates will only trash the place.

Well with the price of land these days, this is a substantial ‘gift’.

Jo Telfer - 3 hours ago
Doug Damn, well that sucks. Another idea: make it a little kids only thing ..seems the momentum is the main factor in the sev... View
Doug Jackson - 3 hours ago
Kane P-s from a financial perspective, the cost between remove and repair is massive - remove is so much cheaper. View
Doug Jackson - 3 hours ago
Jo Telfer The only thing an assessment will do is identify that the government has to spend money to fix it to reduce the ris... View
News 3

@the_riotact @The_RiotACT
What connects actor Billy Zane to Telstra Tower? How fast can you go on an e-scooter? Clem Cummings designed what iconic piece of #Canberra architecture? If you know these answers, take our weekly Ken Behrens #Quiz! https://t.co/m0lOAYZGLY (33 minutes ago)