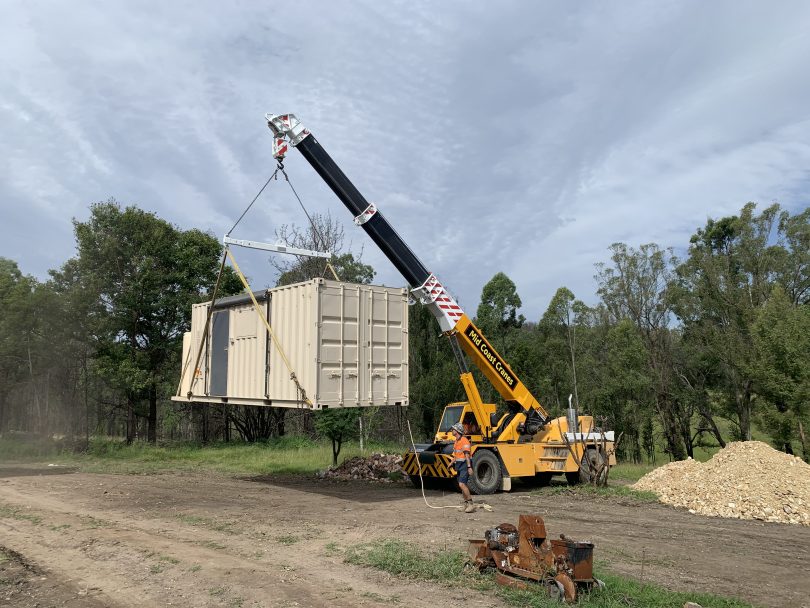 Never has something so small meant so much to the Batlow community, with some of the town’s residents welcoming the arrival of a truckload of temporary accommodation pods.

Two temporary accommodation pods are among 100 being rolled out across bushfire-affected communities in NSW, thanks largely to a partnership between the NSW Government and Andrew and Nicola Forrest’s philanthropic organisation Minderoo Foundation.

Although the pods are not designed for long-term accommodation, they are intended to provide a solution in rural and remote areas devastated by the past summer’s bushfires while the rebuilding process takes place.

The 7.2m x 2.4m units are fully self-contained and come equipped with a 2300 litre water tank. They operate on a 5kVA generator or use a 15-amp external plug-and-play mains connection.

Internally, they have a toilet, shower and small open kitchen with a two-burner stove.

Temporary accommodation pods are being delivered to bushfire-affected communities in Australia, with six headed to the Batlow region. Photo: Minderoo Foundation.

Batlow resident David Jones, who has lived on his property for 30 years, is looking forward to receiving a Minderoo pod.

“I’m absolutely delighted to be able to be back up here on my block on Mines Road, which I like to call ‘My Road’,” he said.

“We’ve spent the weekend clearing the property and I’d like to thank everyone who has made it possible to return.”

NSW Deputy Premier and Minister responsible for Disaster Recovery, John Barilaro, said he is proud of the temporary accommodation pod program, which takes care of the most vulnerable people in the community.

“We have already provided emergency and temporary accommodation to 8000 people since November last year,” he said. “We recognise that for some people, a hotel or motel in the next largest town doesn’t suit as they have responsibilities such as tending to animals and livestock.

“I am proud to be delivering this first rollout of pods to some of the community’s hardest-hit towns by the fires. The pods provide people with a solid roof over their head during winter while they work through the rebuilding process.”

The Minderoo Foundation’s Fire Fund has allocated $10 million to support communities rebuild and revitalise local economies in the aftermath of the bushfires.

Member for Wagga Wagga Dr Joe McGirr said the basic accommodation will allow people to stay on their land while they rebuild.

“This initiative will be a huge help for those doing it tough in Batlow, allowing people to stay on their own property in a temporary structure for up to two years in line with recent amendments to planning regulations,” he said.

Dr McGirr added that finding a way for people to stay safely and securely in their community, and close to family, would provide benefits that reach far beyond the physical structure itself.

“I want to extend gratitude on behalf of myself and Snowy Valleys residents to the Minderoo Foundation, which has worked tirelessly to deliver these pods as quickly as possible with social distancing measures in place,” he said.

To date, the Minderoo team has visited Wytaliba, Tenterfield, Torrington, Drake, Moruya, Mogo, Malua Bay and Merimbula in NSW; Kangaroo Island and Woodside in South Australia; and Mallacoota and Bairnsdale in Victoria.

Once the pods are no longer required, they will be removed and stored by Minderoo for possible use again in future disaster recovery operations.

Kerry-anne Stafford - 19 minutes ago
I’m a mum of 7 and was made homeless last year. ACT housing had me in a holiday park in Watson where I had to pay $600 a we... View
Lauren Herbert - 53 minutes ago
Lesli Cameron from the act: “The principal of security of tenure still underpins Housing ACT tenancies to a large extent. I... View
Lea Powell - 54 minutes ago
Jenny McInnes sure, however, in my twenty plus years as a tenant, I have seen a lot and have experienced a lot too. I don’t... View
Sport 1

Kathleen Lee - 3 hours ago
What! They are historical buildings. Don't be so silly. View
Glenys Callaghan - 6 hours ago
I love these buildings, they represent Canberra to me. I hope they are never pulled down as they are part of Canberra’s his... View
Property 5

ChrisinTurner - 6 hours ago
Some of the footpaths in Braddon are still narrow concrete and the rest dirt. View
Business 1

Anna Noces Gatdula - 8 hours ago
One of the most hard working I work with! Bless you barb😘 View
show more show less
*Results are based on activity within last 7 days

Canberrans under the age of 50 will be shepherded towards the Pfizer vaccine at the Garran vaccination hub instead of receiving...
Food & Wine 35

@The_RiotACT @The_RiotACT
The number of vacant properties to rent in the ACT is shrinking. New data shows just how tough the market is https://t.co/MMNxYSKl3A (4 hours ago)