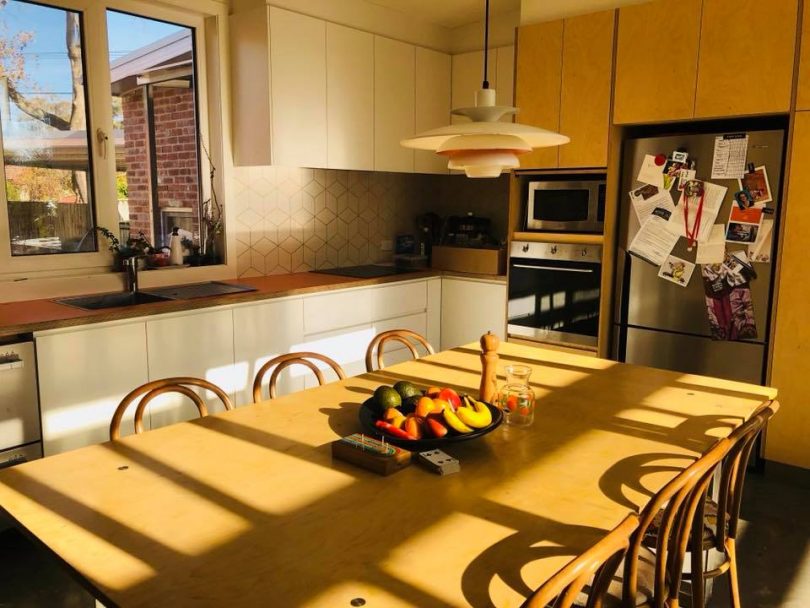 Let the sunshine in. This kitchen is flooded with warming sunlight despite it being mid-winter and the shortest day of the year, thanks to good design. Photo: Supplied.

Feel like you may as well be burning cash to stay warm this winter, and when summer is in full swing it’s the same story to stay cool?

Whether you are looking for some energy saving tips for an older property, or you want to get it right for a new one, the Australian Institute of Architects’ annual Solar House Day on 25 July is the event to go to for some free advice and exposure to a range of products and technologies that will help you to be comfortable in Canberra’s climate of extremes.

The free event at the Shine Dome, Australian Academy of Science in Acton, includes a two-hour session from 4:00 – 6:00 pm where the community can browse and talk with exhibitors of sustainable products and technologies, as well as talk to architects about how to design for the climate.

This will be followed by a public lecture and panel discussion on The Future of Housing in Canberra: What does it look like? What do architects contribute to the answer?, with Catherine Townsend, the Government Architect; Antonio Mozqueira, Manager of Climate Change at the ACT Government; and Glen Dowse, President of the Housing Industry Association (ACT and Southern NSW) and an owner and director of DNA Architects.

There will also be a series of bus tours on 29 July and 5 August to climate responsive homes around Canberra.

Architect Shannon Battison from The Mill: Architecture and Design, who is also Chair of the ACT Chapter’s Sustainability Committee and a recent winner of the Emerging Architect Prize, said the event was always a popular one but there was real momentum in Canberra for sustainable approaches to building and energy use.

She said Canberra was very open to new ideas and motivated to get it right. “We’re uniquely placed to take advantage of the climate that we’ve got,” she said.

Ms Battison said a five-minute ‘speed dating’ session with an architect from the sustainability committee at the event could be a game-changer because everything starts with design.

“If you’ve got a plan you’re thinking of building, even if it’s a project home plan, and you want some quick advice on any simple changes that will make a really big difference to how it performs or its livability, here’s a chance to get some advice,” she said.

Ms Battison said the ACT had an extreme climate but one which was pretty easy to design around.

“What people are realising is that even though we get bitterly cold winters they’re almost always sunny so its pretty easy to design to take advantage of that sun, even if it’s freezing outside you have completely free warmth,” Ms Battison said.

“Likewise in summer our sun is very, very hot and our days are consistently very warm but our nights are almost always cool, so if you can design to keep that sun off your windows as much as possible during the day, and design so all your windows open up so you get cross-ventilation in the evening when that beautiful cool breeze hits every night, then you start from that beautiful fresh point every morning.”

This way you might only need to use the air conditioning for an hour or so when it got uncomfortable.

Ms Battison said choosing the right builder was important but if you got your design right to start with, such as orienting the house to the north, then the builder didn’t have to work too hard to be able to construct a home that performed well.

“Make the changes cheaply at the start that you won’t be able to make later on,” she said. 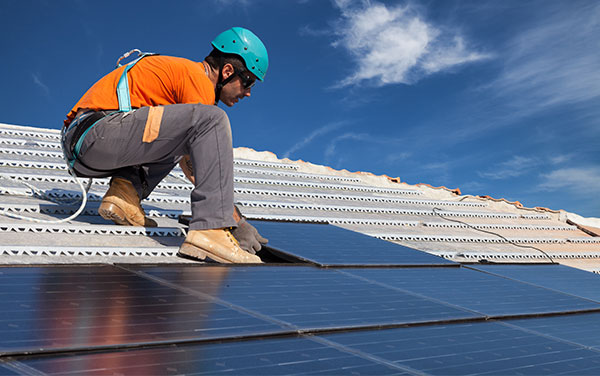 Solar technology can make a huge difference to energy bills, and with batteries becoming more affordable, will only become more popular.

But she acknowledged that despite mandatory six-star energy ratings there were still too many new homes in Canberra that did not perform well.

“Most old Canberra houses wouldn’t even be zero stars, so the step up from an old house to a new minimum standard house is going to be huge, but we don’t have a way for that to be actually enforced. So we’re getting a huge improvement but we’ve got a long way to go.”

Ms Battison said many new houses on paper might meet the standard but in reality, they did not.

“So while they will still perform better than an old house, they’re not performing nearly as well as we need them to if we’re going to make a real change to our environmental situation,” she said.

Ms Battison said the energy rating system needed to be enforced. “If we’re going to have a minimum standard we may as well not do it if we’re not going to enforce it,” she said.

A broad range of products would be on display at the event including windows, insulation, hot water systems, curtains and blinds, which Ms Battison said played a huge part in making a house perform.

“We try to have a really big range so it doesn’t matter if you are building a new home or trying to refit older Canberra homes that are notoriously freezing,” she said.

Of course, there will also be several solar panel providers.

“Sometimes there’s not much you can do and you’re going to need more heating and cooling but you can offset that dramatically by investing in solar technology, that reduces the load on the grid at times when you need to bump your house up a bit,” Ms Battison.

With batteries so close to being more affordable, solar was going to be huge, she said.

For more information go to http://architecture.com.au/events/state-territory/act-chapter/act-events

Steph Hamleed - 3 minutes ago
Melanie Leedham bring the kids to this View
Sarah Handley - 40 minutes ago
Meredyth Wendel how will the cygnets cope lol View
nobody - 1 hour ago
Who in their right mind thinks all 10,000 plastic ducks will be recovered? View
Lifestyle 23

JC - 46 minutes ago
Correct death rate has not been the same as the flu. For one reason and one reason only and that is because we have restricti... View
JC - 53 minutes ago
It’s been standard practice through the pandemic. Rightly or wrongly. View
Maya123 - 1 hour ago
Twas always the way. I have seen an old death certificate where a long term medical condition was mentioned, but the cause of... View
Opinion 45