Solstice party at the film and sound archive 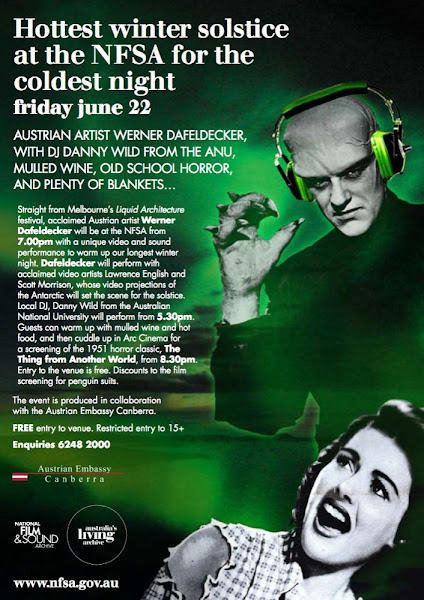 To mark our Extreme Film and Sound Exhibition, the centennial of Australia’s engagement with the Antarctic continent, plus the traditional polar explorers’ Longest Night festivities, the NFSA will become the ultimate in Canberra chill-out zones.

From 5.30pm our theatrette will be screening a selection of filmic experiments beyond the circles of the Antarctic and the Arctic, including diverse works made by Stan Brakhage, Peter Hutton and Ralph Steiner.

From 7pm the NFSA courtyard will feature the Australian premiere of Monolith – a major new work by Austrian artist Werner Dafeldecker and his Australian collaborators Lawrence English and Scott Morrison featuring dual video projection and live soundscapes captured in Antarctica.

And from 8.30pm in Arc, a screening program of the chilling and the sublime, featuring The Thing from Another World (1951, USA, 87 mins, 35mm); director Christian Nyby and producer Howard Hawks’ classic Arctic paranoid horror thriller.

The event is produced in collaboration with the Austrian Embassy Canberra. FREE entry to venue.
Arc screening: $5 / $3 charge for those wearing tuxedos or other penguin suit!

Jimbo Lambert - 3 hours ago
The developer should offer to demonstrate actual construction price increases, beyond their initial contingency, and offer th... View
Community 38

Jo Telfer - 5 hours ago
Doug Damn, well that sucks. Another idea: make it a little kids only thing ..seems the momentum is the main factor in the sev... View
Doug Jackson - 5 hours ago
Kane P-s from a financial perspective, the cost between remove and repair is massive - remove is so much cheaper. View
Doug Jackson - 5 hours ago
Jo Telfer The only thing an assessment will do is identify that the government has to spend money to fix it to reduce the ris... View
News 3

An ACT public school principal has come out against the ACT Government's COVID-19 vaccine mandate for teachers in a Facebook...
Best of Canberra 55

@the_riotact @The_RiotACT
What connects actor Billy Zane to Telstra Tower? How fast can you go on an e-scooter? Clem Cummings designed what iconic piece of #Canberra architecture? If you know these answers, take our weekly Ken Behrens #Quiz! https://t.co/m0lOAYZGLY (3 hours ago)