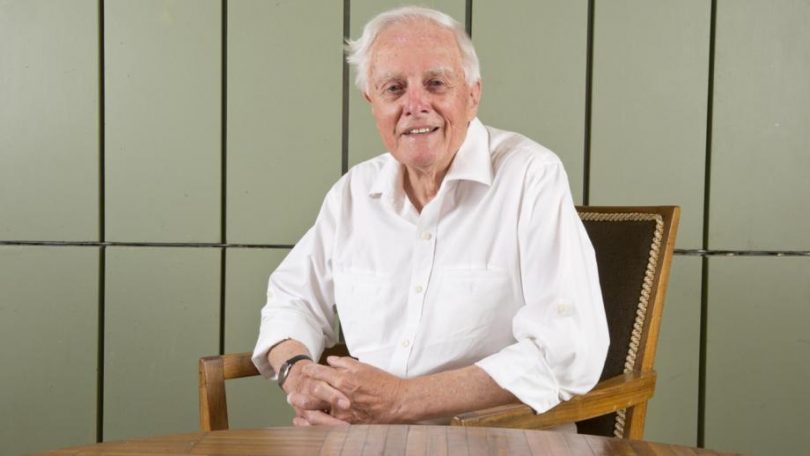 During all 97 years of his well lived life, architect Derek Wrigley OAM was a tireless believer in the principles of design as being integral to solving problems of all kinds – whether it was solar passive design or the day-to-day difficulties faced by people living with disabilities.

It was for the latter that he was awarded a Medal of the Order Australia in 1989.

Ten years prior, while chairing the Australian Design Council’s Education Committee, Mr Wrigley had been one of the founding members of an ACT chapter of TAD, which then stood for Technical Aid to the Disabled.

Now, the acronym remains the same but it stands for Technology for Ageing and Disability as many elderly people can experience the need for the same kind of mobility devices as those living with special needs can benefit from.

Mr Wrigley himself became a TADACT customer during the latter years of his life.

In a book published to celebrate 30 years of TADACT is the line, “This is the story of an organisation that grew out of the question, ‘Why can’t disability aids be better designed?'”

And it was with this guiding principle in mind that Mr Wrigley dedicated a large proportion of his life to making disability aids more functional and less ugly during a time in which these kind of devices were not commercially available.

As well as founding TADACT and working as the group’s design coordinator, he went on to help establish TAD Australia to link all of the state groups throughout the 1980s. He later chaired the national body, from 1998 to 1990.

During these years he also travelled to New Zealand to deliver seminars regarding the TAD concept, which was growing in popularity across Australia.

An active member of the Working Party, Mr Wrigley was also instrumental in getting the Independent Living Centre in the ACT up and running in 1984, after which it served as a valuable resource for people living with physical disabilities until its closure.

Another initiative he headed in the ACT was the establishment of TADACT Productions, which had been an attempt between 1992 and 1994 to produce equipment at a greater volume than could be done by making customised solutions.

Current TADACT volunteer coordinator Graham Waite had known Mr Wrigley since 2006, and says that the OAM recipient’s involvement with the organisation continued right up until 2020.

“His last project as a technical projects volunteer saw him make a special table for a friend who had established the first TAD in Australia in 1975,” said Mr Waite.

“Derek was very much a person interested in design and making optimal designs that were suited to the function people wanted.

“He was an approachable, friendly person who always had in mind that what we were doing was helping.”

Mr Wrigley’s own writings echo his attachment to this sentiment of functionality, and it was a principle he stayed true to throughout his illustrious more than 70-year career in design.

Born in 1924, in Oldham, Lancashire, UK, he failed his high school certificate before going on to rank first in the country’s architectural exams in 1945.

However, post-war England offered little opportunity for him to explore his passion and theories of total and integrated design so he migrated to Australia with £100, his life savings.

Alongside building multiple homes, Mr Wrigley spent 20 years at the ANU where he designed the university crest and typeface, as well as sculptures, buildings, furniture and sound/lighting devices.

An interest in building solar passive homes later shifted to looking at ways existing homes can be improved, and he published a number of books on the subject.

His contribution to sustainable architecture is commemorated with the Derek Wrigley Sustainability Award given out each year since 2014 in the ACT Architects Institute of Australia Awards.

While in hospital in his last few weeks, he learnt of the most recent recipient of the award.

We lived next door to the Wrigleys on Jansz Cres – a fine example of his excellent architecture skill and exquisite design sense. A passionate man who instilled in all of us a love of art, design and caring for the planet, and each other. What a wonderful legacy. Thank you Derek ❤️

Farrer and Page Primary Schools had amazing play sculptures by Derek back in the 70s.
What a way to play 😊

Angie McDuff Dad loved that sculpture, enjoyed making it, he made a little model, then set to work. Used us to test if it could be played on, it was so much fun. Guessing it is still there, as it was built child-tough !

I understand that Derek also designed the University of Canberra symbol (5 curves in a circle) for what was then Canberra CAE. A great Canberran.

Bruce Hall Alumni pass on our deepest condolences to Derek’s family. He was a wonderful advocate for saving Bruce Hall at ANU, and did absolutely all he could to help us, even at 93! A wonderful principled man of many talents. May he Rest In Peace.

While at Burgmann College, ANU in the early 1970s, we had a project in Environmental Psychology to conduct a study of the College itself. The College was then in its second complete year.

Derek Wrigley (somehow) got to hear of it and asked for a copy. His thoughtful comments came back on a lot of our pages. They are one of my treasured souvenirs of those times and Mr Wrigley.

An amazing man. Many years ago, he showed me around his Mawson property, where he had set up his solar energy array. Well ahead of his time, his enthusiasm was very infectious. Wherever you are, Derek, I hope the sun always shines.