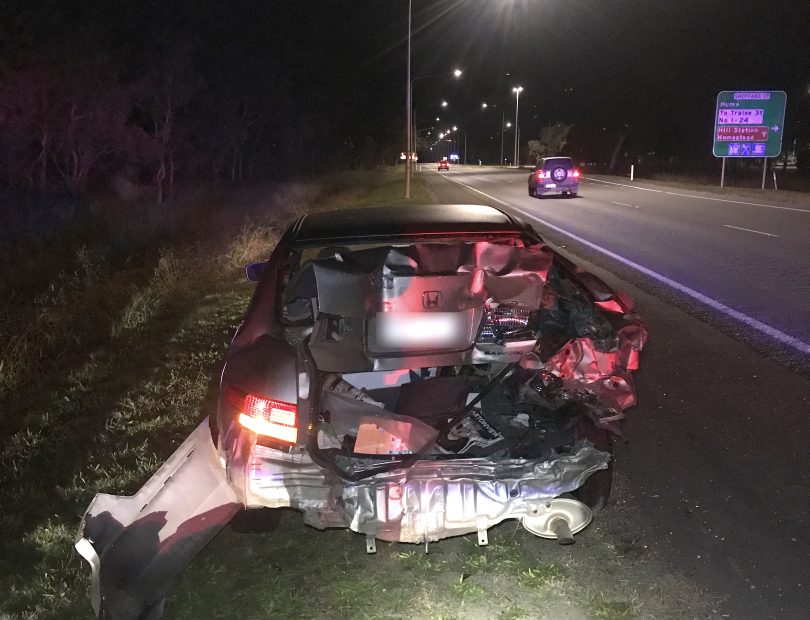 A collision on the Monaro Highway on Sunday night. Photo: Supplied.

Canberra drivers have been caught at speeds more than 50 km/h over the speed limit on multiple occasions over the past few days, prompting another plea from ACT Policing for drivers to slow down.

Two vehicles were detected travelling at speeds in excess of 150 km/h on Parkes Way last Thursday (14 May). One of the drivers stopped by police failed a drug test.

On Friday, a vehicle was detected doing 140 km/h in an 80 zone in Fyshwick. The driver failed a breath test and was found to be driving while his licence was suspended.

While stopping short of blaming the incidents on the easing of social restrictions from the COVID-19 pandemic, Detective Sergeant Boorman said it was only a matter of time before the multiple instances of poor driver behaviour resulted in someone being killed.

“I don’t know what’s causing this driver behaviour, but I do know what the effect will be – someone’s luck will run out and we’ll have a person, or people killed,” Detective Sergeant Boorman said.

“Police are seeing so many drivers doing the wrong thing, and it’s not just my road policing team seeing it, it’s general duties officers in marked cars, it’s criminal investigations officers on their way to other jobs and they’re all issuing infringements.

“It shouldn’t take the threat of being caught to make people do the right thing, because these people are, simply, risking lives. This behaviour has to stop.”

Another incident requiring the police occurred at 3:00 am on Sunday (16 May) when a car crashed into a house in Kambah. The 19-year-old driver failed a breath test.

On Sunday at 4.15 pm, the driver of a car that rolled several times on the Federal Highway was taken to hospital. 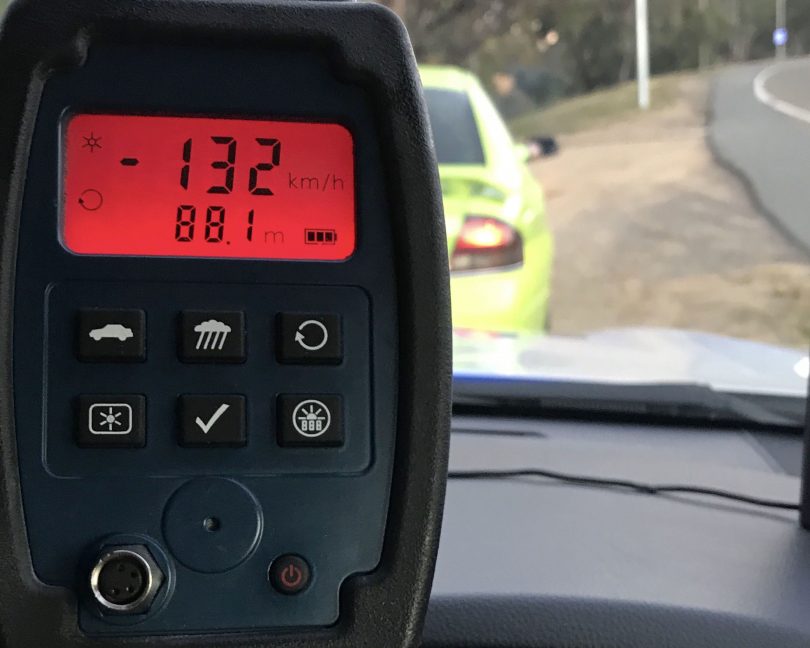 A speed reading from a driver on Drakeford Drive on Monday (18 May).

Also on Sunday at 7.30 pm, a ute rear-ended another vehicle on the Monaro Highway. The driver failed a breath test. He was allegedly using his mobile phone at the time of the accident.

In less than one hour on Monday (18 May), four drivers were detected exceeding the speed limit by more than 20 km/h.

A provisional driver was detected at 132 km/h in an 80 zone, while another driver was issued with an infringement for running a red light while a marked police vehicle was stationary at the intersection.

bryansworld - 1 hour ago
However, this would create a signal for new suppliers to enter the market and undercut the original ones who are trying to go... View
keek - 3 hours ago
Great way to ensure the prices of these things all rise very sharply once suppliers know there is an easy 15 grand in it for... View
Food & Wine 2

Ol L - 4 hours ago
When COVID 19 blows over most will rush back overseas. Hope there’s no COVID 20 or they will all want to rush back here aga... View
Community 1

Capital Retro - 4 hours ago
Are public toilets included in the plan? View
Opinion 4

jwinston - 6 hours ago
I wholeheartedly agree with your summation here Chewy14. This is a bit off subject but I’m very interested in the comment y... View
keek - 7 hours ago
I think you believe light rail to be a far bigger election issue than it actually is. I've found that outside of here, very f... View
Community 13

Ol L - 6 hours ago
Brindabella s? Would look like nothing recognisable as there hardly the Himalayas View
Capital Retro - 1 day ago
".... An emblem showcasing medieval queens, crowns, and castles, doesn’t represent 21st century Canberra..." We have all th... View
Food & Wine 1

TimboinOz - 19 hours ago
How to spend money, in public? AKA Konspikewus Konsumption. Look at ME!!!!! YAWWWWWWrrrrm. Build a veggie garden, grow your o... View
News 24

chewy14 - 20 hours ago
BJ, You aren't meant to bring these things up. The only information allowed is positive. It's efficient, it's modern, it's vi... View
chewy14 - 21 hours ago
JC We don't need news reports, transport Canberra publish the patronage reports. BJ's figures are accurate. https://www.trans... View
bj_ACT - 21 hours ago
Just for the record, the light rail business case for expected daily patronage was quite low in 2019 and we beat that in the... View
Property 6

Someonesmother - 21 hours ago
Gee why does this not surprise me? Look who the developers are. 43 car parks in a completely congested street, using Canberra... View
News 17

JC - 22 hours ago
China may well be a developing country with many that are very poor. It does however have a massive (millions) middle to uppe... View
keek - 1 day ago
Nobody held a gun to the Chancellors head and said "You must rely on income from foreign students and expand to a level where... View
chewy14 - 1 day ago
JS9, Whilst I would agree that the Federal government has set the framework and playing field that the Unis are operating in,... View
News 5

Richard Windsor - 24 hours ago
As the poor bunny who has been identifying mushrooms, both toxic and non-toxic for the ACT Hospital system since 1985 I must... View
show more show less
*Results are based on activity within last 7 days

@The_RiotACT @The_RiotACT
If you're an emerging theatre maker, where do you go for experience? Three local creatives say the Canberra Youth Theatre artists' residency has been invaluable for them https://t.co/wBFdnL4Ls5 (1 hour ago)

@The_RiotACT @The_RiotACT
Canberra Good Food Month kicks off next week, headlined by a culinary quiz at The Boat House, a pop-up at Bar Rochford & a gourmet dinner hosted by industry young guns https://t.co/CdwXqXozH6 (3 hours ago)