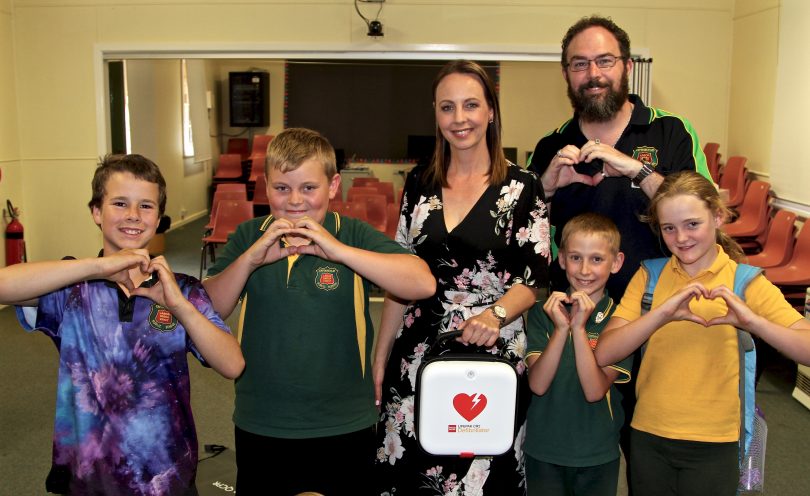 “Can you still do CPR if you have a wobbly tooth,” asks one of the curious students at Captains Flat Public School as they receive a demonstration on how to use their new automated external defibrillator (AED).

The AED was donated by St John Ambulance ACT today (25 November) after they saw a story in the RiotACT about the school undertaking a crowdfunding campaign to get a defibrillator for their school.

The school had already raised about $2000 for the new defibrillator that cost about $3300 each, but St John Ambulance CEO Bianca Russell said the opportunity to provide the school with its own AED aligned perfectly with their mission to get an AED within reach of every public area in the ACT.

“My aim is to have an AED within 90 seconds of most locations in the ACT. I would also like to see one in every school as a compulsory item,” Ms Russell told Region Media before handing over the life-saving device to the school.

During the handover of the AED, the students at Captains Flat were given a life-saving lesson by St John Ambulance paramedic Darryl Rice, who showed them more than just how to pronounce cardio-pulmonary resuscitation.

He also took them through the steps of bringing a non-responsive person back to life as the students sang “Row, row, row your boat”, which is the speed at which chest compressions should be administered.

Captains Flat principal Jason Marshall first realised the importance of having a defibrillator at the school when it took more than 40 minutes for an ambulance to arrive during an emergency there earlier this year.

“As a small school, we find it difficult to fund all the things we want to do, so this donation by St John means we can keep everyone safe while they’re at school,” Mr Marshall said.

“Our kids were all fully engaged in the lesson and for the opportunity to be involved in further training next year, which is also really great.”

Mr Marshall said they would use the money already raised for other programs in the school. 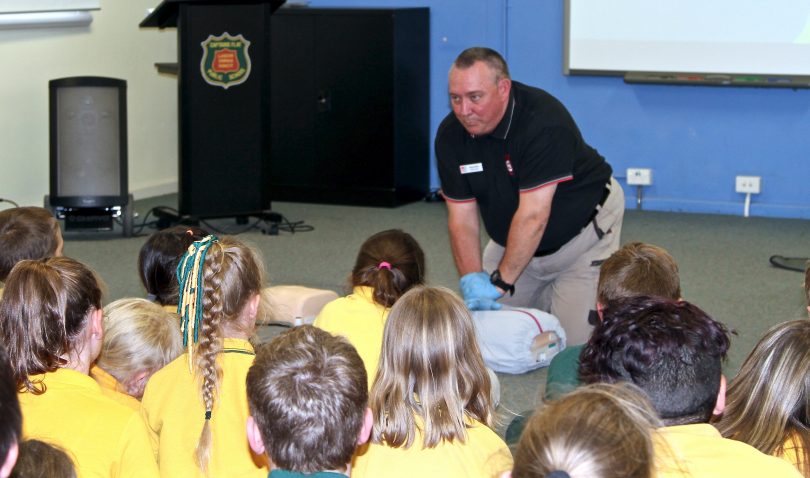 Region Media has also confirmed that an additional 100 AEDs have been purchased by the ACT Government and will be deployed to ACT Ambulance Services and Fire and Rescue.

The Justice and Community Safety Directorate spent $330,000 on the AEDs at the end of October, which were purchased from ZOLL Medical Australia.

The investment is in line with recent funding initiatives that have been announced by the Minister for Police and Emergency Services, Mick Gentleman, throughout 2019.

Twelve new state-of-the-art ambulances were put on the road in April, and $3.25 million of extra funding for frontline responders and resources was announced to help improve emergency response times in Canberra.

Back in January, Mr Gentleman announced $15.7 million in funding for two new paramedic crews and five new ambulances fitted with new AEDs to manage an increase of 19,000 ambulance call-outs since the start of the decade.

The announcement comes in light of a coroner’s report into the death of Theodora Zaal at Cavalry Hospital after the inquest highlighted a delay in the implementation of defibrillation as a result of staff unfamiliarity with new devices, recommending urgent training for nurses.

It is not known where the 100 additional AEDs will be located at this stage.

However, St John Ambulance CEO Bianca Russell points to many examples of defibrillators saving lives when they are close by, including in a gymnasium where someone went into cardiac arrest and was only saved by the quick thinking of a volunteer St John Ambulance officer who happened to be nearby. There was no AED in the gymnasium at the time.

“Every minute without defibrillation, your chances of survival decrease by 10 per cent,” Ms Russell said.

“It doesn’t matter where you are in the ACT, it will take longer than 10 minutes for an ambulance to arrive. We’ve had three success stories in the last four weeks where defibrillation has been used within two to five minutes and every one of those patients survived.

“We need defibrillators accessible to anyone. They’re no good if they’re locked away in a building because outside of business hours, they become redundant if needed in an emergency.

“Anyone can use one and they talk you step by step through the process.

“Schools and government departments have to have a trained fire warden and fire equipment in every building, and yet we’re dropping the ball on having the same legislation around having AEDs and even first-aid officers in our schools,” Ms Russell said.

Read more about what you need to know about using a defibrillator and why they are starting to pop up everywhere.

William Coats - 23 minutes ago
The land tax was to stop people “land banking” houses should be used as homes not stagnant investments View
Lea Powell - 6 hours ago
William Coats it takes time to change policy directions. It’s not as simple as a click of the fingers. View
Lea Powell - 6 hours ago
Kerry-anne Stafford appeal the decision. Why have they revoked it. Don’t take that lying down. View
News 5

Captains Flat school crowdfunding for defib to save little lives