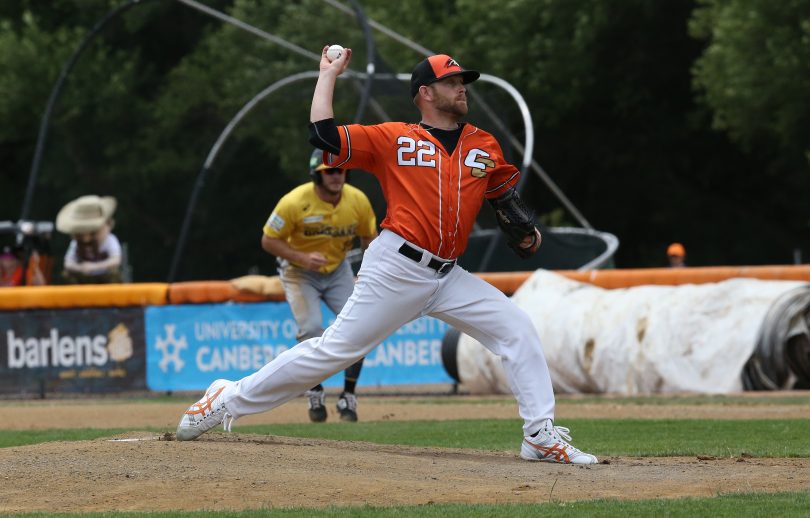 Canberra Cavalry pitcher Steve Chambers said a “couple of killer hits” is all it will take for the Cavs to turn their season around and start their charge towards a second Australian Baseball League championship.

Canberra hits the road to face the Adelaide Bite in a crucial series starting Thursday night (13 December), with the Cavs languishing in third place of the Northeast Conference, with a 6-10 record.

While Cavalry still has plenty of time to move into the top two in their division and guarantee a playoff berth, Canberra risks falling further behind the leading pack. Adelaide has a three-game lead over the Cavalry after opening four rounds, placing extra importance on this weekend’s inter-divisional match-up.

With only 24 games to improve their record and catch the five teams above them, pitcher Steve Chambers said the Cavalry are ready to turn their season around against the Bite. It will be an emotional return to the City of Churches for Chambers, who spent the past three seasons in Adelaide.

“I’m getting used to playing against my old sides, to be honest,” Chambers said. “After playing for three different teams in the league, I am always coming up against the teams I have played with in the past. I am looking forward to seeing a lot of my friends.

“But it will be interesting being part of the away team in Adelaide, walking into a hotel room and the different changerooms.”

It was in Adelaide where Chambers played alongside his good mate and fellow pitcher Loek van Mil who is still in Canberra Hospital recovering from a horrifying accident last weekend.

Game one will be an emotional one for both sides, with Adelaide officials announcing they will hold a minute of silence before the opening pitch.

Both franchises have been rocked by the news of van Mil’s injury, and none more so than Chambers, who developed a close relationship with the Dutch international over the past three seasons at the Adelaide Bite and during a mutual stint in Japan.

Manager Keith Ward has put his charges through light training sessions this week in an attempt to take the pressure off the side and to return the love and fun of baseball. Chambers said the approach has helped take a bit of the pressure and emotion away and has relaxed the side.

“We have been looking for that killer hit every week and sometimes it hasn’t happened. That is just the nature of the beast that is baseball,” he said.

“Training has been light-hearted but productive this week and there has been plenty of laughing and everybody seems very joyful and I think the light training has got everyone in the right head space for this weekend.

“The vibe in the clubhouse is pretty good. It is an important series but there isn’t a guy in this team who doesn’t think we aren’t capable of achieving playoffs and winning the Claxton Shield.”