Sub-urban by Bellucis – New bar, and a familiar restaurant returns 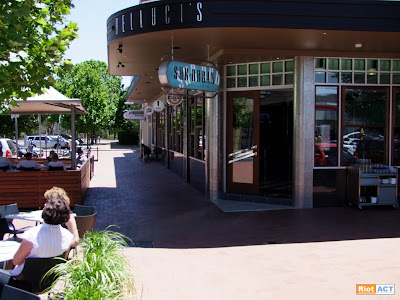 Bellucis has been lurking in its art-deco building at the end of Wooley St in Dickson for longer than I care to remember. I had the family part of my 21st birthday there.

After a major refit and expansion they’ve re-opened and done some rather inspired things.

The old restaurant is there with very tasteful wood panelling and a new emphasis on steaks.

But in the corner area they now have a very nice looking pub glorying in the name “Sub-urban”. On the Sunday afternoon we were there the staff were bright eyed and extremely helpful and friendly.

Drinks aren’t cheap, but aren’t excessively priced and they do an attractive cocktail list. There also doing a nice line of tapas.

Basically they seem to have taken the best aspects of inner-north watering holes and mixed it all up with a large dash of wood panelling.

With live music advertised for four days of the week (Fri-Sun) it’s got some potential to turn into a very friendly little boozer.

Definitely a spot to get a drink while waiting for take-away.

My partner & I took the pre-teen and teen kids there for dinner a couple of months back..got pretty loud (being about 8.30/9ish on a Saturday night!) but food and service were excellent..def would go back..was actually good to be able to take a coming-up-to-18 yo. out to dinner at a hybrid bar..I think he opened his eyes up to some of the stupidity across the other side! Anyway, really enjoyed it..will go again. Nice change & great atmosphere 🙂

I lunched there today with a friend. Excellent veal saltimbocca with generous helping of vegetables and shared salad, a glass or two of shiraz and efficient, pleasant service. I liked the fact that the restaurant side of the bar is carpeted so you can easily have a conversation even when the room is full.

I went there a month or so ago. Didn’t notice anything ageist about the place, seemed like a nice bar, busy but not stupidly crowed. The food was slightly disappointing, but nothing to put a whole post of my own on riotact about 🙂

I was pleased to see that the changes in smoking laws seem to be genuinely affecting people. Even outside where my group was sitting, no one seemed to be smoking, and the people coming out to fumigate their lungs felt kinds shunned.

i totally disagree, i have been there a number of times and think the staff are great, the average age that i have seen is over 25. Thats why i will be there again. NO kids being cool (so they think)

This establishment cannot just change the facade. The attitude of the staff and management MUST also change.
It appeared to me that customers over the age of 25 are ignored or treated indifferently by the inexperienced and untrained staff. Let’s hope this ‘ageist policy’ practised by the staff is sidelined under the new regime. I will give it one more try. I just loved the new purple velvet curtain!

will be good to have somewhere between pints and trendy

Ok went past on Friday night, thinking we’ll stop in for a beer. …. Went past the restaurant side of things which really looked nice and inviting …. and then to the bar section … which personally looked like shit, and not inviting at all!! … the black and white chequered floor tiles makes it look like a hard rock cafe diner from the 90’s, and felt like it had no atmosphere!!

Trinity bar for the win!!

They’re attempting to be painfully cool, by suggesting they’re subversively underground and not part of the tawdry business of being suburban or even slightly city.

Sounds a tad wankish to me. If I’m ever in Dickson and need food, I’ll go hunt out that grumpy Italian man who makes (by all reports) great pizzas.

I’m trying to understand the reason for the hyphen in “Sub-Urban”…?

Definitely sounds like a place I’ll have to try.

does the exhibitionist couple still live across the street ?

Bar-wise, I hope Belluccis can straddle the middle ground between the chalk (Tradies and O’Neills) and the cheese (Trinity and the fancy pizza joint). Dickson needs a decent pub.

I hadn’t been out to dickson in some time and when I walked past this place on Friday night, I didn’t notice it had changed. I did however notice the two large guys in black at the door.

“why the hell does a restaurant need two bouncers? Damn. Dickson is rough now.”

My younger brother (who lives out that way), said “No dumbass..its a bar now for old folk like you” and indeed it was.

I always have had some good food before the refurb but then again, I do live in Tuggernong so what would I know.

The Woden Town Centre after hours can be a lonely place but all that is about to change. While there...
*Results are based on activity within last 7 days

@The_RiotACT @The_RiotACT
On The Campaign Trail today, the Libs commit to cut elective surgery waiting times, Labor backs new schools, Pollard pumps for sport in Gungahlin, and the Federation Party wants the Port of Eden to become the Port for Canberra https://t.co/8FOvDV2Uhx (8 minutes ago)