Successful Woden Experiment to extend into next year 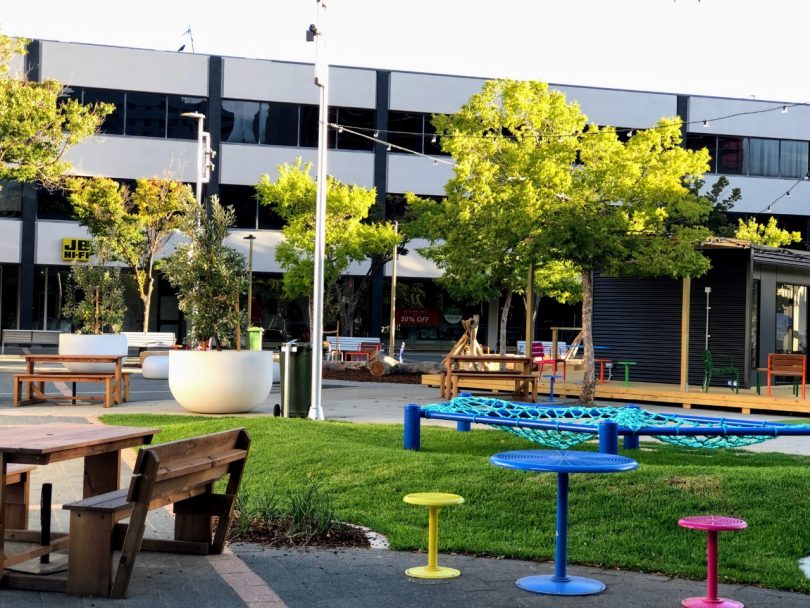 The ACT Government’s six-month experiment has been called a success. File photo.

The ACT Government’s experiment to revitalise the heart of Woden has been given the tick of approval, with the revamped Woden Town Square set to extend its stay into next year.

The Government launched the Woden Experiment in March to see if it would inject new life into an inhospitable, dreary space that had seen a decline in use over recent years.

The temporary revamp of the square included a stage for community performances, smart benches with phone and laptop charging, flexible table settings next to areas set aside for pop-up food and drink vendors, turf areas with sun loungers and an outdoor table tennis facility.

Originally intended to be a six-month enterprise, the Woden Experiment’s landscape and furniture installation was designed to transform the square into a friendly environment with more social and cultural opportunities for the local community.

Minister for City Services Chris Steel said the experiment has been a raging success, announcing that the project will extend its stay until February 2020.

Mr Steel said the town square had seen jewellery workshops set up, local businesses bring their daily meetings outside their offices and even an engagement party hosted in the revamped space.

“It’s really great to see so many people of all ages making use of the space, particularly on weekends and at times that previously would have seen an empty Woden Town Square,” Mr Steele told Region Media.

“Community perception of safety has also been found to have been greatly improved, influenced by the increased number of visitors, more eyes on the street. It also appears more children in the area have regulated people’s behaviour such as smoking within the Town Square.”

Once the experiment is completed in February next year, most of the street furniture and landscaping improvements will remain. Though the program of activities will cease and the pods may be moved to other areas of the city, Mr Steel said he hopes the space will continue to be used for events.

As the name suggests, Mr Steel said the project was a genuine experiment which may be applied to other forlorn town squares in the territory.

“The information gathered from the Woden Experiment is and will be fed into place planning activities across Government to assist to create vibrant, activated, inclusive and intergenerational public places for the community to benefit from,” Mr Steel said.

“It shows that a catalyst such as the Woden Experiment is able to promote and facilitate further positive changes in the community.”