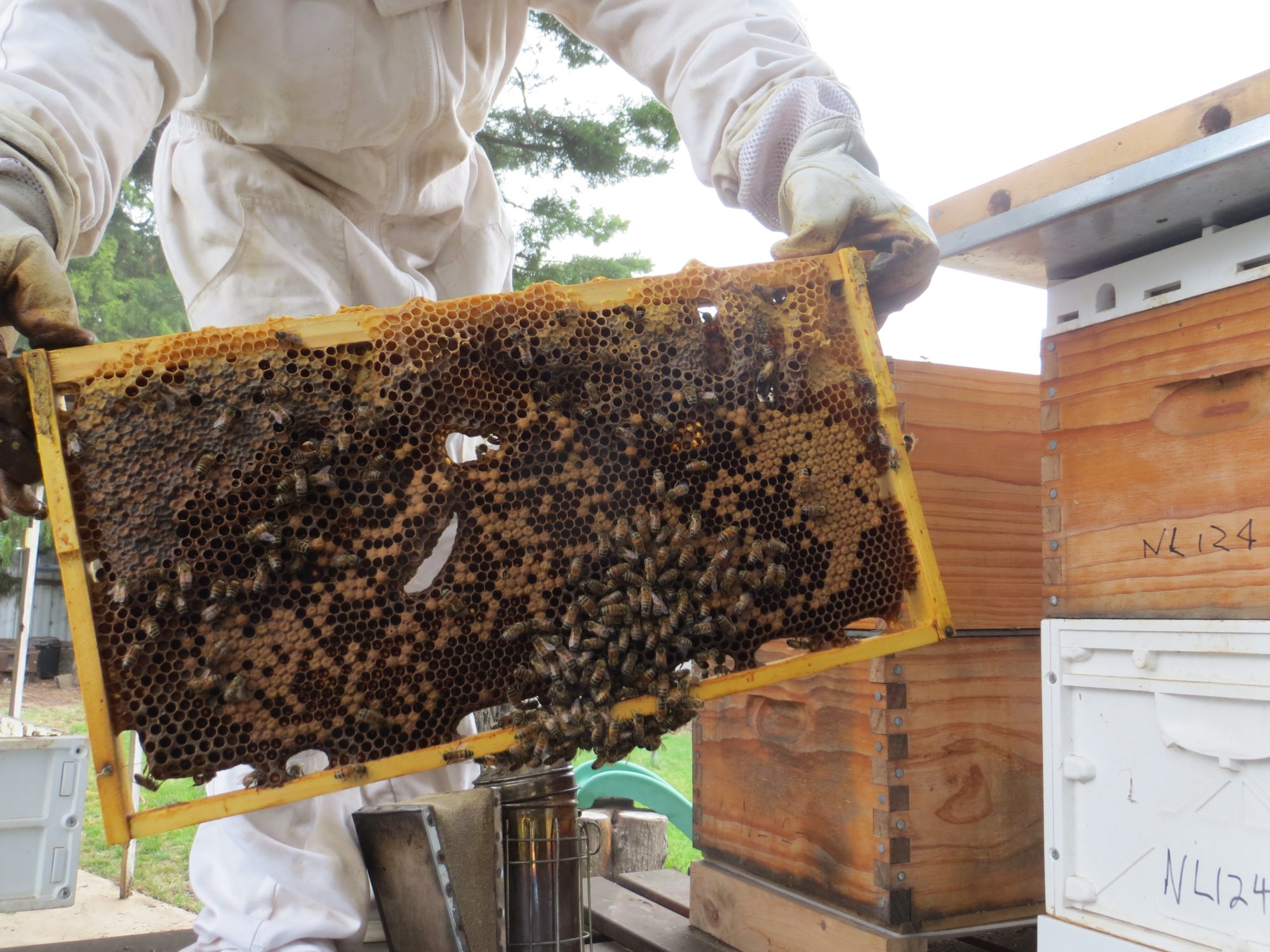 This summer’s extreme heat has killed honeybees, melted wax in their hives and caused colonies to collapse into a gooey mess.

Hobbyists in Canberra and Goulburn created cooler micro-climates to safeguard their bees, but commercial honey producers’ experience was anything but sweet.

Bee scientist and published researcher Dr Doug Somerville says once the temperature climbs into the mid 30s bees revert to collecting water, up to a litre per colony per day, which they distribute around the hive and fan to create an evaporative cooling effect.

“The normal temperature of the bee colony or brood is around 35 degrees, so if it gets into the late 30s or 40s, you actually have serious mortality of the young, developing bees,’’ Dr Somerville said.

“If the colony can’t control the temperature and the hive does get up into the early 40s, what you find is the weight of the honey collapses the wax structure and the whole colony can be collapsed on you,’’ Dr Somerville said.

“It can happen here in Goulburn, Canberra, anywhere. A lot of guys in the last month are reporting colonies are collapsing due to the heat, not able to maintain the temperature in the hive and the temperature getting too high and then the contents collapsing into a big gooey mess.” 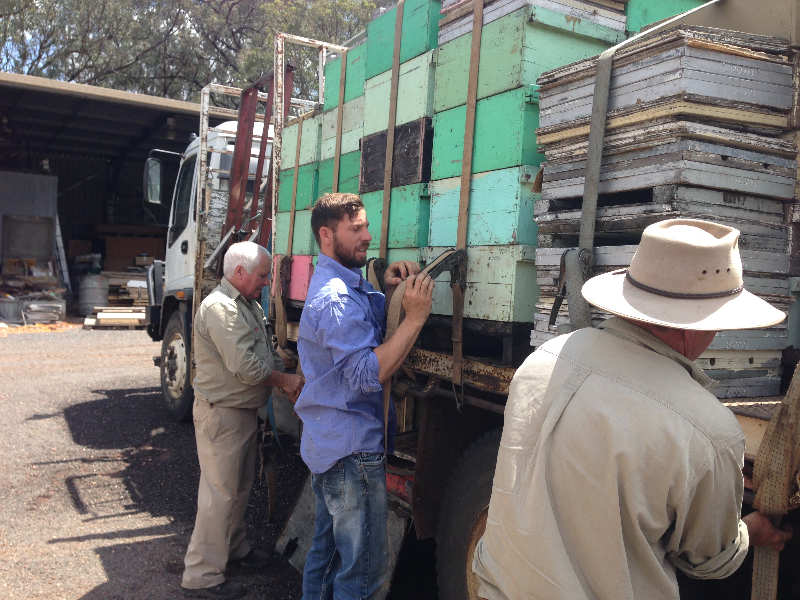 A lot of bees are stressed, and suffering diseases like chalkbrood.

“You can be in a national park or wilderness area, but you have only one species in flower, so you have to completely mono crop, and it might be a native mono crop, but that is all the bees have got access to and usually, in a commercial situation you have higher stocking rates, 80, 120 beehives in an apiary which makes it economically viable to work bees in a business sense,’’ Dr Somerville said.

After a blast of hot weather earlier this month, a sudden cold snap jolted Windellama beekeeper Bob Shaw. A semi-commercial producer with 22 hives, Mr Shaw returned to seven hives which he had left north of Boorowa for the tail end of a canola crop and flowering river red gum. He discovered one hive queen-less and wax moths moving in.

He hauled the hives back to Laggan near Crookwell for a crop of flowering buck wheat. Arriving at 11.45pm he said the weather was ‘antarctic’. “They were expecting the first frost of the season,’’ he said.

“This is the worst year I can remember for honey,” he said. “Over the past 10 years yellow box was like clockwork, flowering in October and finishing in December. On this property yellow box flowered in June, the middle of winter, with no nectar.’’

Nicholls beekeeper Carmen Pearce-Brown of Urban Honey, who has 50 hives across the ACT, fed her bees for the first time this season. Even in the bush capital Ms Pearce-Brown believes more planting diversity is needed for bees.

“We have all been doing it tough for sure. I have been wondering about the biodiversity of our urban forest and thinking about a new approach, pushing bee-friendly planting.’’
Last spring Collector beekeeper Gary Poile over wintered his 100-hive apiary on the South Coast’s white stringybarks. “That was my saving grace,’’ he said.

Moving in spring to a flowering cherry orchard at Parkesbourne, the bees rarely flew because of cold weather, and colonies receded, although he was surprised at the orchard’s good pollination.
He moved some hives to patersons curse near Gunning on land cleared after a bushfire the previous year, and recovered some momentum, but has written off the season for honey production and is re-building bee numbers and honey.

“They are just starting to do very well. I am on early flowering stringybarks, around Gundaroo,’’ Mr Poile said. “If we can get cooler nights and autumn-ish days, the bees will do well. We mightn’t get a lot of honey, but they will winter well. They will be really good, early spring sort of bees, which is what we haven’t had around here for several years,” he said.
In contrast to commercial producers, Goulburn backyard beekeeper Sze Yeen Lee has combs loaded with honey. She turned on a sprinkler and shifted pot plants underneath her two shaded hives, creating a cooler micro-climate on super hot days.

At the height of this summer husband Huw Edwards discovered a blackish cluster of about 10,000 bees outside one of her hives. They had spread outside the hive to reduce its inside temperature, after Goulburn’s overnight minimum temperature was about 28 degrees.

In the middle of Goulburn the bees have a smorgasbord of flowers, including, amazingly, a banana tree in Ms Lee’s yard.

Natasha Van Oudheusden - 1 minute ago
Matthew Johnson in that case, yes. I must admit I only quickly scanned through it while waiting for a spreadsheet to update f... View
Matthew Johnson - 12 minutes ago
Natasha Van Oudheusden i think we read into this article differently. The way i’m reading it, if the landlord breaks the re... View
Robyn Baer - 26 minutes ago
Hopefully the wording is written better than their previous amendments. View
Community 14

Jasmine Hawker - 5 minutes ago
Scotty Jeffery Why are we prioritising where the help goes? Yes Canberran homeless people should be getting support but why w... View
Graham Cox - 22 minutes ago
How are we taking these people in when we barely have housing for our current population? Why are non Australians given prior... View
Debora Gyllien - 55 minutes ago
and yet some of us who have been living here for decades and searching for support have found none. View
Property 7

Nestled among picturesque gardens, this stone and timber cottage could have been lifted straight from the pages of a children's storybook....
Opinion 29

@The_RiotACT @The_RiotACT
Barb Shannon, from #Bookham, near Yass, may have made hundreds of unique, embroidered heirloom #blankets during the past 50 years, but each one is #special to her and she hopes they will all be loved for life https://t.co/9rxXUtE0yH (35 minutes ago)