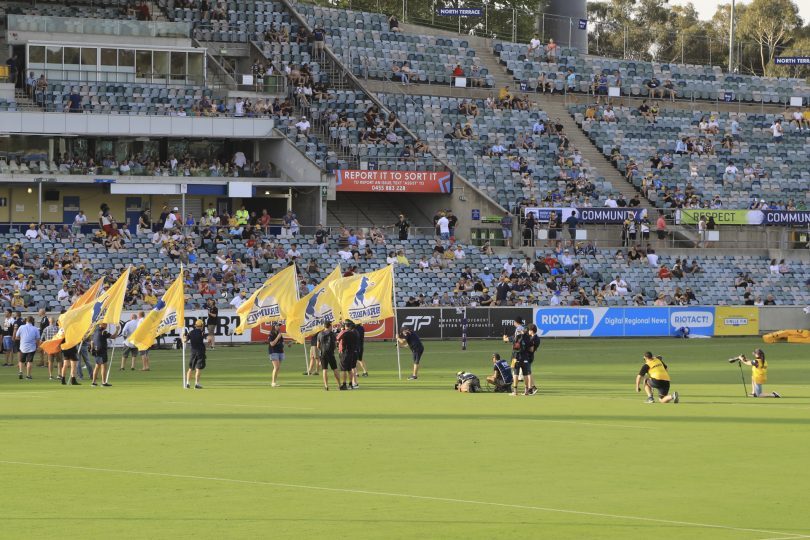 The Brumbies have listened to fans and are desperate to bring them back to Bruce. Photo: Supplied.

Brick by brick, rugby union in this country is starting to turn things around. It’s been slow progress, but the code is getting there.

Several years ago, as the game started its descent, there was a suggestion that free-to-air television was the answer as you could only see the game if willing to sign up to pay television or if you went to the game, and going to see the game live proved to be problematic for many reasons.

One was the cost of game-day tickets, food and drinks, and the second was, in the case of the Brumbies, that the team disappeared for four weeks to play in South Africa. They were out of sight and out of mind.

More recently, the concern has been the lack of regular competition, week-in-week-out against New Zealand teams, where the quality of the games is infinitely better.

READ ALSO As the Brumbies start searching for a new head coach post-2022, how much say should players have in the selection?

Now in the revamped Super Rugby competition, to be known as Super Rugby Pacific, featuring 12 teams, a number of the issues that were declared prohibitive in supporting the code in Canberra have been dealt with.

The first is the re-engagement of the five New Zealand and the five Australian teams back into the one competition, along with Fijian Drua and Moana Pasifika.

The Brumbies will play seven games at home and seven games away, playing eight teams once and three teams twice.

Effectively, the Brumbies could be playing the Waratahs and the Queensland Reds home and away in 2022.

One game a weekend will be live on free-to-air television, which provided far greater exposure this season.

And the Brumbies won’t be disappearing to South Africa and Argentina for weeks on end.

Concerning the cost of going to games, the hope is that tickets and food and drink don’t go up. The Brumbies have shown a willingness in the past to listen to the concerns of fans, so there is considerable hope that these concerns will be addressed.

I have a real concern with the depth of Australian rugby with five teams and so many young players heading overseas, particularly to Japan.

The Brumbies aren’t immune to this, with a number of players in the John I Dent Cup going to Japan.

I have concerns about the depth of the Brumbies in key positions. An example is the fly-half position. Noah Lolesio will be the first choice, but beyond him, the cupboard is looking bare.

Bayley Kuenzle and Reesjan Pasitoa are heading to the Western Force, and Mac Hansen is in Ireland.

Do the Brumbies look at bringing back Christian Lealiifano, who has been playing in Japan?

There is plenty of depth at hooker and halfback, but all it will take are some injuries, and depth will be tested.

Another issue is the player drain from the John I Dent Cup. I know of at least five high-level players from the ACT competition heading to Japan for next season.

Others are heading to the Western Force and the Melbourne Rebels.

The focus should now be on keeping these players in Canberra by providing opportunities at the Brumbies. It adds depth to the Super Rugby program.

At least there is FTA TV games, but the move to Stan Sport and its $20 a month is ridiculous. I know they are trying to compete with Kayo, but Kayo is $25 a month and has pretty much everything but Rugby and some Tennis. If the competition improves because it attracts fans then its good, but I’m not sure they’ve got that balance right with FTA and pay/streaming.

Warratahs will be able to lose even more games in this new comp. Bring it on! Go Brumbies

If the Brumbies dont have the depth no Aussie teams do. Aussie teams are young and learning will take a few seasons to catch the Kiwi’s. I think the focus should be on keeping good young players here rather than getting older players back from overseas. If they come they come but I think rugby has spent most of its resources in the past on older players and forgot about the younger talent coming through and look where we are now. Invest in grass roots and young players. The rest will take care of its self.

It’s all sounding like it will be an interesting season. Now if only we could get earlier kick off times.