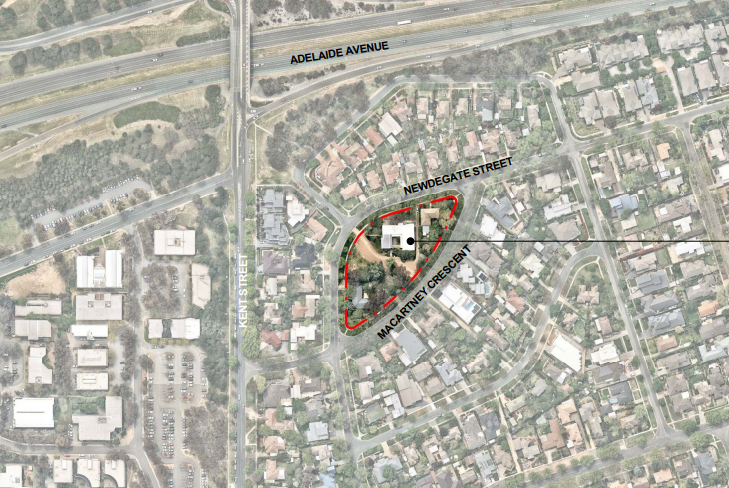 The St Luke’s site in Deakin where the Anglican Church plans to build supportive housing for older residents.

The site of St Luke’s Anglican Church in Deakin will be redeveloped into eight, two-storey supportive housing units for older residents under a development application lodged by the Anglican Church.

The application also covers the demolition of the church and two associated residences, lease variations to allow the construction of the units, landscaping and ground works; and the removal of the concessional status of the Crown lease, of Block 1 Section 30.

The 5909 square metre island block is bounded by Newdegate Street and Macartney Crescent, and has residential housing on all sides.

Purdon Planning, which prepared the application, says the site has five driveway entrances and is not restricted by easements or heritage constraints.

It says the proposed development is considered to be an excellent outcome for an underutilised asset of the Anglican Diocese of Canberra and Goulburn with minimal impact on adjacent residents, and minimal impact on traffic, noise and parking.

The intention is to deliver high-quality semi-detached supportive housing dwellings nestled in the heart of one of Canberra’s oldest and most established suburbs, Purdon says.

“The design team has prioritised the way in which the proposed development responds to the qualities of the site and integrates effectively with the low-density suburban character of the
suburb,” it says. 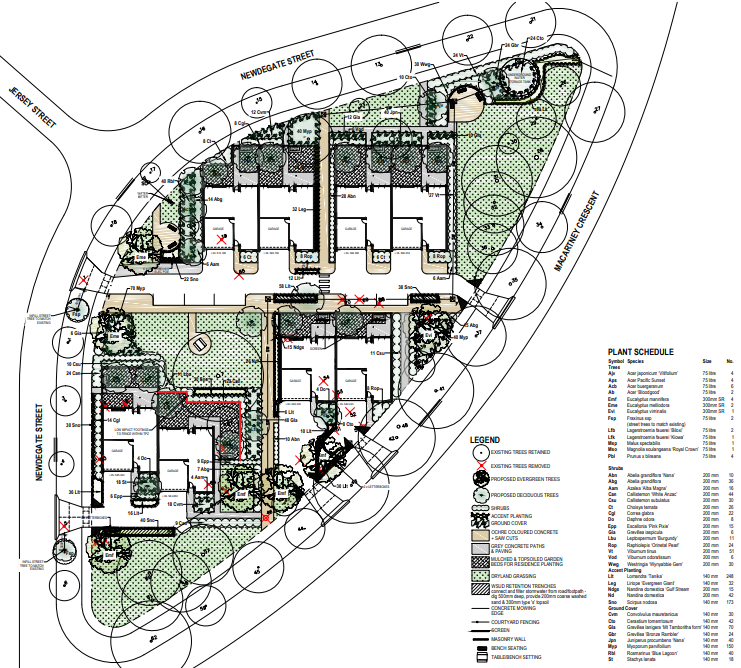 The eight dwellings are grouped into pairs and set at four different levels across the site, with drive-through driveway providing access to four dwellings to ensure level access is available to all residences, as required for adaptable units.

Each dwelling will have a double garage with access to five parking spaces in the centre of the block for visitors and service providers.

Purdon says Sellick Consultants found the proposed development would not have significant traffic generation impacts and fell below the TCCS peak hour period threshold of 10 vehicles per hour for the need to undertake a traffic impact assessment. The net traffic generation rate was found to be 32 vehicle movements per day.

It says supportive Housing is also considered to be a much-needed asset in South Canberra, with ACT Government figures showing that 23.4 per cent of all residents in Deakin are over the age of 65.

The residences will be marketed to over 55-year olds as ‘ageing-in-place’ accommodation, with all eight dwellings being able to be altered for wheelchair use and the master bedroom being on the ground floor. 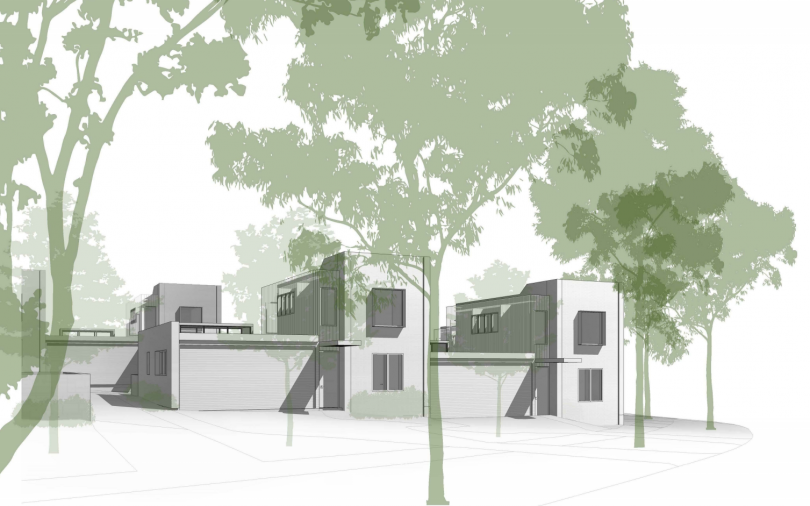 Purdon says the diocese will fund all demolition and construction works and retain ownership of the site. Sub-leases will be purchased by the individual property owners, who will be
responsible for general outgoings and utility costs, with the diocese maintaining the grounds.

The dwellings will be advertised and sold on the open market under age conditions.

No aspects of the existing church have been included into the development plans but the project team may integrate existing features.

Perry Matthew - 38 minutes ago
Great opinion piece, the drivers are being extremely greedy. Shame that Suez can't can them (pun intended) and hire folks who... View
Matt Donnelly - 5 hours ago
ok commie View
Shaun Coash - 5 hours ago
Michelle Ntz and now there is an article. Lol View
Food & Wine 8

Nicole Kopplemann - 6 hours ago
These guys catered an event I was at today. Fantastic food. View
Opinion 3

Lee McDowall - 8 hours ago
Nurses should be paid so much more. Garbos think they have a tough job, swap for a day then ask for 12% over 3 years. Nurses... View
Roberta Lynne Anning - 9 hours ago
Give them the same pay that the garbos get, and give the garbos the same pay that the nurses get. They just might shut the he... View
Rodney Thompson - 19 hours ago
Someone who actually deserves a payrise. View
Community 22

Clare Jones - 16 hours ago
Why say these are open when the two we've been to still have temporary fencing and one even still had a tractor inside the fe... View
Business 5

Ashley Wright - 19 hours ago
Chris Olsen actually Clinton was right. William Hovell drive had the limit lowered between Coulter Dr and Bindubi street beca... View
Tolga Altinbas - 22 hours ago
Because one is a roadwork sign. And the other one is always there on the pole View
Wang Chow - 23 hours ago
My guess is that they changed the speed limit in Chisholm/Richardson because its cheaper than putting in more speedbumps that... View
News 21